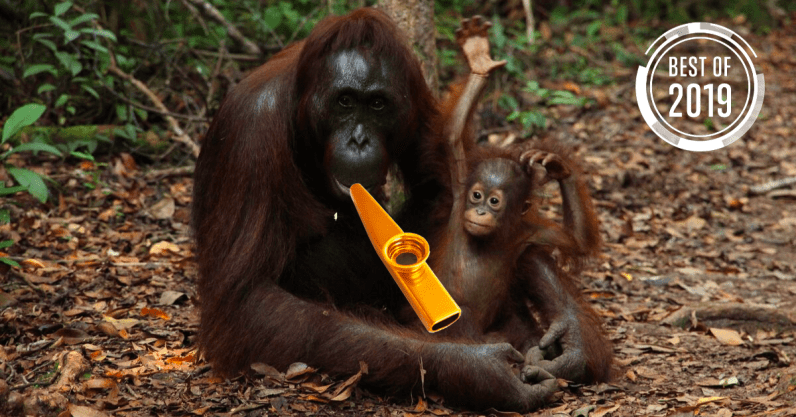 A kazoo might seem a world away from the spoken word. But our ability to produce its buzzing, Donald Duck-like sound at will was key in us ever developing the ability to speak at all. And while our capacity for speech is unique, my colleague Robert Shumaker and I have used the novelty instrument to show that great apes aren’t far behind.

Speech is one of the defining marks of humanhood. It is the interface of our social and societal relationships, and the baton through which individuals and generations pass information and knowledge from one to the other. Yet, how our species – and our species alone – developed such a powerful method of communication remains unclear.

Perhaps chief among the necessary tools for speech is voice control. That is, the uniquely advanced ability to engage our vocal folds to produce sounds at will, as opposed to the reflexive screams and cries that other animals produce as automatic responses to changes in their environment and physiology.

Scientists long thought that the capacity of great apes to control their voice was just as limited as that of their fellow mammals. However, recent evidence is suggesting that these views were misguided.

For instance, great apes can mimic the rhythm of speech, producing babbling vocalizations that could easily be confused with those of a Disney cartoon character (as in the video above). They can also match the pitch of a human voice (below). Such feats would be impossible if great apes could not deploy and use their voice on command in similar ways to us.

To find out more about these abilities, we gave captive orangutans at the US’s Indianapolis Zoo the opportunity play a membranophone — a class of musical instrument that includes the kazoo.

Kazoos and other membranophones are unique in that despite their resemblance to a flute or a whistle, merely blowing a constant stream of air into them produces no sound. To activate the instrument, the player must hum or talk into the kazoo. This is because it is the bursts of air produced by our vocal folds opening and closing when we vocalize that make the membrane of the instrument vibrate, and the instrument play.

In our study, some of the orangutans activated the kazoo within minutes, producing sounds of varying pitches and durations in response to kazoo demonstrations by the human experimenters. The speed with which these orangutans changed the quality of their voices shows that they were producing the sounds at will, rather than through training – which, as any dog trainer will reassert, requires months of reflex building and conditioning.

These findings show that orangutan voice control lags not far behind that of humans. They confirm that the vocal abilities of great apes have been largely underestimated.

The fact that only some of the orangutans managed to play the kazoo shows us that the capacity and/or motivation to demonstrate vocal control differs between individuals. So one great ape can never be representative of the vocal abilities of a whole species. To understand the vocal control of apes further, scientists should develop tests tailored to match each individual ape’s limitations and drive. This won’t be a surprise to parents, teachers, and linguistic therapists, who know that children develop speech at different rates and manners, despite sharing virtually the same environment.

The call of the wild

Although precise tests such as these are only possible in controlled settings with voluntary participation from captive individuals, evidence suggests that wild orangutans also use vocal control in their natural environment to communicate and pass information between individuals and generations.

For example, wild orangutans can modify their alarm calls with hands and leaves to make them sound bigger, depending on how dangerous the predator they encounter is. Wild chimpanzees are more likely to produce snake alarm calls when group members are unaware of the threat, and selectively inform high-ranking group members that food is available – both indicators of intentional control of vocalizations. Here’s a slow-motion video of how the vocal folds open and close to produce air vibrations when we speak.

More recently, I showed that wild orangutan mothers delay alarm calls in response to predators until there is no danger, before then informing their infants of the danger that just passed through the forest floor below. Such an ability not only indicates some degree of vocal control, but also another key prerequisite for speech – the ability to communicate about the past.

Understanding the extent to which great apes can “speak” offers clues as to how and when the various skills required for full-blown speech emerged in our evolutionary lineage. Scientists previously thought that great apes didn’t have the required brain circuitry. Now, it seems that they do. The question now is why our species used the last few million years to hone these neural capabilities, but our close cousins didn’t – or weren’t able to.

Having spent much time around orangutans, I’m certain that they possess a great many more skills and abilities than current science gives them credit for. They are truly fascinating and intelligent creatures, and we must make every effort to conserve and protect them and their habitat – not just to understand better our place in the natural world, but as a mark of respect for theirs.

This article is republished from The Conversation by Adriano Reis e Lameira, Marie Curie Fellow, School of Psychology and Neuroscience, University of St Andrews under a Creative Commons license. Read the original article.