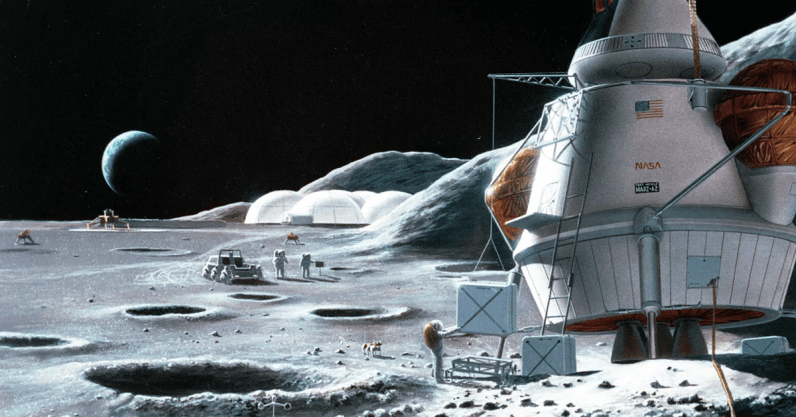 Half a century after humans first walked on the moon, a number of private companies and nations are planning to build permanent bases on the lunar surface. Despite the technological progress since the Apollo era, this will be extremely challenging. So how should you get started?

The conditions at the lunar surface are extreme. The moon has a 28-day rotation period, resulting in two weeks of continuous sunlight followed by two weeks of darkness at most latitudes. As the moon lacks any significant atmosphere to distribute heat from the sun, temperatures during the day can rise to 130°C. Meanwhile, the coldest nighttime temperatures have been recorded as -247°C.

The lack of a protective atmosphere also means there’s little protection against harmful cosmic radiation. This means moon inhabitants would have to construct buildings with walls sufficiently thick to block radiation from coming in and use cumbersome spacesuits when leaving the facility.

The walls must also be strong enough to withstand the pressure differences between the outside and inside and to cope with the impact of micrometeorites – tiny specks of rock and dust crashing onto the surface at high speeds.

These considerations mean that, when we expand the first bases and start actually building structures on the moon, lunar concrete, which is a mixture of sulphur and aggregate (grains or crushed rock – normal concrete is aggregate, cement and water) would be a good option. That’s because it’s non-porous, strong and doesn’t require water, which is in short supply on the moon.

Another problem is the low gravity on the moon – only a sixth of that at Earth. Over time, this can cause problems such as muscle and bone loss. Any permanent lunar settlement must minimize these risks, for example by making exercise a requirement.

Although few space agencies have released any details about their plans yet, we can probably assume that the first bases on the moon will have to be pre-built and transported to the moon from Earth, so they can be used right away.

Any such base must reliably maintain breathable air, meaning oxygen must be provided and carbon dioxide must be removed. The International Space Station (ISS) uses electrolysis to break water down into oxygen and hydrogen and vents captured carbon dioxide into space.

An essential ingredient for any base is a power supply. The ISS typically supports six astronauts when fully crewed and requires 75kW to 90kW of power for everything from life support and powering scientific equipment to water recycling. Depending on the number of lunar colonists and the tasks they carry out, this power requirement could be considered an absolute minimum.

One option would be to use solar panels. But if the base is located in equatorial regions, then solar panels will only produce power for 14 days consecutively, followed by two weeks of darkness. Colonists would therefore have to store power in batteries and use it during the dark period. If the base was placed in the north or south pole, however, solar panels would receive constant sunlight.

Nuclear reactors are a more reliable alternative to solar power. In recent years there’s been a lot of interest in miniaturized fission reactors. The problem is that even small reactors can weigh several tonnes, which is a problem given that they’d need to be transported from Earth. There is also the risk that we made end up spreading nuclear material on a currently pristine location.

Another possibility are radioisotope thermal generators. These produce energy by generating an electric current from the temperature difference between a radioactive material and a cooler external environment. On Earth, these are not very effective as room temperature is fairly warm, but in the shaded areas of the moon it gets very cold.

These devices have often been used as a power source for deep space probes, which travel too far from the sun to harness solar energy. But for lunar colonization, a very large number would be required as they are not very efficient at converting heat into electricity.

Each potential power source has its advantages and disadvantages, but the solar panels are the best option if you can place them in the right location.

Clearly, the inhabitants of a lunar base would have to survive on a primarily plant-based diet. Meat and other foods would have to be provided by supply ships, as agriculture requires a large infrastructure in place to be practical. It is, however, theoretically possible to grow plants in lunar soil – computer models show tomato and wheat could germinate.

The plants will require substantial amounts of space to be able to provide enough food – the base must be made big enough to accommodate for this. While many nutrients for crops are available in lunar soil, the absence of nitrogen, which is essential for plant growth, remains a significant challenge. There are also high levels of metals such as aluminium and chromium, which can be toxic to plants.

We can remove some of these problems by using a technique known as hydroponics – growing plants in water rather than soil, with LED lights providing artificial sunlight. For example, this can be performed in an internal windowless room.

A disadvantage of hydroponics is the amount of water required. Water can easily be recycled using current techniques from sink and shower runoff, sweat and urine, although inevitably some will be lost and need topping up. Luckily it is possible to extract modest amounts of water ice from the moon – especially at the poles.

The final major consideration for any future lunar colony is health and safety. The potential risks of exploration are well documented. We have trouble recovering ill people in inaccessible locations such as the Antarctic – where medical support is limited in the summer months and virtually non-existent in the winter months. This suggests that a lunar base would have to be medically self-sufficient, requiring more weight to be sent to the moon in the form of medical equipment and trained personnel.

Ultimately we have the technology to make a lunar base viable, but no amount of innovation can completely negate the risks involved. Whether such a base goes ahead or not will depend on this calculation perhaps more than any other. The question is whether we as a society have the stomach for lunar settlement, as well as lunar lettuce, or not.

This article is republished from The Conversation by Ian Whittaker, Lecturer in Physics, Nottingham Trent University and Gareth Dorrian, Post Doctoral Research Fellow in Space Science, University of Birmingham under a Creative Commons license. Read the original article.

Read next: 8 tips to eliminate distractions in your workplace