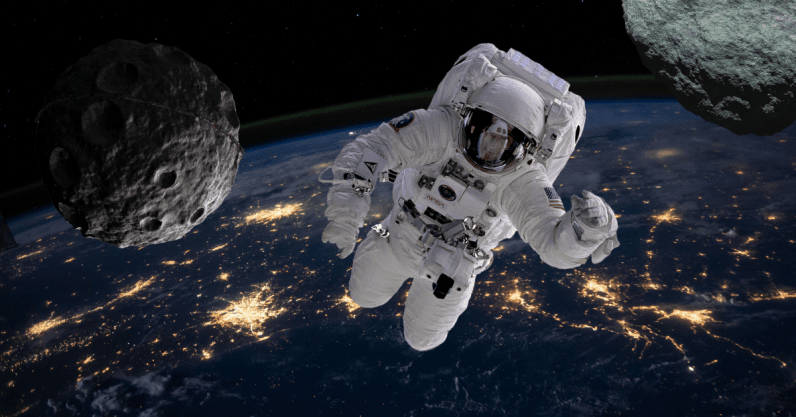 On the same day that the Earth survived an expected near-miss with asteroid 367943 Duende, Russian dashcams unexpectedly captured footage of a different asteroid as it slammed into the atmosphere, exploded, and injured more than 1,000 people. That day in Chelyabinsk in February 2013 reminded the world that the Earth does not exist in a bubble.

Asteroids provide a direct connection between the Earth and interplanetary space. Craters such as the Barringer Crater in Arizona are a stark reminder. The dinosaurs died out due to a different impact not far away in the Gulf of Mexico. But elsewhere in the universe, asteroids may actually transport life between different planets.

While the world reflects on the first flight to the moon and our future on Mars, we think asteroids – the so-called “minor planets” – deserve recognition. Here’s why:

1. They could kill us

We did not see the Chelyabinsk meteor coming until the Russian dashcams caught it. Fortunately, nobody died as a direct result of the explosion. Next time we may not be so lucky. Even for known asteroids, there’s at least a very slim possibility that they may collide with Earth over the next few hundred years. There are currently six known asteroids with at least a 0.1% chance of impacting the Earth before the 23rd century.

2. They could contain water

Astronomers debate the origin of Earth’s water, and whether it was delivered to our planet billions of years ago by comets and asteroids. NASA’s Dawn space probe visited the largest known asteroid, Ceres, and detected water on its surface. In fact, NASA classifies Ceres as a former “ocean world”, albeit one where the ocean of water and ammonia has since frozen and reacted with the silicate rocks to form mineral deposits which now pepper the landscape.

3. They reveal how the solar system formed

The surfaces of asteroids don’t erode like rocks on Earth because asteroids lack atmospheres. That means craters on asteroids are better preserved over long timescales, and give evidence of impacts from the last four billion years which would have long since washed away on Earth. In this way, asteroids can act as time capsules for evidence of the ancient universe.

The further back you go in time the trickier it becomes, as asteroids change in the hundreds of millions of years after their formation, shifting their positions and suffering collisions.

4. They reveal how the solar system will die

More than six billion years from now, when the sun uses all of its hydrogen fuel, it will start to change, eventually becoming a white dwarf – the end state for most stars in the Milky Way galaxy. During this transformation, the sun will briefly enlarge enough to swallow Mercury, Venus and maybe Earth. But at least five of the sun’s planets and many asteroids will survive this transformation.

The asteroids then play an important role, as they are “kicked” towards the white dwarf by the gravitational field of the surviving planets when the asteroids approach them too closely. We regularly observe the broken up remains of asteroids inside the atmospheres of other white dwarf stars, allowing us to determine the asteroids’ chemical composition by performing an autopsy from afar.

This technique is the most direct way we can probe the chemical composition of planetary systems outside of our own. Asteroids in our own solar system might then provide the best means for future galactic civilizations to find out more about the planetary bodies orbiting our future sun, long after Earth is gone.

5. They could transport life

We know the destructive nature of an asteroid impact, but what if it could instead act as a means of escape? A large enough impact by an asteroid would impart enough energy to eject material from the planet’s surface. If the planet is habitable, some of the ejected material could become a transportation vessel for hardy microorganisms, which could stand a chance of surviving the launch into space.

The TRAPPIST-1 system is just one example. This is a clutch of seven planets orbiting a star 12 times smaller than our own sun, a mere 39 light years away. All of the seven planets are roughly the same size as Earth and clustered fairly close together – meaning bacteria could feasibly hop between them if disturbed by an asteroid on a nearby planet. With favorable conditions in place on the destination planet, life could have a much better chance of surviving the journey than if a living organism was ejected from Earth and arrived on a different planet in our solar system.Of course, the launch is just the start of the overall adventure.

To complete the hop from one planet to another, life must withstand the harsh conditions of space during its interplanetary voyage. Upon reaching its destination, it must survive entry to the new planet, including another surface impact. The wide range of planetary systems discovered by astronomers in recent years could help. Some of these are tightly packed with potentially habitable planets close together.

The many hurdles involved in this interplanetary hop make an arduous battle for microorganisms looking for a new home. Nevertheless, the theory will continue to generate intrigue as astronomers uncover yet more weird and wonderful worlds shaped by the influence of asteroids. With each new world comes a greater understanding of the key role they play in shaping our universe.

Read next: Watch the first episode of ‘Hash It Out’ with eToro’s Yoni Assia and IOTA’s Dominik Schiener