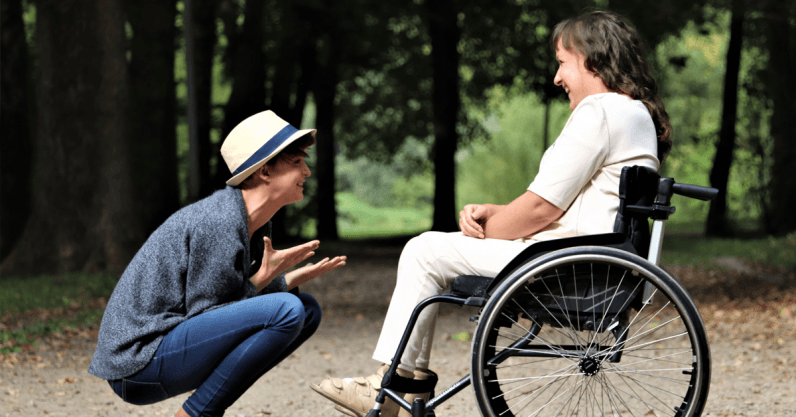 When I search for “bipolar mother” on Google Images, I find a lot of women with their heads in their hands, their crying children in the corner. These images actually understate the broader stigma of being a bipolar mother — the stories that I hear daily about interactions between mothers and their families are disheartening. As a bipolar pregnant woman, I was terrified that my first psychiatrist was right when he told me I should never allow myself to get pregnant; he said I might kill my baby.

When empathy and understanding are not part of our daily life, we suffer. But social media has filled in that chasm — and it can provide a lifeline. I don’t drive on freeways, and while getting around Southern California has always been intimidating for me, with an infant it’s become even more difficult. Social media can function as the support group and family that most of us don’t have, or have trouble accessing physically.

While pregnant, I started to follow Elsie Larson’s entry into motherhood on Instagram. Larson is known for her popular DIY blog on “A Beautiful Mess” and for the app “A Color Story.” She adopted a girl with albinism from China named Nova. They painted together, giggled together — they were what I wanted to look like with my little girl. I decided that when I had my baby, I would try to Elsie Larson it and forget about those scary Google images.

I joined Instagram. I didn’t know what typical people were doing there — I saw a lot of pictures of food. But popular hashtags like #disabledandcute and #disabledandsexy mean that a diverse group of disabled people — different genders, nationalities, disabilities — are calling their bodies sexy with the same tag. All of these people are connected by disability.

Michelle Griffith, owner of the Spoonie Sisters shop on Etsy, explains it this way: “Those with disabilities learn what it’s like to live with other disabilities. It’s an amazing supportive community. They truly understand your struggles, victories, frustrations, excitements.”

Hulya Marquardt, a double amputee and course manager, finds a correlation between how many pictures of disabled people one is able to see and the degree of acceptance they embrace. “It becomes normal,” Marquart tells me. “People get used to seeing other people in wheelchairs or with missing limbs.”

Images like these are influential. Kārlis Podnieks, a paraplegic basketball player, was inspired by photos he saw online. “As an athlete, I always have had examples,” he says. “So I try to be that example now. Instagram gives me a way bigger platform to be an example for a bigger audience.”

The dual effect of this dynamic is to simultaneously manifest an actual community — you and I are not alone — and to build self-esteem — you and I are “normal.” A bipolar woman posted on Instagram that she hated taking her medicine. One day later, this started an expanding conversation about how we are all so grateful that bipolar is a treatable disorder, despite the real physical and emotional hassle that taking or changing medicine can cause.

Of course, some people with disabilities are unable to access the internet at all. And for those of us who can, connecting online still has its downsides — social media spaces can be both dangerous and upsetting, and personal boundaries are poorly defined. I get lots of responses to my pictures asking if it’s really true that I’m bipolar and a mother because other users, too, have been warned not to have children.

Recently, I received a message from a woman with bipolar disorder asking if she could also get married and have children. I sent a picture of my baby, asleep on my lap, and told her that I was properly medicated. She sent me a self-harm picture of her wrist with the words: “Look what I did.” I told her that was unacceptable and if she did it again I’d have to report her.

When guys try to hit on me on Instagram, I ignore them at first. But if they continue, I block them. Once I started a conversation about what to do about insomnia. People were chiming in with all the things they do to sleep. But one man — who was mad that I wasn’t following him back — wrote, “Try a shotgun.”

Sometimes people ask for my cocktail of medications so they can be as stable as I am. I’m glad to describe what works for me, but I make it clear that different meds work differently for different people. I always tell them the same thing: this is the best time in history to be bipolar, but it’s just about finding what works for you.

Like Kārlis Podnieks, I’ve wanted to be an example for others since finding this diverse support community. I don’t want to be a victim. My desire to set an example has helped me move away from people who demeaned me (intentionally or not) and spend more time in a more supportive climate, even if the support is digital. My digital spaces help me feel that I’m protecting myself in an otherwise hostile environment.

Elsie Larson is setting an example for me to follow: when she announced that she had been matched with a baby with albinism, the increased traffic to her blog crashed her site. Though she talks openly about albinism and her daughter’s sensitive eyes, no one is obsessed with her daughter’s disability. With every image on Instagram, Larson and Nova normalize it. We’re obsessed with Nova’s sunglasses, her bell-bottoms, and her three stuffed pigs, all named Piggy.

I have experienced what Ben Clark, another person in my online social sphere who calls himself “your friendly paraplegic,” explains this way: “Having the platform to do this has really helped not only others but myself, giving me the opportunity to learn about myself.”

During the terrible days of a med change, I removed myself from my daughter for her safety. I turned to Instagram for support. I didn’t post happy photos to pretend it wasn’t happening. I posted thoughts and images of how I felt in a “bipolar middle” — the middle of a potential relapse. I showed what my house looked like during a recovery and a list of my med-change mistakes, and I talked about what I should have done differently.

The irony is that the digital world feels more real to me than the real world has ever felt — this digital world includes so many of us, and it shows our strengths and helps us deal with our weaknesses. I have found not only friends on Instagram but collaborators as well. I’ve asked people to be a guest on my blog and sell “Meet My Meds” T-shirts, which list the medications that help make us who we are.

Knowing that I’m part of this becomes a touchstone, something I can rely on when I’m feeling great or not so great. No matter the time or day of the week, I can find someone going through something similar to what I’m going through. A comment on a picture or a direct message starts a dialogue. This centers me — it helps me be honest about who I am, and about what I can and cannot do every day.

I can’t wait for everyone to catch up and learn from us. I long for the day when a Google search offers images of a “bipolar mother” in the same context as a “working mother” or “CEO mother” or “astronaut mother.” After all, the moon is within our reach.

Read next: Xiaomi's Mi Band 4 fitness tracker is swimproof and only $25