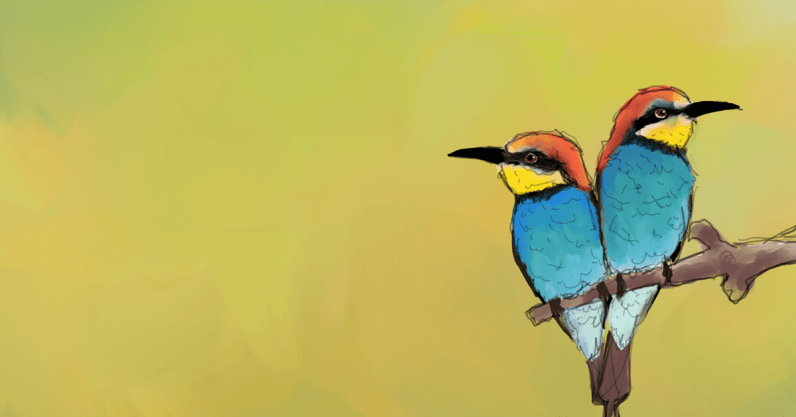 Though much is known about where and when birds travel, a lot less is known about the composition of flocks and how long they stay together. Do birds come together in flocks by chance? Do they actively choose flock members?

It’s difficult to understand groups without being able to observe them directly. But advances in technology are changing this. Individual birds can now be fitted with small tracking devices called geolocators which store data from one breeding season to the next. When the bird is recaptured, the data is then downloaded and used to reconstruct the bird’s migratory pathway.

Geolocators are useful for tracking the location of individual birds. But they lack the spatial precision to investigate their behavior. So researchers at the Swiss Ornithological Institute added pressure sensors to geolocators. That’s because pressure is an indicator of altitude, and rapid changes in pressure can tell us when a bird is flying and how high.

In a study published in the journal Current Biology, we used these pressure loggers to track the behavior of groups of migrating bee-eaters. We were able to monitor how these birds moved as flocks, something which was impossible until the development of the new loggers.

The technology records how the individual birds are behaving. It allows researchers to see which ones are doing the same thing at the same time – in other words, which ones are making decisions together and coordinating their flight, and therefore belong to a flock.

Most surprisingly, we found that birds can spend long periods travelling together with the same individuals, even rejoining each other after separations.

What the data showed

We fitted 29 loggers on European bee-eaters (Merops apiaster) in 2015 and 2016. The species is very sociable. They breed in large colonies. They also sometimes raise young that are not their own, deciding which birds to help and how much assistance to offer. The species has also been shown to cooperate with other bee-eater species to mob predators and search for food.

So we hypothesized that they were also likely to socialize during migration.

The data confirmed this theory. We noticed that not only were some of the tracked birds flying and stopping at the same time, but they were also hitting the same altitude simultaneously.

This meant the birds were sharing the decision to fly or not; to go up, or down, to make slight shifts or to remain at the same altitude. And this wasn’t happening occasionally over the course of a few hours; the behavior was noted over months at 30-minute intervals.

Such patterns could only occur between birds interacting within the same flock.

Data also showed that 49% of the tagged birds migrated 14,000km together from Germany to the Congo Basin and back. The rest split while crossing the Sahara. But 89% came back together again in Sub-Saharan Africa, locating each other despite a month spent travelling 5,000km separately.

In Africa, all bird groups would repeatedly separate for one to five days, then come back together again before migrating back to Europe together. The birds that reunited were individuals that had previously spent time together.

Even in the breeding grounds, we found that European bee-eaters preferred the company of some individuals over others – and these tended to be the individuals with whom they would migrate.

Most surprisingly, none of these birds had previously been caught in the same burrow as chicks or adults (over 95% of the population was monitored by researchers), and were not part of the same family unit.

Two pairs of birds also bred together after migrating to Africa in the same flock.

This is some of the first evidence we have of birds remaining in long-term flocks with non-family members of mixed age and sex.

Waterbirds such as cranes and geese can also migrate in stable multi-family flocks, but later separate into family or juvenile groups once they arrive at their destination. Bee-eaters, however, remain with the same non-family members throughout the year. In a manner of speaking, they form cliques.

Most likely, younger birds benefit from the knowledge and guidance of older birds, allowing them to share information on migratory conditions, to change their behavior accordingly and to adapt to changes in conditions.

Furthermore, the species soar-glides during migration. Birds identify thermal updrafts, navigate within these to gain altitude, and leave at the right moment to make it to the next thermal. Young birds, however, often leave thermals at the wrong moment and lose momentum.

In fact, it is remarkably difficult for birds with different experience levels to remain together for longer than a few days, unless they compromise and wait for each other.

So staying together appears to be a deliberate strategy in bee-eaters, and it is likely that cooperation brings benefits beyond migration. Cooperating could also allow bee-eaters to search for food, defend territories and fend off predators.

Previously, most birds were thought to be guided by their genes during migration: any birds taking “bad” migratory routes would die, while the ones taking “good” routes would survive to pass their genes onto their young. How else could a cuckoo find its way across Europe and Africa when it had never met its biological parents?

Our research, however, shows that the picture is a little more complex, and that there is a spectrum of migratory behaviors ranging from genetically-driven (as is the case of the cuckoo) to experience-driven (as is the case of cranes). Knowing that some bird species prefer to migrate with “friends” changes the way we think about the mechanisms that shape migratory behavior.

The ability of birds to survive changing conditions will be clearer when we understand what drives their movement from one environment to another.

This article is republished from The Conversation by Kiran Dhanjal-Adams, Postdoc, Centre for Ecology & Hydrology under a Creative Commons license. Read the original article.