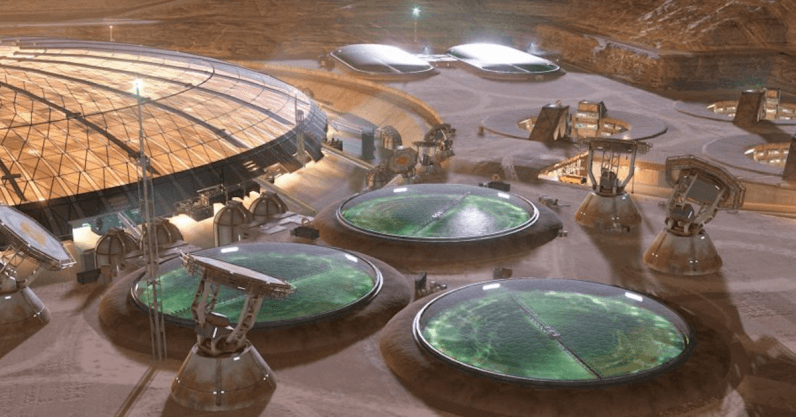 NASA spent much of the 20th century commissioning painters and illustrators to imagine the future of space exploration. When Jeff Norris, the head of Mission Operations Innovation at NASA’s Jet Propulsion Lab (JPL), wanted a way to inspire a new generation of potential engineers, scientists, and astronauts, he turned to a modern alternative to those artists: a games developer.

“They were looking for an artist’s take,” explains Jeff Lydell, an executive producer at the Vancouver-based game studio Blackbird Interactive. “The theme of it was re-creating the art that Chesley Bonestell had generated for Wernher von Braun when they were trying to publicize the Apollo missions.” In the 1940s and 1950s, Bonestell’s paintings of distant worlds and the imagined technology used to explore them provided many people’s first real look into space. Published in magazines like Life and Collier’s, the illustrations helped feed a growing appetite for the space program, featuring imagery that was at least partly based on science fact.

Norris was a fan of Blackbird’s work on the critically acclaimed Homeworld science fiction strategy games, and he wondered if the company might be interested in taking a step closer to science fact — modeling the distant Mars in the not-so-distant future by using the same combination of technical and artistic creativity that the company’s designers had exhibited in developing their games. After speaking regularly with the Blackbird team, the project grew from mere passive imagery to what Lydell calls an “interactive kiosk”: not a complex and hyper-detailed simulation but an accessible, interactive, partly hypothetical vision that is nevertheless still backed up by topography, documentation, and mission plans from NASA.

The result, Project Eagle, shows a fully functional Mars colony in the year 2117. The settlement has been built up since the first NASA landing in 2034, and now more than five thousand people live, mine, and research on the Red Planet. Most of them are concentrated under a large domed superstructure, but there are also outlying algae farms, launchpads, and reactors. A click of a mouse gives data on each structure and its purpose, while an overlay reveals hidden subterranean infrastructure, including a well bored hundreds of meters down. Utility vehicles crisscross the landscape (such as Gale Crater, modeled using terrain data from the Mars Reconnaissance Orbiter); a day-night cycle shows a distant sun casting a blue evening light (a best guess, based on photographic data); and a shuttle bound for Earth arcs off into the sky.

That shuttle, says Blackbird chief operating officer Eric Torin, is an artistic flourish, but it’s still something created with NASA’s blessing and oversight. Innovators at NASA “are the ones who picked the landing site,” says Torin. “We took license in pushing the technology and where the base might be into the future, but without violating any major principles,” he continues. Blackbird’s original concept was much closer to the recently decommissioned space shuttles, but then NASA reminded them that the atmosphere on Mars is too thin for such a vehicle to gain lift. For the same reason, drones were also removed in an early revision. Out, too, went solar panels, because NASA engineers think that energy would instead be generated by powerful nuclear reactors sunk into the planet’s surface, with most other structures existing partly or entirely underground in order to protect their inhabitants (and the food that they grow) from radiation.

However, a quick pan across the Martian surface also reveals a collection of smaller surface structures, which Torin calls “the Old Town.” This is how the designers imagine the initial settlement, 80 years old and long outdated by 2117. It’s the seed from which the colony grew: the site where the Mars pioneers arrived, building their equivalent of frontier log cabins using technology and tools much closer to what we have today. Granted some artistic license, Blackbird has created a simulation that often prioritizes aesthetics over accuracy, but, as in Bonestell’s work, the point is to inspire. Not all of the details have to matter.

Project Eagle is no one-off. It joins an ever-growing portfolio of interactive experiences that JPL has commissioned, including 2012’s Mars Rover Landing for the Xbox. There’s also OnSight, a virtual reality tool created in collaboration with Microsoft, which uses data and images sent back from the Curiosity rover. While OnSight is now part of “Destination: Mars,” an interactive exhibit at the Kennedy Space Center that places visitors on a virtual Mars, it was originally commissioned to create a space in which scientists could work. Many of the simulations and tools that JPL has commissioned weren’t designed to articulate NASA’s aspirations to others but to give the agency’s own staff different ways of looking at their work.

“Science fiction pushes reality,” says Victor Luo, operations lead at JPL’s Ops Lab, which boasts an impressive collection of Mars representations and simulations, project tools, and even a mobile app. “These things, even though they’re not necessarily 100 percent realistic or accurate, are driving the dreamers, the technologists, to push forward toward a potential future.”

There is at least one debate that no amount of simulation can get to the bottom of, though: Exactly what color is the light on the planet next door? How blue are those blue sunsets? What is the precise tint of the soil? “You get black-and-white source data from NASA,” explains Lydell, the Blackbird executive producer. “If you see NASA images [of Mars] that are in color, they’ve done the work to put that into color based on analyzing filter data across the cameras. It turns out that the scientific community is hugely divided on what is the right color of Mars.” It’s space science’s equivalent of the 2015 controversy over that black-and-blue (or white-and-gold) dress.

Lydell concedes that, in the end, there is really only one way to settle the question: “If somebody wants to prove us wrong on the color of Mars, they’re actually going to have to fly a human there to do it,” he says. “And that was kind of the whole point, wasn’t it?”

This story by Paul Dean originally appeared on How We Get To Next, a non-profit project interested in exploring the intersections between science, technology and culture, and how those things are changing the future. Follow them on Twitter, Facebook, and subscribe to their newsletter.