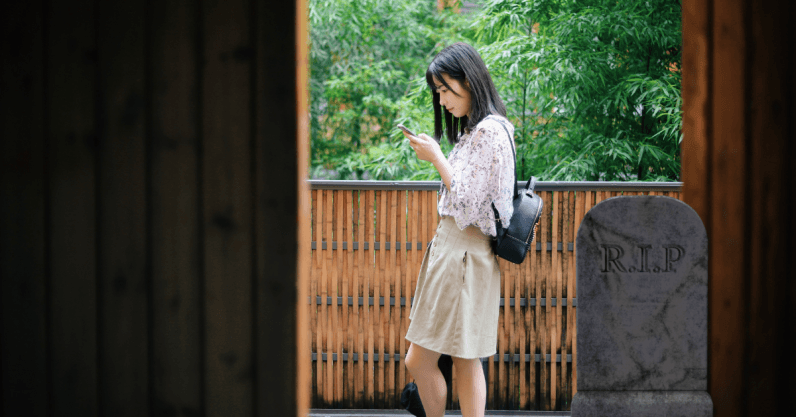 I’m in a London branch of the Apple Store, about to buy a pair of Apple watches. And not for any of the standout apps or ludicrously expensive straps, but because it has a “send your heartbeat” feature.

“Place two fingers on the screen until you see and feel your heartbeat. Lift to send,” says the website. It’s because when my husband Dion is in the pub, his boss and workmates are quite snooty about him texting me every hour or so to let me know he hasn’t died — but with this watch, he could just discreetly send a heartbeat. This must have been invented for people like me: smart people who’ve noticed that when people die, they don’t send out a bat signal.

“This heartbeat,” I ask one of the salespeople, “is it his actual heartbeat? Like, could I analyze it for irregularities or defects, if I was a doctor?” He looks at me like I’ve just asked him to sniff the inside of my cheek, and says “No,” as politely as he can muster. So, I pass on the watches for now, but at some point they’ll probably update that feature. Surely everyone will be asking the same question.

Death hangs over all of us like a watch-tapping chaperone. In Silicon Valley, they know this, and are pouring billions of dollars into ambitious life extension technology like Google’s Calico, or Peter Thiel’s biotech portfolio, though so far to little avail. It seems like the only thing that all the advances of the past few decades have done is to intensify our mortal terror by giving us hope that death will be optional soon — but maybe not quite soon enough, for some of us.

People hate it when you think they’re dead. Either they’re uncomfortable with the suggestion that they’re as perishable as a carrot, or they ask if you’re “alright” and suggest you “might want to see someone” — just for reacting logically to the simple fact that people die without letting you know.

Dion calls it stalking. It’s not stalking, it’s just seeing if they’ve posted on social media in the last few hours and, if not, sending a WhatsApp message to check if the “message received” or “seen message” icons light up. If it does, they’re probably alive and I’ll move on. Until tomorrow, obviously.

Because what if they were dead when I messaged but WhatsApp happened to be open on their phone, and there I am, assuming they’re alive, like an idiot? The logic is pretty simple: If they’re dead, they won’t charge their phone and by the next day, the battery will have run flat. So, I will text again and if the “received” icon doesn’t light up after the second message, it’s entirely possible they’re dead.

The truth is, the dead do send signals to let you know they’ve gone.

At that point, I’ll call. If it goes to voicemail, that doesn’t necessarily mean their phone was destroyed along with them in an accident or terrorist attack. I’ll message a few people to check if they’ve seen them in the last couple of days. If they haven’t, then tech’s job is done and real-life action must be taken: I will go to their house, and if they don’t answer, I’ll call the police to break the door down. Finding dead bodies must have been a nightmare when tech wasn’t around to do all the legwork; maybe you could investigate one or two people to check they haven’t died, but how on earth could you find time to do it for everyone you know?

I wasn’t always great at this. For example, when my husband emailed his dad and he didn’t reply. After a week, we were confused as we were pretty sure he didn’t usually take this long to respond. But did we think to go back over all our email exchanges, analyze how long he usually took, and cross-reference it? No. Did we think to Google the resting battery life of a barely-used iPhone 4 then text again to check if the “message received” icon appeared? We did not. Did we think to guess his incredibly obvious email password, then get into his inbox to see if emails were sitting unread, knowing his routine was to check them daily? That didn’t occur to us either. Not until we found him.

Both the police and the coroner thought he’d been dead for about a week. They couldn’t put an exact date on it — but using tech, I could. He kept a document of all his passwords on his iMac desktop. He hadn’t opened an email for eight days. I checked his e-calendar and made a couple of calls: he’d turned up to see his lawyer on the Monday, but he hadn’t returned his library books as planned on the Tuesday. Date of death confirmed. I wonder how much longer an autopsy takes?

The truth is, the dead do send signals to let you know they’ve gone. It takes a while to spot them because we’re rather more calibrated to the messages of the living. We notice texts and emails more readily than a week of silence, and we’re quicker to register a neighbor walking his dog than a front door that hasn’t been opened or a car that hasn’t been driven. Newspapers left uncollected on the doorstep shout a little louder, but still go unnoticed to most. I’m not going to wait until these quiet signs turn into the deafening howl of a bloated corpse ever again. I’m not going to miss another signal.

Working from home, digitally stalking my friends has become a full-time job. No news is good news, but no amount of no news seems to satisfy me. Someone must have passed out on their panic button. I spend entire mornings checking that my closest family and friends are alive, and instead of feeling relief, I remember another person I should check on, and then another. I move on to people I haven’t seen in a while. Then, people I haven’t seen in years. My concern spreads to people I barely know, and metastasizes to people I’ve never met — one afternoon, I fall into an internet hole researching the probable heart health of a reality TV star.

It starts innocently enough. Dion texts me from work, “Claude Littner’s going to replace Nick Hewer on The Apprentice!” He insists we watch the bloody Apprentice because he’s endlessly entertained by my “hate-watching.” Every week, I swear I will not heckle or furiously point out the various ways in which it’s designed to raise the blood pressure of anyone with an espresso-serving of sense. And every week, he ends up hollering with laughter. Suffice to say, I do not give one solitary donkey turd about Claude Littner replacing Nick Hewer on The Apprentice.

And yet, before I can think, my fingers have sprung to action and typed a reply, “That’s great! He will have had to do a medical, so even though he’s a bit overweight, he’s probably not about to drop dead.” Hmm. Is that true? I Google, “Does heart disease show up during a medical?” and wonder if I should instant message my friend Hannah as she’s a doctor now — but I haven’t seen her since college and it would be a weird thing to ask out of the blue. Maybe, if I just start a conversation and then casually… but Dion starts to type back. The little oval with the three dots appears, then disappears. My heart quickens. Why did he stop typing? I see flashes — a mugger, a bomb, a train crash — then his text comes through, “Hon, that’s a really weird response.”

“Whatever,” I think, plugging in my charger and pulling myself up to the screen. “I’m just thinking ahead. Unlike all of you idiots, content to be blindsided, the next time someone I know dies alone in their house, I’ll be ready.”

I open Spotify, and blast out some playlist that professes to be uplifting. I walk over to the window — it’s been a while since I went out there — and look down to the street. I shudder with disgust and horror, and scurry back to my computer. The screen is dark and in its reflection, I see myself. My unwashed, pajama-clad, housebound body hunched over a screen. I spend my days indoors, feverishly typing a breezy “Hi” (a breezy lie), only talking to the people I love to see if they’re still here. I’m not a friend; I’m a head-counter. A satellite botherer.

I take a few deep breaths, Google “how to get over agoraphobia,” then quickly switch tabs.

It’s there, on that last tab, waiting for me. All the information I need. And then I can Google more; people’s experiences and stories and tips, maybe a listicle on what the hell I’m supposed to do. I’ll read it. I’ll check on a few more people, then I’ll read it.

This article was originally published by Erica Buist on Medium. Erica is a writer and freelance journalist, currently traveling to death festivals and writing a book about it called This Party’s Dead.

Read next: [Best of 2019] Here’s how to save your elevator pitch from falling flat