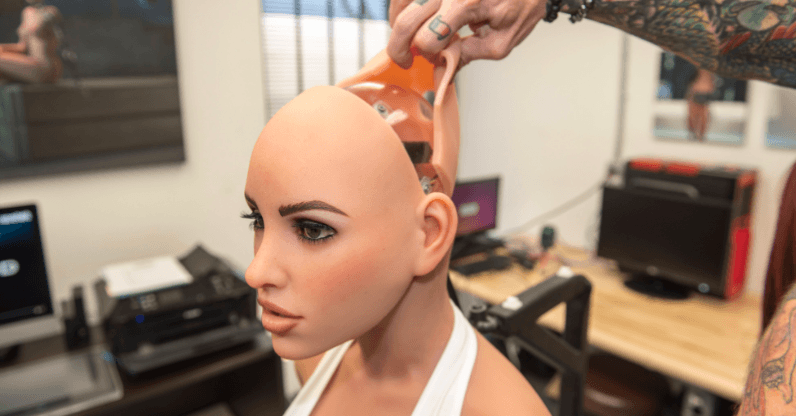 You might be seeing more and more headlines about sex robots at the moment, but the reality is that sex robot tech still has a long way to go. Technically ‘sexbots’ do not currently exist, or at least, certainly not in the way they’re frequently portrayed in the media.

The closest the adult sphere has gotten to the sexy robots of WestWorld, are really just “anatomically correct” sex dolls with very limited mobility, one of which can connect to an app for verbal communication, giving you the illusion of interacting with an artificially intelligent sex robot.

Inevitably, that won’t always be the case, but the ‘leaps and bounds’ of sex robot advances may well come from outside of the adult realm. New developments in robotics are constructing alternative ways for more mobile structures and intelligence, that perhaps look for more creative mechanics rather than replicating a life-size talking barbie doll that lack more humanoid capabilities. Sex robot engineers, take note.

A key part of the puzzle that hasn’t been resolved yet (at least not convincingly) is finding a way to integrate physical intelligence beyond crude gestures. However, Festo, a German robotics maker, has developed the ‘BionicSoftHand’, which is a pneumatic robot hand equipped with artificial intelligence, so it can learn how best to handle different objects and complete a number of gripping tasks.

While it’s obviously going to be useful as a helping third hand in factory assembly lines and also in service robotics, its dexterity could allow for safe sexual interactions.

Just think of the grip and squeeze capabilities that could aid arousal.

On March 8 2019, a Buddhist deity in the form of a genderless android (“Mindar” to you and me), will be accessible to the public. Built as a collaboration between the Zen Temple and Hiroshi Ishiguro, professor of intelligent robots at Osaka University, Mindar is made with aluminium and silicone, costs $909,090, and can move its eyes, head, arms, hands and torso.

Okay, so it can’t yet walk either, but at least it can make human-like gestures. And with a camera inserted into its left eye, it knows where to look and can appear to hold eye contact.

Its lack of perceived gender will allow visitors to react and interact with Mindar however they choose. Translating that idea to a sex robot could result in some interesting implications, that differ from responses to the typically feminized sexbot tropes.

Associate professor to Ishiguro, Kohei Ogawa, explains that, “everything depends on the person who is watching the robot. If someone wants to treat the android as a man, there will be some elements that represent a male form and vice versa.”

For the public reveal, the engineers have ambitions to enhance the android intellectually. Ogawa explains that although Mindar “can convey very complicated messages to visitors” the developments will offer more responsive interactions to questions and provide more personal consolation.

Mindar isn’t the first though. ‘Sophia’ (shown in the video above) became the world’s first robot with citizenship, we may come to expect more of these intellectually stimulating bots when it comes to the bedroom too.

The distinguishing factors between existing AI-in-built sex dolls and the potentials of Mindar are perhaps the more intimate connectivity.The ability for bots to become more thought provoking, intellectually stimulating and physically interactive, as opposed to the existing receptive, passive inanimate dolls, with a customizable ‘agreeable’, even predictable, personality to suit your every need.

The element of mystery and intellect that AI could attempt to replicate is what makes sex with robots that much more exciting.