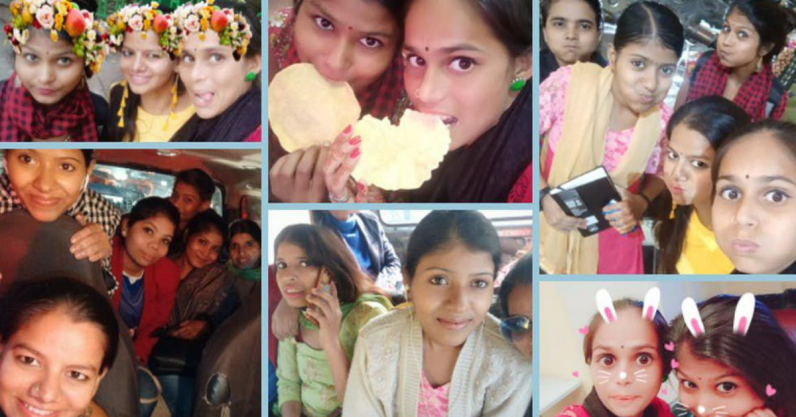 Taking selfies and posting them on social media is often derided as a narcissistic, self-absorbed, and attention-seeking practice. Filters come in for particular disdain due to the role they play in reinforcing unattainable beauty standards, by making faces lighter, slimmer, and wider-eyed than is natural.

Yet feminist, minority, and queer activists have argued selfies can be a way for people to represent and take pride in their identity, sexuality, and gender orientation. And recently, my own experiences researching gender, smart cities, and urban citizenship in India have led me to see the value of selfies in a new and surprising way.

As part of a recent research project, my team and I were interested in understanding the lives of young women living in slum resettlement colonies on the outskirts of Delhi’s sprawling metropolis. To that end, we created a WhatsApp group, and asked 11 women to send in diary entries of their daily experiences in the form of images, text, audio, or video as they travelled from their homes to the city over the course of six months.

Our participants turned out to be avid selfie takers. But there’s much more to this than a simple rendition of a millennial trend. Their selfies are digital, visual stories from the margins which capture their struggles and accomplishments as they step out from women’s traditional role in the home and navigate the largely male-dominated realm of the city.

Phones for fun and freedom

Getting a personal mobile phone is a significant event in the lives of these women. Families only permit the women to have their own phone after a series of difficult negotiations, as families are anxious the phones could lead to what families perceive as “transgressive” behavior, such as disobeying parents, breaking curfew, talking to men, or wearing Western clothes.

Our participants convinced their families that having a phone is essential for keeping safe and staying in touch, when they have to go into the city for “legitimate” reasons such as work or education.

Smart phones usually come at a price which their families cannot afford, so when women start working they often spend their first salary to get one of the cheaper Android devices and pay off the full cost in monthly installments. Data is affordable and connectivity can be instantaneous. Having a personal phone gives women the ability to leave the home and communicate with others away from the gaze of the family, so they see it as giving the gift of freedom.

Women celebrate this freedom using the phone’s front-facing camera. Of course, they take selfies for fun, using filters to transform their faces with amusing and outlandish templates.

WhatsApp me aana, facebook me jaana, yeh hai smart zamaana – translated as ‘coming on WhatsApp, going to Facebook, these are the smart times’. – WhatsApp diary entry, 2018.

But they also take selfies to record their visits to different places, celebrate their friendships and mark their coming of age as smart, connected young women, enjoying urban life – even when poor network connectivity means phones frequently crash and apps fail.

The city at arm’s length

Our participants didn’t really regard taking selfies as a political act. But when you consider how, when, and where they take selfies the images are a barometer of their social, economic, and political exclusion from the city.

They speak to the paradoxes experienced by women living in Delhi’s urban peripheries, as both technology – and the city itself – can be at once liberating and dangerous.

In some ways, the selfies show that being in the city is liberating for women, as they represent a new-found freedom outside the home and the constraints of traditional gender roles. Through these selfies, women curate the city at arm’s length, placing themselves in the centre of the frame as they stage their own arrival in many different public places.

But by recording women’s presence at a particular time and place, these selfies also give away what, when and where the women cannot be. For example, selfies are mostly taken during the day, or when they are with a group of friends, in places where there are fewer men, or in familiar neighborhoods where they feel comfortable and confident. Very rarely do these women take selfies when they travel alone, – because sexually predatory male attention remains a constant feature of their journeys.

Uploading selfies to Facebook also exposes these women to the dangers of online and offline stalking, harassment and bullying. A disturbing picture entry in the WhatsApp diary, captioned “my selfie in a bus full of men”, evoked the Nirbhaya case of 2012 – when a young woman was fatally gang raped on a bus – and suggested that the selfie is also a way for these women to witness and record danger in their everyday life.

Phones between the home and the city

Selfies inside the home are largely absent in the WhatsApp diary entries. Although home is valued by their families as private – and therefore safe for women, our participants often viewed it as a place of confinement.

Home is where the women’s daily struggles with poor infrastructure for drinking water, sanitation, waste collection and transport take place. More significantly, family control over women’s bodies – through strict curfew hours and restrictions on where they can go – highlight older and younger generations’ very different understandings of freedom and danger.

While older generations who grew up without mobile phones are mainly concerned about women’s physical safety, the young women in our research have to deal with daily invasions of privacy, sexual harassment and abuse both at home and in the city, online and in real life. Their selfies tell a story about what it’s like to navigate the journeys between home and the city, as the boundaries between public and private, freedom and danger become increasingly blurred in these “smart times”.

This article is republished from The Conversation by Ayona Datta, Reader in Urban Futures, King’s College London under a Creative Commons license. Read the original article.

Read next: We need robot driving schools for our autonomous cars