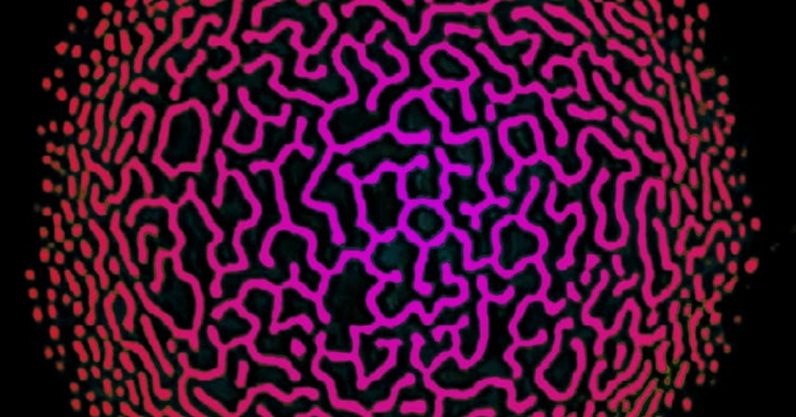 Explaining consciousness is one of the hardest problems in science and philosophy. Recent neuroscientific discoveries suggest that a solution could be within reach – but grasping it will mean rethinking some familiar ideas. Consciousness, I argue in a new paper, may be caused by the way the brain generates loops of energetic feedback, similar to the video feedback that “blossoms” when a video camera is pointed at its own output.

I first saw video feedback in the late 1980s and was instantly entranced. Someone plugged the signal from a clunky video camera into a TV and pointed the lens at the screen, creating a grainy spiralling tunnel. Then the camera was tilted slightly and the tunnel blossomed into a pulsating organic kaleidoscope.

Video feedback is a classic example of complex dynamical behaviour. It arises from the way energy circulating in the system interacts chaotically with the electronic components of the hardware.

As an artist and VJ in the 1990s, I would often see this hypnotic effect in galleries and clubs. But it was a memorable if unnerving experience during an LSD-induced trip that got me thinking. I hallucinated almost identical imagery, only intensely saturated with colour. It struck me then there might be a connection between these recurring patterns and the operation of the mind.

Fast forward 25 years and I’m a university professor still trying to understand how the mind works. Our knowledge of the relationship between the mind and brain has advanced hugely since the 1990s when a new wave of scientific research into consciousness took off. But a widely accepted scientific theory of consciousness remains elusive.

The two leading contenders – Stanislas Dehaene’s Global Neuronal Workspace Model and Giulio Tononi’s Integrated Information Theory – both claim that consciousness results from information processing in the brain, from neural computation of ones and zeros, or bits.

I doubt this claim for several reasons. First, there is little agreement among scientists about exactly what information is. Second, when scientists refer to information they are often actually talking about the way energetic activity is organised in physical systems. Third, brain imaging techniques such as fMRI, PET and EEG don’t detect information in the brain, but changes in energy distribution and consumption.

Brains, I argue, are not squishy digital computers – there is no information in a neuron. Brains are delicate organic instruments that turn energy from the world and the body into useful work that enables us to survive. Brains process energy, not information.

Recognising that brains are primarily energy processors is the first step to understanding how they support consciousness. The next is rethinking energy itself.

We are all familiar with energy but few of us worry about what it is. Even physicists tend not to. They treat it as an abstract value in equations describing physical processes, and that suffices. But when Aristotle coined the term energeia he was trying to grasp the actuality of the lived world, why things in nature work in the way they do (the word “energy” is rooted in the Greek for “work”). This actualised concept of energy is different from, though related to, the abstract concept of energy used in contemporary physics.

When we study what energy actually is, it turns out to be surprisingly simple: it’s a kind of difference. Kinetic energy is a difference due to change or motion, and potential energy is a difference due to position or tension. Much of the activity and variety in nature occurs because of these energetic differences and the related actions of forces and work. I call these actualised differences because they do actual work and cause real effects in the world, as distinct from abstract differences (like that between 1 and 0) which feature in mathematics and information theory. This conception of energy as actualised difference, I think, may be key to explaining consciousness.

The human brain consumes some 20% of the body’s total energy budget, despite accounting for only 2% of its mass. The brain is expensive to run. Most of the cost is incurred by neurons firing bursts of energetic difference in unthinkably complex patterns of synchrony and diversity across convoluted neural pathways.

What is special about the conscious brain, I propose, is that some of those pathways and energy flows are turned upon themselves, much like the signal from the camera in the case of video feedback. This causes a self-referential cascade of actualised differences to blossom with astronomical complexity, and it is this that we experience as consciousness. Video feedback, then, may be the nearest we have to visualising what conscious processing in the brain is like.

The suggestion that consciousness depends on complex neural energy feedback is supported by neuroscientific evidence.

Researchers recently discovered a way to accurately index the amount of consciousness someone has. They fired magnetic pulses through healthy, anaesthetised, and severely injured peoples’ brains. Then they measured the complexity of an EEG signal that monitored how the brains reacted. The complexity of the EEG signal predicted the level of consciousness in the person. And the more complex the signal the more conscious the person was.

The researchers attributed the level of consciousness to the amount of information processing going on in each brain. But what was actually being measured in this study was the organisation of the neural energy flow (EEG measures differences of electrical energy). Therefore, the complexity of the energy flow in the brain tells us about the level of consciousness a person has.

Also relevant is evidence from studies of anaesthesia. No-one knows exactly how anaesthetic agents annihilate consciousness. But recent theories suggest that compounds including propofol interfere with the brain’s ability to sustain complex feedback loops in certain brain areas. Without these feedback loops, the functional integration between different brain regions breaks down, and with it the coherence of conscious awareness.

What this, and other neuroscientific work I cite in the paper, suggests is that consciousness depends on a complex organisation of energy flow in the brain, and in particular on what the biologist Gerald Edelman called “reentrant” signals. These are recursive feedback loops of neural activity that bind distant brain regions into a coherent functioning whole.

Explaining consciousness in scientific terms, or in any terms, is a notoriously hard problem. Some have worried it’s so hard we shouldn’t even try. But while not denying the difficulty, the task is made a bit easier, I suggest, if we begin by recognising what brains actually do.

The primary function of the brain is to manage the complex flows of energy that we rely on to thrive and survive. Instead of looking inside the brain for some undiscovered property, or “magic sauce”, to explain our mental life, we may need to look afresh at what we already know is there.

Read next: The best phones of 2018 for every kind of buyer