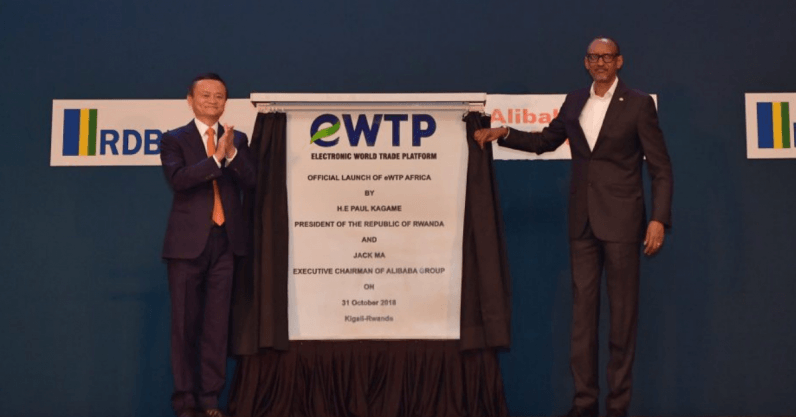 A new hub has been opened in Kigali, Rwanda which aims to assist the country’s small and medium-sized enterprises, as well as startups, to market and sell to Chinese consumers among many of its benefits.

This comes after Rwanda became the first Afrikan country to be admitted to the Electronic World Trade Platform (eWTP).

The eWTP is the brainchild of Alibaba Group founder and executive chairman, Jack Ma. In 2016 Ma proposed the concept of eWTP in the Boao Asian Forum for the first time. Ma explained:

I am delighted Rwanda is the first eWTP partner in Afrika, and I look forward to the development of an innovative digital economy here. Entrepreneurs in Rwanda, and elsewhere in Africa, are ready to seize the opportunities offered by the digital economy.

It is up to all of us to help them succeed. People ask me, ‘Why Rwanda? There are so many countries in Afrika,’ When I first came to Rwanda, I was shocked by its ability to embrace change. If every country was like Rwanda, think how powerful Africa could be. My answer is, ‘Why not Rwanda?

Since Ma’s first visit to Afrika in 2017, the e-commerce giant he founded has launched several initiatives across the continent to support digital startups.

During his first visit to Afrika which saw him go to Kenya and Rwanda, Ma announced he will be creating a $10 million African Young Entrepreneurs Fund.

This was followed by an Alibaba and UNCTAD partnership to annually train Afrika’s young e-commerce startups.

Added to that, in 2018 Ma announced the Netpreneurs Prize for Africa during his first visit to South Africa as well as e-commerce “train the trainer” programme in Rwanda.

“Rwandan producers will be able to sell directly to a much larger set of customers than before, while bypassing costly intermediaries. This improves productivity and profitability.

There really are no downsides to doing business on a global scale,” said President Paul Kagame on the launch of eWTP in Rwanda.

Startups in Rwanda will receive support in the form of operational infrastructure, such as commerce logistics, cloud computing, mobile payments and skills training as part of their participation in the eWTP hub in Kigali.

Many have criticized China’s general modus operandi for doing business in Afrika. In some cases, the Chinese government or Chinese organizations that come to Afrikan countries offering infrastructure development loans which have been said to come accompanied by severe terms and conditions should the country fail to make repayments.

However, in the case of Alibaba it’s refreshing to witness a Chinese organization committed not only in financial investments in Afrika, but training its youth and digital startups in preparation for the future.

Read next: This nifty free tool limits incoming email to 3 times per day