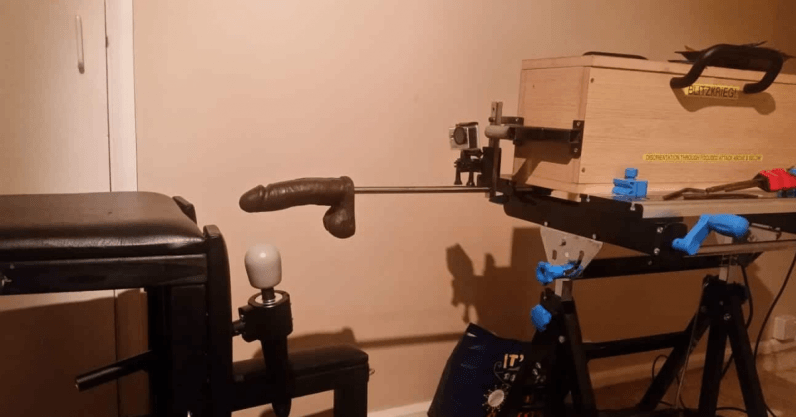 Think of companies like We-Vibe, Hot Octopuss, Electro-Stim, and more. However, this isn’t the whole story. Ever since the inception of the adult industry, individuals have been seeking cheap, efficient and, creative ways to build their very own “sex tech” at home.

Things have, of course, come a very long way since then. Now, it’s not uncommon to hear of creative kinksters making their own sex machines, electro-play devices, and more.

I spoke to a few people for whom creating their own sextech devices is either a passion, or a project born out of economic necessity – many of the devices on the market through mainstream sex shops are tremendously expensive. Even a basic sex machine, for example, can run to hundreds of pounds – and that’s before you’ve added in any body-safe attachments.

This man builds his own sex machines

Kevin [surname withheld] is an engineer by profession and building his own sex machines – which form the centerpieces to the lavish home parties he throws for his kinky friends – is both a hobby and a point of pride.

“I’ve built two machines. One is made from a simple, standard reciprocating saw. Instead of the usual saw blade, I used a vac-u-lock plug adapted to fit the saw. I made mine using a lathe, but you can buy them ready to go from various Etsy sellers,” he told SEXTECHGUIDE.

“The second machine,” he continued, “is a bit more complicated. The parts include a 12V drill motor, a chuck, a drive shaft, a transformer, a fly wheel, a drive arm, a piston, some linear bearings, a vac u lock plug, a form of speed control, a power adapter, and the skills to put all of this together.”

I should note here that these are not projects that just anyone should take on. Kevin is a highly skilled engineer with the training to use these items and the equipment to put them together safely. I cannot recommend that you try to build your own machines, unless you are sure that you have the skills and knowledge to do it safely.

Even then, please ensure everything is tested really robustly for safety and failure points before even thinking about using it on a human being.

Another person I spoke with, CS, told me that her partner – also an engineering professional – was considering something similar.

“We were looking at prices for fucking-machines and they were so, so expensive.  He [her partner] started looking up tutorials from the DIY community and realized he could make it much cheaper, and already had most of the pieces,” CS explained.

Bianca [surname withheld] spoke to me about a homemade sound-based electro-sex system she created for play with her long distance partner.

“It was a clumsy set-up,” she admitted, “but essentially, he had his electro kit set up such that if you played a sound into the speakers, the amplifier was connected to the electrodes, and they were connected to his genitals.

I used a voice conferencing program, with my mic muted but the sound waves he wanted playing through my mixer. I used the fader on my mixer to increase and decrease his current remotely while talking to him on Facetime.”

She adds that despite the makeshift nature of this system, it created an incredibly intense and powerful experience for them both. “It really got us interested in teledildonics, and we went out and bought a We-Vibe!”

US-based Gene and Olivia Allen have taken their homemade sextech a step further by launching it as a bonafide product via Indiegogo – it was successfully funded this month. Gene explains that “we have a great sex life, but my hand got tired doing the ‘come hither’ motion that you need for proper G-spot stimulation.”

I’m not going to give you advice on which projects you should and shouldn’t attempt at home. That’s beyond the scope of this piece, and it’s down to you to determine your own skill levels and what risks you feel comfortable taking with your body in the quest for the perfect homemade sex machine, electro-stim device or other toy of your kinky dreams.

Read next: 11 iconic movie / TV characters who should have been HODLing