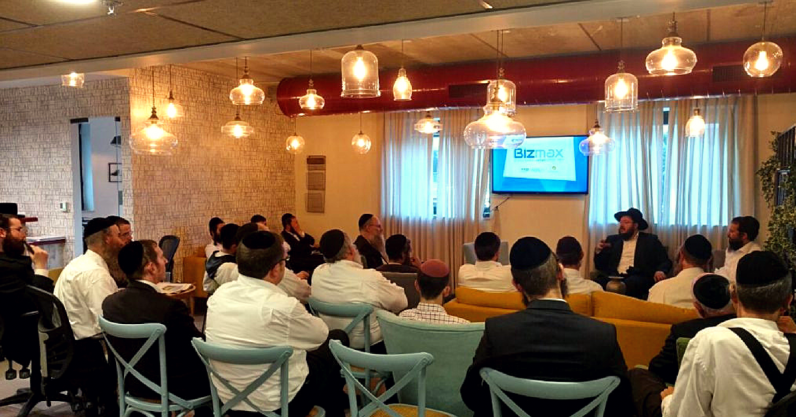 At first glance, it looks like any other shared workspace: the hip interior design, the abstract art, the ferns gracing the round cafe-style tables, the board with the latest news.

But this particular one has a whole library of Talmud books and a strictly kosher kitchen.

These are the workspace areas of companies like KamaTech in Bnei Brak and Bizmax in Jerusalem, which provide ultra-Orthodox Israelis in the high-tech industry with a physical space, mentorship, and collaboration to develop and support startups run by members of their community.

The model works like other Israeli workspaces (think WeWork) and accelerators but focuses on integrating ultra-orthodox entrepreneurs into the sector while accommodating ultra-Orthodox norms and needs, such as kashrut and prayer services, and in some cases, like Bizmax’s, the contentious issue of gender separation.

The concept of shared workspaces has taken off worldwide over the past decade, though more for economic reasons than integrating different communities into the workforce.

Shared workspaces may offer individual desks, offices, or conference rooms for rent on a month-to-month basis to provide clients with flexibility and affordability, while also having common spaces and kitchen areas where employees from the various tenant companies can interact.

New York-based WeWork is a pioneer in this field. Since its co-founding in 2010 by Israeli-American entrepreneur Adam Neumann, WeWork has exploded around the globe, with almost 200 locations around the world and a valuation of $20 billion.

WeWork is now helping KamaTech develop its role in the community as a place for ultra-Orthodox entrepreneurship.

Over the past several years, ultra-Orthodox Israelis have been increasingly entering the workforce.

Although the ultra-Orthodox community emphasizes devotion to Torah study, ultra-Orthodox employment stands at around 52 percent for men and 73 percent for women as of 2016, up from 36 percent and 51 percent, respectively, in 2003, according to an Israeli Democracy Institute (IDI) Report in 2017.

Some attribute this rise to changing government policies. Decreased government funding for Yeshiva studies and increased incentives to enter the workforce, such as tax breaks and training stipends, may be pointed to as the drivers of this change.

Last year, the Finance Ministry unveiled the “Net for the Family” initiative, giving benefits to families that make above 15,000 NIS a month.

However, there is also a sense of a growing desire for work within the ultra-Orthodox community.

Prolonged, widespread poverty (49 percent of ultra-Orthodox families are below the poverty line, according to the IDI’s Statistical Report on Ultra-Orthodox Society in Israel 2017), rapid population growth (6.9 children per ultra-Orthodox woman) and the decreasing sustainability of full-time Torah study serve as motivations for ultra-Orthodox Jews to seek viable ways to escape poverty and provide for large families.

One intriguing statistic – an increase in internet usage by ultra-Orthodox from 28 percent in 2008-2009 to 43 percent in 2015-2016, according to the IDI report – is indicative of a new trend: the ultra-Orthodox community’s interest in integrating further into Israeli society.

Israel’s high-tech sector is experiencing a shortage of engineers, programmers, and developers and the government is looking for ways to absorb more workers from diverse backgrounds, including those from the ultra-Orthodox and Arab communities.

Aside from the fact that the ultra-Orthodox population has an exemption from Israel’s military draft (many startup ideas and employees come from the service), ultra-Orthodox completion of Bagrut (matriculation) exams is at 13 percent for boys and 51 percent for girls, while those who go on to higher education tend to study education and medical professions rather than engineering and other sciences.

In Bnei Brak, a largely ultra-Orthodox city near Tel Aviv, KamaTech operates as both an accelerator and shared workspace for entrepreneurs from the community.

It was co-founded by Moshe Friedman, currently its CEO, Yossi Vardi, a veteran Israeli entrepreneur, and his wife Talma Vardi, and Zika Abzuk, a senior manager of business development at Cisco Israel.

Friedman tells NoCamels that the company is “working in three main areas: one is training, the second area is the placement of Haredim [ultra-Orthodox Jews] in big companies…like Google, Microsoft, Cisco, Facebook, Intel, etc,” while the third is “to help Haredim build their own startups” through mentorships and workshops.

Friedman says KamaTech can facilitate a path for members of the community to become coders, mobile developers, cybersecurity experts, and so on.

KamaTech hosts courses on a variety of topics in the field led by Google, Cisco, and other big players with which KamaTech has partnered, Friedman tells NoCamels. Since its founding in 2013, KamaTech’s enrollment of ultra-Orthodox entrepreneurs in its programs has increased from just five to 1,100.

Friedman says KamaTech brings in partners to work with up to 30 promising companies based at the accelerator. So far, these companies have collectively raised about $70 million, he says.

Earlier this year, KamaTech opened a new shared workspace called Ampersand for men and women, but with some optional separation. Friedman says the space offers an approach that gives mixed-gender staff flexibility.

“We called it Ampersand because it is about connecting people, connecting communities, connecting the Haredim to high-tech,” he says.

Ampersand features a kosher (lemehadrin) kitchen and has numerous glatt kosher restaurants in the vicinity. There is also a synagogue for prayer services and Friedman says KamaTech does “Haredi-style” happy hour on Thursdays (cholent included) as well as meals after fast days.

There are also English teachers on hand to help members (free of charge), as the community does not put an emphasis on teaching the language in its school systems.

As for WeWork, Friedman explains the workspace giant gives KamaTech free assistance. “When they [WeWork] heard that we were going to do something like this, they said, ‘We want to help you,’ and they are helping us a lot,” Friedman says WeWork is sending its experts to share extensive knowledge and know-how with KamaTech on how to build and manage a shared workspace.

Many companies are already using Ampersand’s services, Friedman says. Some are startups, but others are bigger companies, like Taboola, AT&T, and Moovit, which have branches in Ampersand to tap into talented members of the community.

KamaTech also has an interesting partnership with Cisco, which, besides providing courses for KamaTech’s accelerator, is helping to equip Ampersand with advanced communication technologies.

Friedman notes this is particularly important since ultra-Orthodox startups are less willing to physically leave their communities to make contact with startups in other areas.

KamaTech also has some important figures on its advisory board, including USB stick inventor Dov Moran, Wix founder and CEO Avishai Abrahami, Chemi Peres, son of the late president Shimon Peres and a founder of VC firm Pitango, and Adi Soffer-Teeni, CEO of Facebook Israel.

Bizmax, by contrast, is a shared workspace for men only, though there has been talk of opening a branch for women.

It launched last year as part of a collaboration between Achim Global, the Kemach Foundation, and the Jerusalem Development Authority.

Bizmax CEO Yitzik Crombie tells NoCamels that the company is home to about 100 businesses, and offers its space to companies from different sectors, not just high-tech. Although high-tech companies account for 47 percent of Bizmax clients, he says.

Later this year, Bizmax intends to launch a four-month accelerator program for entrepreneurs and an Amazon trading program, teaching interested members how to make an income from selling on the e-commerce platform.

Members of Bizmax include software developers, programmers, an event planner, an editor, a robotics entrepreneur, real estate tech developers, and startup founders, according to a promotional video for the company.

Most of those who appear in the clip speak favorably of the “Haredi environment,” the cooperation between members, and the sense of community.

Friedman believes that it is necessary to integrate ultra-Orthodox women into the high-tech industry, but appreciates Bizmax’s approach since some aspiring entrepreneurs may prefer that model.

He adds that he hopes to see many more shared workspaces for ultra-Orthodox Israelis offering further variation and accommodation for different preferences within the ultra-Orthodox community.

Both KamaTech and Bizmax have received symbolic encouragement from the government, but have yet to receive material support.

For his part, Friedman says the government has shown significant interest in KamaTech’s operations in a series of meetings and is confident that some funds may be forthcoming.

This article was originally published on NoCamels. you can read the original article here.

Read next: We DM’d a lot of strangers to ask why they use Drake lyrics on Instagram