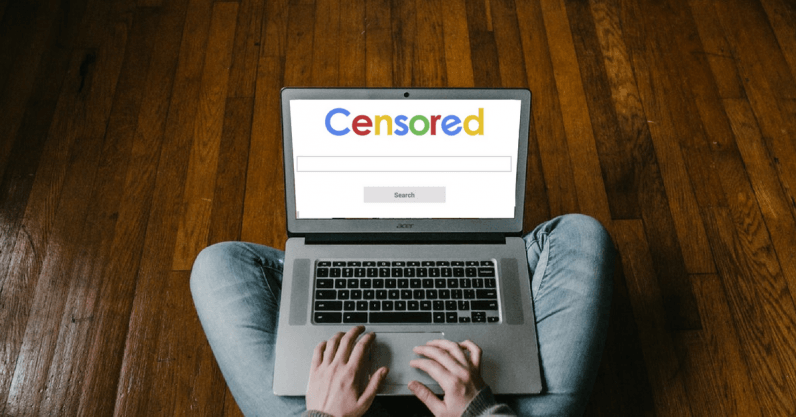 The Great Firewall of China is the largest-scale internet censorship operation in the world.

The Chinese state says the firewall is there to promote societal harmony within an increasing population of billions of people. It considers the internet in China as part of its sovereign territory.

Eight years ago, Google withdrew from China, pulling its search and other services out because of country’s limits to freedom of speech.

But it is now planning to relaunch a heavily censored version of its services in China, according to a whistleblower who spoke to online news website The Intercept.

This project, named Dragonfly, will encompass a new, heavily censored version of Google’s search services, including mobile apps, that will be run in partnership with a local company in China.

Censorship in China includes returning no results for searches that depict Chinese police or military brutality (such as the Tiananmen Square massacre), pro-democracy sites, sites linked with the Dalai Lama, and anything related to Taiwanese or Tibetan independence.

The whistleblower who spoke to The Intercept cited ethical concerns over this project – and rightly so. There are several ethical dilemmas with Google’s move back into China.

Should large Western companies such as Google give up ethical values to make money in China? Is it okay to design technology to assist the Chinese government in restricting the human rights of their citizens? Where does “respect for Chinese values” turn into “assistance in oppressing Chinese people through censorship”? Is Google being hypocritical by making money on the freedom of information available in most societies but then selling it out when they go into China?

The largest professional organization for computing, the Association of Computing Machinery, recently updated its code of ethics, which includes some specific provisions that we can use to think through these issues.

Many Google employees are members of the ACM, meaning they have agreed to abide by this code. Some of these employees may be working on Project Dragonfly, so they will need to evaluate their work in terms of the code.

First, the primary goal of technology development should be to benefit the public good, “to contribute to society and to human well-being”, “promoting human rights and protecting each individual’s right to autonomy” (principle 1.1).

Taking part in censorship at the Chinese state’s behest and censoring the topics mentioned above would appear to be inconsistent with this principle.

Individual freedom is heavily curtailed in China, and this is reflected in the censorship of the internet there. But, despite what the Chinese government argues, promoting social harmony doesn’t require the restriction of freedom or violation of human rights.

Second, there are specific provisions within the code against assisting in the oppression of a population within the code. “Computing professionals should take action to avoid creating systems or technologies that disenfranchise or oppress people” (principle 1.4).

In developing technology to censor sites related to democracy and Chinese-committed atrocities, Google employees would arguably be violating this as well.

But surely this is a case for respecting “local, regional, national, and international laws and regulations” (principle 2.3)? The code of ethics expects computing professionals to challenge unethical rules – and break them if a rule “has an inadequate moral basis or causes recognizable harm”.

It’s also one thing to respect local customs and laws, and another to actively implement them, as Google will be doing.

By collaborating, Google, as a large Western company, stands accused of giving credence to these oppressive laws. providing the Chinese state with political weight and propaganda for their policies.

It would be highly hypocritical of Google to take advantage of the values that have allowed it to grow to the behemoth it is today in much of the world – democracy, freedom of speech, personal autonomy == and then drop these when moving into the Chinese market.

Instead of being a values-driven company, it seems from this move that it is purely profit-driven.

So what should Google do? One way of responsibly dealing with this would be to open up project Dragonfly to input from the rest of the company, not just the hundred or so working directly on it. Let the Google employee base and other non-shareholder stakeholders decide where the red lines for Google’s values should be.

Research has indicated that ethical companies are more profitable, retaining employees who are proud to work for the company, and earning respect and loyalty from the public.

Standing up and showing China the value of democratic participation in company value identification will likely earn Google more respect both home and abroad.

Read next: The Pax 3 is a slick, stylish weed vape for blazing beginners