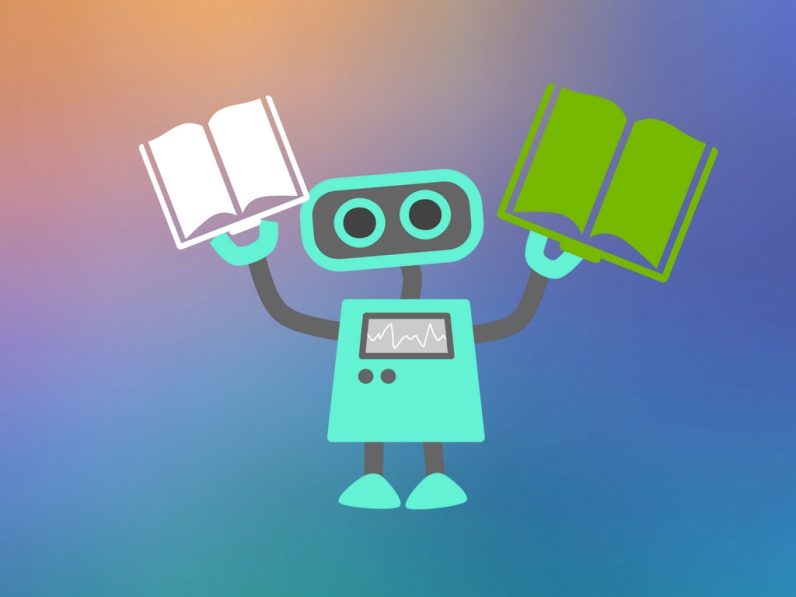 Sharing emotion-driven narratives that resonate with other people is something humans are quite good at. We’ve been sitting around campfires telling stories for tens of thousands of years, and we still do it. One reason why is because it’s an effective way to communicate: We remember stories.

But what makes for good storytelling?

Mark Magellan, a writer and designer at IDEO U, puts it this way: “To tell a story that someone will remember, it helps to understand his or her needs. The art of storytelling requires creativity, critical-thinking skills, self-awareness, and empathy.”

All those traits are fundamentally human, but as artificial intelligence (AI) becomes more commonplace, even experts whose jobs depend on them possessing those traits — people like Magellan — foresee it playing a bigger role in what they do.

“To tell a story that someone will remember, it helps to understand his or her needs. The art of storytelling requires creativity, critical-thinking skills, self-awareness, and empathy.” — Mark Magellan, IDEO U

Using AI to read a crowd

Connecting with an audience has always been something of an art form — it’s part of the magic of a great storyteller. But AI is steadily converting it into a science.

The AI-driven marketing platform Influential uses IBM’s Watson to connect brands with audiences. It finds social media influencers who can help spread a brand’s message to target demographics in a way that feels authentic and, well, human.

Ryan Detert, Influential’s CEO and co-founder, says that the tool uses two of Watson’s services, Personality Insights and AlchemyLanguage, to look at the content written by an influencer, analyzing that text, and scoring it across 52 personality traits — like “adventurousness,” “achievement striving,” and “openness to change.”

To date, says Detert, Influential has gathered these insights on 10,000 social media influencers with over four billion followers altogether.

Once a brand comes to Influential with their marketing goals, the platform uses Watson to identify the traits most strongly expressed by that brand, then matches influencers whose personalities, social media posts, and followers best reflect it.

If a brand narrative wants to project adventurousness, Influential will find influencers who score highly on that characteristic and whose followers respond well to it.

Influential worked with Kia on a 2016 Super Bowl ad featuring Christopher Walken, and Detert notes, “We saw a 30% higher level of engagement on FTC posts, which are branded posts [flagged] with [a hashtag like] #Ad or #Sponsored. The more the brand and influencers’ voices are aligned,” he says, “the greater the engagement, sentiment, ad recall, virality, and clicks.”

Influential also uses Watson’s AI to analyze social buzz and tell brands how they’re being perceived. Sometimes, says Detert, that means telling brands, “You’re not the brand you think you are,” and going back to the drawing board to come up with a better story.

The AI-driven marketing platform Influential uses IBM’s Watson to connect brands with audiences. It finds social media influencers who can help spread a brand’s message to target demographics in a way that feels authentic and, well, human.

Seeing, describing, and beyond

Somatic is a digital marketing company whose experiments with machine learning show the technology’s potential in visually driven storytelling, too. One of its tools, called “Creative Storyteller,“ uses AI to scan photos and generate short text descriptions of what it sees — but not in generic prose.

The tool, says Somatic founder and CEO Jason Toy, can write about visual data in different styles or genres, even mimicking the prose styles of celebrities. As long as there’s enough written content out there for Creative Storyteller to be trained on, Toy says it can do a pretty good impression.

Creative Storyteller has been used with major companies to turn an ordinary marketing campaign into an interactive one. In one case, says Toy, “We built an interactive ad where a user uploads a picture and a model talks to them in a style of someone else about that pic.”

Such short-form stories work well, but longer text often fails because the AI lacks context, notes Toy. “These machines are able to learn the information you give them. It seems magical at first, but then cracks appear with longer text.”

Google AI researcher Margaret Mitchell’s work may eventually fill cracks like those. She hopes her research, which is geared toward “helping AI start to understand things about everyday human life,” can start to push machines beyond just generating “literal content, like you get in image captioning,” toward anticipating how those descriptions will make people feel.

Says Mitchell, “There is increasing interest in developing humanistic AI that can understand human behaviors and relations.”

“There is increasing interest in developing humanistic AI that can understand human behaviors and relations.” — Margaret Mitchell, Google

Now for the inevitable question: Will this “humanistic AI” ever beat humans at their own game?

Suzanne Howard, a partner at Ideo and founder of Ideo U, believes collaboration between human storytellers and machines is more likely in the near term. Some of the questions she’s considering include, “How might the world’s storytellers leverage knowledge and insights via AI to make their stories even more powerful, faster? Might AI be a prototyping tool?”

Magellan, Howard’s colleague at Ideo U, believes the answer is yes; AI as already shown its ability to “explore unmet or latent needs” in an audience that a human storyteller might miss. That could prove helpful for planning and refining a story.

“It’s not hard to imagine AI crowdsourcing story plots from the internet and identifying people’s needs from social media,” he muses.

Jason Toy also sees collaboration with AI as the model to strive toward. “I see them as systems that work with humans. They’ll always need the human as high-level architect. Storytellers need to think about how the story will be felt, told, and the medium.”

“How might the world’s storytellers leverage knowledge and insights via AI to make their stories even more powerful, faster? Might AI be a prototyping tool?” — Suzanne Howard, IDEO

“It’s all about practicing empathy,” stresses Magellan. And for all the strides in AI research that he’s seen, empathy just doesn’t appear to be a skill machines will pick up too soon. “There’s a level of emotional intelligence you must possess as a storyteller,” he says. “Until robots gain that, we’ve got a leg up on them!”

In fact, storytelling may be one way to future-proof your job. Spend some more time around the campfire, but don’t be afraid if a robot turns up to help.

Read next: 10 logo design trends that will dominate 2018