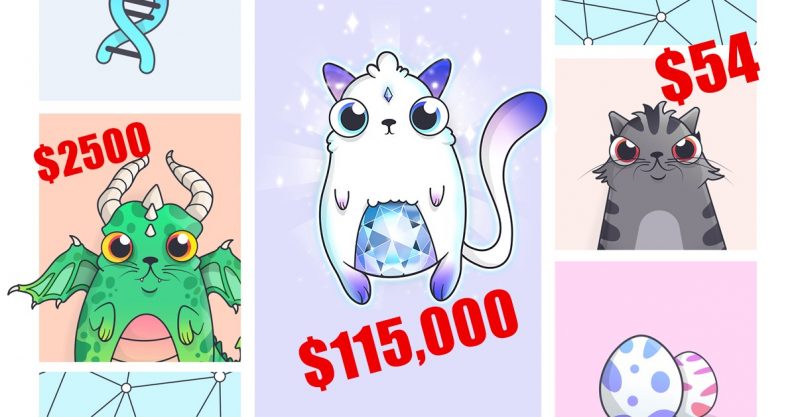 Then, as with every cat thing on the Internet, it promptly blew up. So far, people spent over $6.4 million on these virtual cats. The most expensive one, the genesis cat, sold for a whopping $115,000 a few days ago.

The popularity of Crypto Kitties caused a lot of anger and confusion online. Granted, at first glance, this looks completely silly. But, believe it or not, Crypto Kitties marks the beginning of a massive digital revolution. To understand why, we first need to learn about the blockchain, Bitcoin and Ethereum.

One of the most important properties of computers is that they can effortlessly duplicate information.

For instance, if I send you an email, I still have a copy of it on my computer. Compare this to the real world, where, if I send you a letter through the mail, the letter is gone. I no longer have it. There can only ever be one version of that letter in the world.

In most cases, this copy-paste property is great. But in some cases, it sucks. Money is a good example of that.

Say I create my own digital money —call it DCash — and give some to my friend. Then, my friend duplicates it a million times, and now, he wants to buy your car with it. Would you agree to sell him your car for a million DCash?

No. You’d say that his money isn’t worth anything because he can just make it all up from nothing.

This is the paradox of digital assets, or as I call it, the copy-paste problem: for things to have value, they need to be scarce. But computers, by default, make everything available to everyone. Therefore, anything that can be duplicated on a computer shouldn’t have any value, theoretically speaking.

This is a big problem for digital assets such as money. So far, we avoided this problem by backing the dollar through powerful third parties: governments, banks, Paypal, etc. Today, your online savings have value because you trust that your bank isn’t secretly duplicating your money (except they do).

So, what if we didn’t have to use third parties?

Enter Bitcoin and the blockchain

You probably heard of Bitcoin. This new digital currency went from $900 per coin at the beginning of 2017 to an eye-popping $14,500 today.

Bitcoin is special because it isn’t backed by any bank, government, or company. So, why is Bitcoin so valuable then?

The answer is the blockchain.

The blockchain is a recent invention powered by breakthroughs in cryptography. I won’t dive into technical details, but the gist of it is: the blockchain is a form of computing where you can’t duplicate things.

For example, if I send you an email over the blockchain, that email is gone from my computer. I will never get it back (unless you send it back to me). Just like the real-world letter from earlier, each Bitcoin is completely unique.

In the blockchain’s world, computer code is law, and the Bitcoin code stipulates that there will only ever be 21 million Bitcoin created. Currently, there is less than 1 Bitcoin available for every 460 people on the planet, and that is excluding the Bitcoins that have been lost forever. Bitcoins are unique and extremely scarce, and this is why they are so valuable.

Bitcoin is the most popular use case of the blockchain right now, but it is far from being the only one. The second most popular one, Ethereum, is far more interesting in my opinion.

You see, while Bitcoin can only add and subtract value on its blockchain, Ethereum is Turing complete, which means it can perform any computation.

In short, Bitcoin is to an old calculator what Ethereum is to a computer.

Because Ethereum can run computer code, it’s possible to build many different types of applications on top of it. Right now, Crypto Kitties just happens to be the most popular example of that.

As I said, Crypto Kitties is a game built on the Ethereum blockchain. This means that, in the game, every cat you buy or breed is unique and belongs only to you.

How is this different from other games, you might ask?

Well, when you play a traditional game like World of Warcraft, the company who made it controls everything. They have full access your characters and items. At any point, they can duplicate, ban or even delete them if they want to. In a blockchain-based game like Crypto Kitties, you own your assets.

This might not seem like a big deal at first, but people care about this. A lot.

This is my “Peter Thiel” type of unconventional truth: the fact that you own the cat just feels right. It’s a small nuance, but ultimately, it makes all the difference in the world. This is how real-world assets work, and this is how digital assets were always meant to work.

Would I pay that much money for a digital cat? No, but neither would I for a baseball card. In the end, however, these are all unique tangible assets that are extremely rare, and thus, are extremely valuable to some people.

I’ll admit it, collecting digital cats is silly, but that’s beside the point. Let’s stop for a moment and imagine that, instead of selling cats, this website sold:

Do you see the potential? What makes Crypto Kitties exciting isn’t the cats themselves, its the possibilities that it demonstrates. This is a proof of concept for something much bigger. With the Ethereum protocol, we can now create, tokenize, and freely trade any type of assets on the blockchain. This isn’t about cats; it’s about the future of this new, revolutionary technology.

I would invite you to try it. Then, imagine a world where every digital and physical asset is being freely traded just like those cats.

A lot of people  —  including me  —  believe the blockchain is the most important invention since the Internet.

The blockchain changes everything we thought we knew about computers. By removing one of the computer’s biggest features  —  the ability to duplicate information  —  it opens up computing to a multitude of new, real-world use-cases that would have never been possible before.

Granted, breeding digital cats is silly, and it will likely be a temporary fad. However, this marks the beginning of a digital revolution. The blockchain bridges the digital and the physical worlds in a massive way. Now, digital assets can have real-world properties such as scarcity, and physical assets can be traded just as easily as sending an email. This is the best of both worlds.

Given Crypto Kitties’ massive success, I predict we’ll see a lot of similar projects coming out in 2018 that will push the idea even further. Hell, I’ll even bet a Bitcoin that we’ll see Pokemon on the blockchain within the next 3 years.