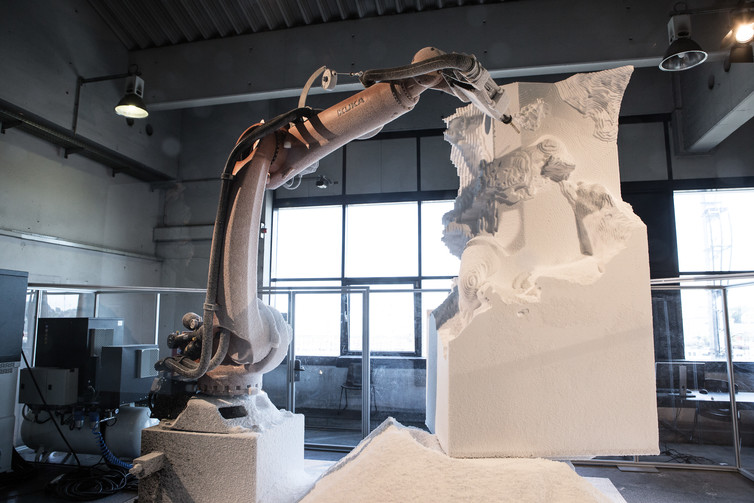 Two weeks ago, in an industrial shed in the northern suburbs of Brisbane, a team of engineers installed a large, orange robot arm. It was a standard industrial robot arm, but it was not going to be used for standard purposes. The robot’s job would be to carve moulds for the casting of large-scale, metal sculptures. It is being installed by Urban Art Projects, a company that specialises in the manufacture of sculpture and custom architectural facades.

Sculpture might not be the first thing that springs to mind if someone mentions robotics. We hear again and again that robots are set to change the way we drive our cars, grow our food, and perform surgery. But robots are changing art too.

There is, in fact, an extremely long history of robots being used in the arts. The creation of automata, mechanical devices driven by cogs, goes back centuries. These “robots” found their greatest expression in the incredible feats of mechanised Karakuri puppets in Japan and the clockwork automata of Europe in the 17th and 18th centuries.

The arts actually invented the name “robot”. The first use of the word recorded anywhere in the world was from a 1920 Czech play that featured humanoid style automatons, played by human actors.

In the mid-20th century, “cybernetic artists” began to work with electronic robots. Often these were produced as art objects themselves, similar to the older tradition of automatons. The polish artist Edward Ihnatowicz created The Senster, an electromechanical sculpture that could move and respond to people around it in a surprisingly lifelike manner.

Cybernetic sculptor Edward Ihnatowicz built the Senster – a 15 ft long, hydraulic robot – for Philips. It was on permanent display at the Evoluon, in Eindhoven in 1970.

Fast forwarding to our present moment, the Italian artist Quayola last year exhibited a reproduction of an ancient Greek sculpture, Laocoon and his Sons, which had been carved from polystyrene by a robot. The robot was deliberately instructed to leave the sculpture unfinished.

Artists have already done a lot with robots, but it’s safe to say that there’s more to come. Robots could have a big impact on the way artists work, especially by helping them produce sculptural art. Rather than being art, these robots are more of a tool for the artist.

In architecture, robots are already used for 3D printing houses, laying bricks, and cutting, shaping and moulding all manner of forms. But why use robots to make sculpture?

Art (especially sculpture) can be dangerous and expensive to produce. It is essentially a manufacturing process that relies on the input of many highly skilled artisans and fabricators to cast metals, weld, grind, polish and patina a final piece. If robots can help even with part of this process and still maintain the handmade quality, then that artwork could be produced at a more affordable price.

Robots could be used to quickly rough out a sculptural form that is then refined by the human artist. Or a human artist could do the bulk of the work and then leave it to the robot to finish the fine surface detail. This process could include programming of robots to leave the “mark” of the artist.

Robots will also allow artists to work at a physical scale much larger than their own bodies. Often, large public artworks are first produced as small scale models, or digital files that need to be translated into much larger finished works. By allowing artists to work at scale, robots will allow a smoother transition from working out preliminary ideas on miniature models through to finished works while maintaining the integrity of the artists’ input.

There are also possibilities to support artists working together across great distances. Robots, connected via the internet, could provide a way to do “sculptural conference calls” and allow collaborations between artists who would not otherwise get a chance to work together. This could be extended to aid the process of learning practical sculpting skills. The robot could provide a way to guide the untrained hand of novice users based on the expertise of a master artist.

Makerspaces, shared spaces for creating art, could also benefit from having robots smart and capable enough to create art. This way, members of the public could get easier access to these technologies and use them to realise their own artistic creations.

Robots as we know them still have a long way to go before artists will really be able to make widespread use of them and before a robot can produce something on its own that comes close to the quality of a human handmade object.

Fortunately, recent developments suggest robots are about to become much more adaptable and useful. In surgery, robotic assistants are now being routinely used by surgeons to carry out procedures that would not be possible or are extremely difficult to perform by hand.

Industrial robots can move with great accuracy, but they rely on pre-programmed movement paths. They usually can’t see what they are working on or adjust their movements in real time in the way that a human sculptor would. This lack of awareness makes robots dangerous to work around. Robots typically require highly controlled environments with expensive safety systems – not the kinds of environments you would find in most artists’ studios or busy makerspaces.

However research into collaborative robotics is set to make robots safe enough that people could even dance with them. Artists will need much more natural and intuitive ways of interacting and controlling the robot than we currently have available.

No matter what kind of robots we end up developing, one thing is certain. Artists have always employed new technologies in creative ways, to give us new kinds of art and to ask new questions about ourselves. That’s reason enough to continue to explore the intersections of robotics and art.

Related: Should robot artists be given copyright protection?

Read next: SoundCloud is worth saving.