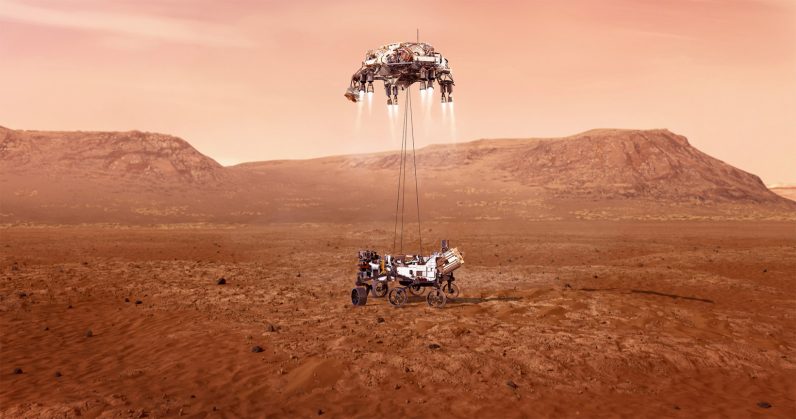 NASA’s Perseverance rover successfully touched down on Mars this morning, and has already begun beaming back images.

But people might be surprised to learn there have been another 48 missions to the red planet so far. Of these, more than half failed at stages from take-off to deployment — including the 1999 Mars Climate Orbiter, destroyed on Mars entry after someone failed to convert imperial measurements to metric.

Successful missions include Mars Insight, which is studying the interior via measurement of “marsquakes”, and the Curiosity rover, which touched down in 2012 and has been examining the geology of Mt Sharp.

Although there have been no return missions, there is a lot we can learn without travelling to Mars — from the more than 260 Martian meteorites that have fallen on Earth.

Read more: As new probes reach Mars, here’s what we know so far from trips to the red planet

Images taken by orbiters reveal Mars has more than 40,000 craters, each formed by an asteroid colliding with the surface. You can explore these craters yourself by going to Google Earth, toggling the Google Mars mode and zooming in.

If some of the debris from the large impacts reached escape velocity (about 5 km/s on Mars), it would be able to leave the planet’s gravitational field. Eventually, some of the ejected Martian material has intercepted Earth’s trajectory, flashing through the atmosphere until it either burned up or came to rest on the surface.

Although Martian meteorites have been found across Earth, most have been collected from Antarctica or the deserts of northwest Africa. In both cases, the black crust that forms as the meteorite partially burns up passing through Earth’s atmosphere stands out clearly against ice or sand.

This mode of interplanetary travel is important because it raises the possibility that life could inadvertently travel from one planet to another. Back in 1996, one Martian meteorite, ALH84001, was controversially thought to contain fossilized bacteria.

Some of the older landers have almost certainly taken Earth bacteria to Mars, since they were not purified before launch.

A bubble of Martian atmosphere

Small planets cool quickly and it has long been suspected that Mars’s core has largely but not totally crystallized. This means Mars has mostly lost the protective magnetic field that deflects cosmic radiation.

But we are confident Mars once had an ocean, containing water as we know it. The temperature was above freezing and conditions were suitable for life. The stripping away of the magnetic field early in Mars’s history means this ocean is long gone and the average temperature is now -65℃, but frosts, clouds and ice caps remain.

Not being fortunate enough to roam the deserts of Africa or the icy plateaus of Antarctica, I instead found my first Martian meteorite sitting in a cabinet in a gem store in the small New Zealand town of Akaroa.

Using a scanning electron microscope, my examination revealed it was a shergottite, one of the most common Martian meteorites — equivalent to what we know on Earth as basalt. If it’s basalt, though, how do we know it’s from Mars?

There are several ways of recognizing a Martian meteorite. One is from its gas content. When a meteorite strikes the surface of Mars, the “target” rocks are subject to such great pressures they partly melt and trap Martian atmosphere within gas bubbles. Some of these rocks are then ejected from the planet — becoming meteorites themselves.

The gases in these meteorites can be measured back on Earth and compared to the known Martian atmosphere, which comprises 95% carbon dioxide and distinct noble gas concentrations.

The thousands of craters scarring Mars’s surface mean it is ancient. This was confirmed when one meteorite was dated to be 4.4 billion years old. Properties of some other Martian meteorites show Mars formed within 13 million years of the formation of the Solar System. This in turn means some of the first planetary crust that formed on Mars likely still exists at the surface.

Old and cold — but not dead

This inference, along with some meteorite mineral and isotopic properties, implies Mars has not been shaped by plate tectonics — the global process that formed the continents, mountain ranges and ocean basins on Earth.

And, as most dated Martian meteorites are less than 1.5 billion years old, volcanism has continued throughout its history. Mars may be cold but it is not dead.

Martian meteorites also hold clues about how people may one day be able to survive on the planet.

While living in hollowed out lava tubes in Martian basalt may appeal to some hopeful interplanetary settlers, we’ll ultimately need to build shelters to protect us from the cosmic radiation and vast dust storms that engulf the planet.

Martian meteorites show olivine, a magnesium-silicate mineral, is common. Experiments are underway to assess the use of a breakdown component, magnesium carbonate, to form a concrete binder from which we could fashion buildings.

Martian meteorites show that big insights can be gleaned from little rocks and reveal what Mars is made of.

This article by James Scott, Associate Professor in Geology, University of Otago, is republished from The Conversation under a Creative Commons license. Read the original article.

Read next: 3 things I look for in a pitch deck as an investor