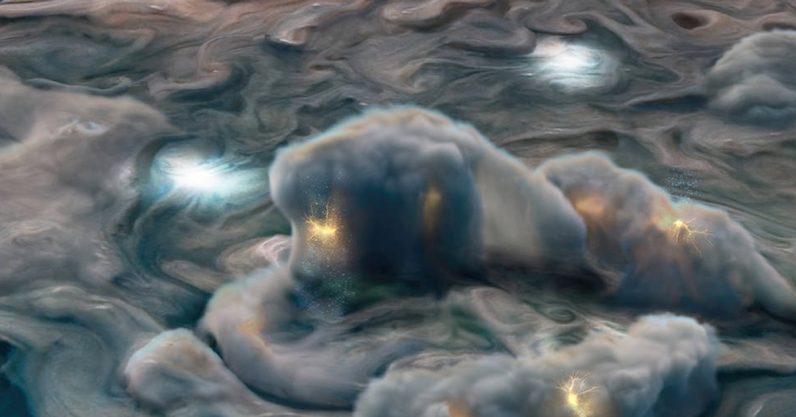 Shallow lightning is seen by the Juno spacecraft emanating from clouds rich in ammonia.

Large quantities of ammonia normally found in the atmosphere of Jupiter can be captured within these mushballs and fall into the depths of the massive world.

Juno on the storm…

Prior to the arrival of the Juno spacecraft at Jupiter, astronomers had noted lower-than-expected levels of ammonia in the upper atmosphere of the giant world. Following the arrival of Juno at Jupiter in July 2016, astronomers found higher concentrations of ammonia near the center of the planet than was seen closer to the poles. These findings remained a mystery — until now.

“While most latitudes exhibit a low abundance, the Equatorial Zone of Jupiter has an abundance of ammonia that is high and nearly uniform with depth. In parallel, the Equatorial Zone is peculiar for its absence of lightning, which is otherwise prevalent most everywhere else on the planet,” investigators report in the Journal of Geophysical Research: Planets.

Flashes of lightning were first seen on Jupiter, by the Voyager spacecraft in 1979. On Earth, thunderstorms form in regions where water exists in all three common states of matter — solid, liquid, and gas.

On Jupiter, as on our own planet, water moves through the atmosphere. Roughly 50 kilometers (just over 30 miles) beneath the visible surface of Jupiter’s cloud tops, where temperatures hover around zero Celsius (32 Fahrenheit) storms take shape. When they grow powerful enough, crystals of water ice are lifted high into the atmosphere.

Once there, the water crystals interact with ammonia, which acts as antifreeze, melting the ice. This process forms thick, ammonia-rich mushballs that fall deep into the Jovian atmosphere. As they warm deeper in the atmosphere, they melt, releasing ammonia and water, trapping the materials beneath the cloud tops of Jupiter.

“At these altitudes, the ammonia acts like an antifreeze, lowering the melting point of water ice and allowing the formation of a cloud with ammonia-water liquid. In this new state, falling droplets of ammonia-water liquid can collide with the upgoing water-ice crystals and electrify the clouds. This was a big surprise, as ammonia-water clouds do not exist on Earth,” Heidi Becker, Juno’s Radiation Monitoring Investigation lead at NASA’s Jet Propulsion Laboratory, explains.

This process dries out the atmosphere of Jupiter, resulting in relatively low levels of ammonia in the upper cloud layers of Jupiter.

“[A]mmonia vapor can dissolve into water ice to form a low‐temperature liquid phase containing about one‐third ammonia and two‐third water. We estimate that, following the process creating hailstorms on Earth, this liquid phase enhances the growth of hail‐like particles that we call mushballs,” researchers describe in the Journal of Geophysical Research.

“Jupiter from on high smiles at the perjuries of lovers.”— Ovid

Juno also found lightning occurring much higher in the atmosphere than ever before witnessed. These electrical discharges thought to rely on water to happen, provide further evidence for the idea that mushballs are responsible for removing much of the ammonia from the upper cloud tops of Jupiter.

“Here we report optical observations of lightning flashes by the Juno spacecraft with energies of approximately 105–108 joules, flash durations as short as 5.4 milliseconds and inter-flash separations of tens of milliseconds, with typical terrestrial energies,” researchers wrote in an article published in the journal Nature.

Launched nine years ago — August 5, 2020 — the Juno spacecraft may have answered one of the great mysteries surrounding the largest planet in our solar system.

“Combining these two results was critical to solving the mystery of Jupiter’s missing ammonia. As it turned out, the ammonia isn’t actually missing; it is just transported down while in disguise, having cloaked itself by mixing with water. The solution is very simple and elegant with this theory: When the water and ammonia are in a liquid state, they are invisible to us until they reach a depth where they evaporate — and that is quite deep,” explains Scott Bolton, Juno’s principal investigator at the Southwest Research Institute.

In July 2021, NASA plans to de-orbit the spacecraft, sending it plummeting into the atmosphere of Jupiter, preventing any potential contamination from a future crash of the vehicle into one of the Jovian moons.

Astronomers believe this recent finding will help researchers better understand the nature of the Jovian atmosphere, as well as giant worlds orbiting other stars. By learning how powerful storms happen on Jupiter, astronomers hope to learn about planets orbiting distant stars.

Read next: These hidden gems might change how you work with Adobe Creative Cloud forever