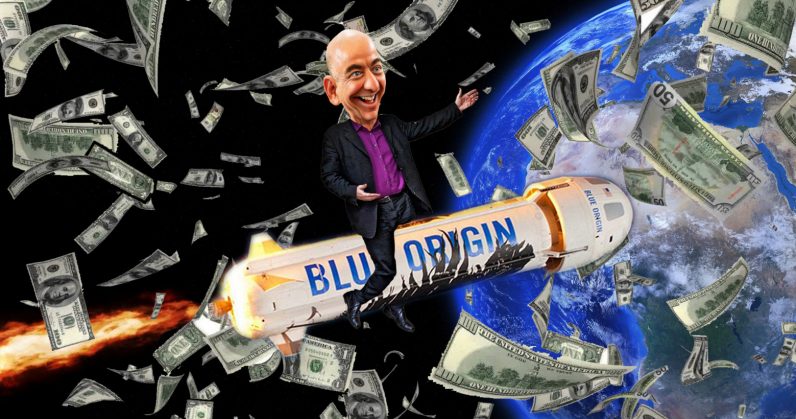 Jeff Bezos really wants to make space tourism a thing. According to a report by Reuters, the Amazon CEO’s rocket company, Blue Origin, could begin shuttling humans into space as early as next year.

For the price of a decent house in most areas of the country, Bezos plans to propel wealthy adventurers more than 100 km (62 miles) into suborbital space in Blue Origin’s ‘New Shepard’ autonomous rocket. Once in space, travelers will experience a few minutes of weightlessness, as well as the curvature of Earth — take that, flat-Earthers — before bing shoved into a pressurized capsule with six observation windows and returned to their home planet.

While $300,000 certainly isn’t chump change, sources familiar with the matter told Reuters that with six passengers aboard, and a per trip cost approaching $10 million, even the $300,000 tickets would leave Amazon millions of dollars in the hole for each trip.

The first passengers, according to Reuters’ sources, are likely to be Blue Origin’s own employees.

But before the company can launch anyone into space, it still has some work to do. Bezos‘ crew has currently completed eight flights of its vertical take-off and landing rocket, although hasn’t attempted it with passengers aboard — save a dummy, named “Mannequin Skywalker.”

There’s also some safety issues to figure out. We’ll know more about them once Blue Origin tests its capsule escape system, which is said to propel people away from the booster in the event of an explosion.

Bezos‘ plans aren’t the only show in town, either. Both Elon Musk and Richard Branson — through SpaceX and Virgin Galactic, respectively — have expressed interest, and run tests of their own, with the goal of getting tourists into space.

Read next: Samsung Galaxy S10 will reportedly come in 3 sizes to trump the iPhone in 2019