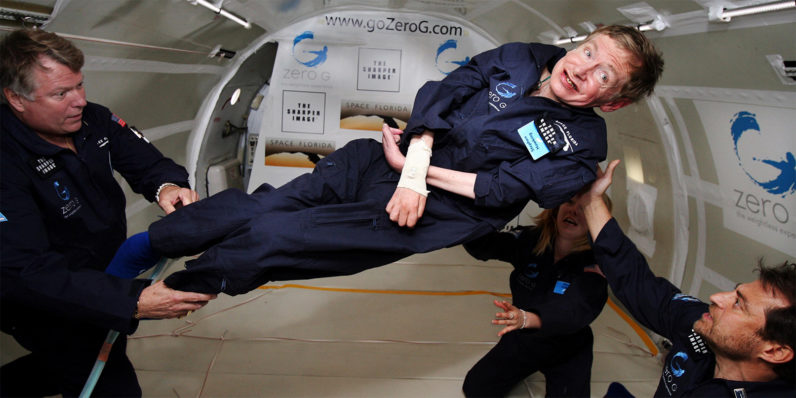 Professor Stephen Hawking, one of the most celebrated minds in science who’s known for his work in unlocking the mysteries of gravity, will soon see his biggest dream become reality as he’s set to venture into outer space soon.

In an interview with Piers Morgan on ITV’s Good Morning Britain, Hawking said:

My ultimate ambition is to fly into space. I thought no one would take me, but Richard Branson has offered me a seat on Virgin Galactic, and I said yes immediately.

Although it’d be a monumental experience for anyone, it’ll be especially remarkable for Hawking, who suffers from ALS, a disease that rendered him immobile for more than 40 years. Incapable of most motor functions, he’s bound to a specially designed wheelchair and communicates using a text-to-speech system that he controls using a sensor activated a muscle in his cheek.

You can watch the aforementioned part of the interview below (starts at 9:05):

While it’ll be Hawking’s first time in space, it won’t be the first time he’ll experience weightlessness. In 2007, he flew into zero gravity aboard a specially-modified Boeing 727-200 aircraft.

Sir Richard Branson, who founded the Virgin Group, said in 2015 that he hoped to be able to take Hawking to space, and that he’d offered him a free ticket which he could avail if his health permitted it.

A flight aboard Virgin Galactic’s eight-seater SpaceShipTwo costs $250,000 a pop. ‘Future Astronauts‘ hop on board the craft that’s mated to the WhiteKnightTwo rocket. The spacecraft will release from the launch vehicle at an altitude of 50,000 feet, and then accelerate to approximately three and a half times the speed of sound towards outer space, which is generally recognized by NASA as beyond the threshold of 50 miles (80 kilometers). That’s when you’re awarded your astronaut wings.

Once you’re in space, you’ll be able to experience weightlessness, maneuver the spaceship and see earth from space for several minutes before preparing for re-entry.

700 people have already signed up and forked over deposits for the trip. According to Forbes, SpaceShipTwo could launch by the end of 2017, but Virgin Galactic says that’s only an internal milestone.

Read next: Amazon Music might land in India in 2018