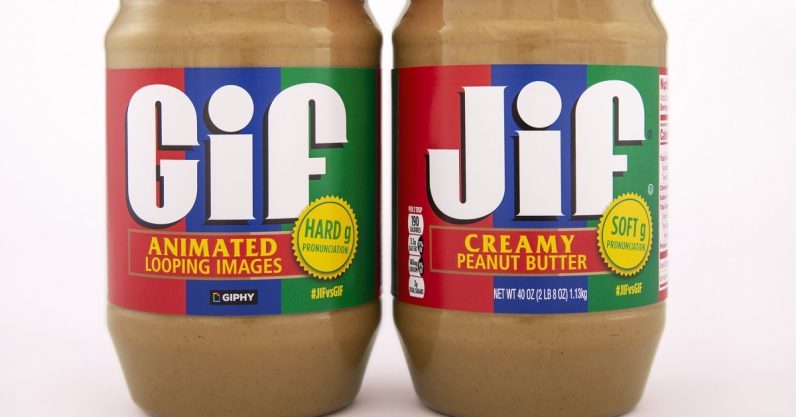 If you've ever called a GIF a JIF…we forgive you!!!!

…but, so it never happens again, we've made some GIFs (and a collectible jar) with @JIF to clear things up
#JIFvsGIF

This jar is a collaboration between Giphy, the website where you go for GIF content, and Jif, the peanut butter company, in honor of National Peanut Butter Day on March 1 (no, I hadn’t marked it on my calendar either). It’s Jif’s signature product, with a label wrapped around the side that tells you how to pronounce the two different words — or word and acronym, however you want to look at it. Giphy’s side, the “Gif,” says it’s a hard g, or a “guh” sound, while the Jif side is a soft g or “juh” pronunciation.

So there you go, debate solved, right? The lid of the jar even says “If you’ve ever called a GIF a ‘Jif,’ we forgive you.” I’m sure the person who invented the Gif, Steven Wilhite — who pronounces it with a soft g — will graciously accept your mercy, Jif.

Needless to say, I’m sure the definitive pronunciation is influenced at least somewhat by Jif not wanting their product to be confused with the staple of internet humor. While I’m sure it wouldn’t exactly hurt the peanut butter company — which has existed by that name for over fifty years — there is such a thing as brand confusion. Rebecca Schiedler, Jif’s head of marketing, basically said as much on the release: “We’re teaming up with GIPHY to put a lid on this decade-long debate and prove there is only one Jif… it’s creamy, delicious peanut butter, not a looping picture you can send to make friends and family laugh,” she said, which seems rather insistent to me.

This is a little amusing since anecdotal evidence suggests that Wilhite chose this pronunciation specifically to echo the name of the peanut butter. The GIF pronunciation page says some of the people who originally used the format would say “Choosy websites choose GIF,” a take on Jif’s own slogan from my childhood: “Choosy moms choose Jif.”

Then again, there’s an equally fervent party — with a similarly named website, no less — that argues it should be pronounced with a hard g because it’s short for Graphics Interchange Format. That’s also a valid argument, as far as I’m concerned. So… yeah, this debate isn’t settled, is it?

If you want to buy yourself a jar, you can find it on Amazon here. They’re still in stock at the time of this writing.

Read next: Microsoft CEO Satya Nadella wants to use diversity to remove bias in AI