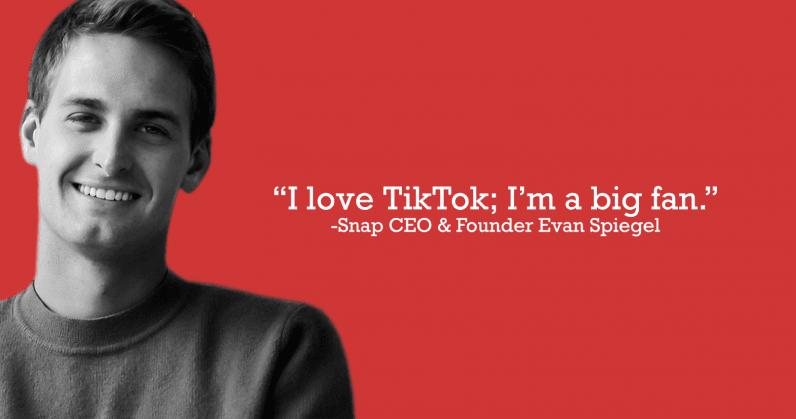 Evan Spiegel knows a thing or two about the social space. For eight years, his startup, Snapchat, has been chasing giants in this space. And now he thinks a new competitor, TikTok, the short-form video app, has the potential to dethrone Instagram as the world’s third-largest social application — if you aren’t including chat platforms like Messenger, WhatsApp, or WeChat.

During a fireside chat yesterday, at Digital Life Design (DLD), Spiegel responded to an audience member question about his opinion on TikTok. “I love TikTok; I’m a big fan,” Spiegel said. He then elaborated: “Social media in its original construct is really about status, representing who you are, showing people that you’re cool, getting likes and comments, those sorts of things.”

Users, Spiegel said, are creating content on TikTok to show off talent rather than social status. “People who have spent a couple hours learning a new dance or think about a funny new creative way to tell a story, and they’re really making media to entertain other people,” he said.

Spiegel thinks this could be the key to passing Instagram. “I think it’s certainly possible because this talent-based content is often more interesting than status-based content.”

Instagram is doing what it can to counter the trend, deciding recently that it would remove public-facing like counts on posts to foster an environment that appreciates content, not celebrity. It may be too little, too late.

TikTok unseated Instagram on the list of most-downloaded social media apps in 2019. Worse, Instagram’s growth slowed to single digits for the first time since it launched in 2010. Currently, both TikTok and ICurrently, the two are neck and neck in terms of monthly active users, with both sitting at around one billion. Spiegel’s Snapchat, comparatively, had 210 million daily active users at the close of 2019.

Read next: Scientists invent robot that climbs surfaces like Spider-Man