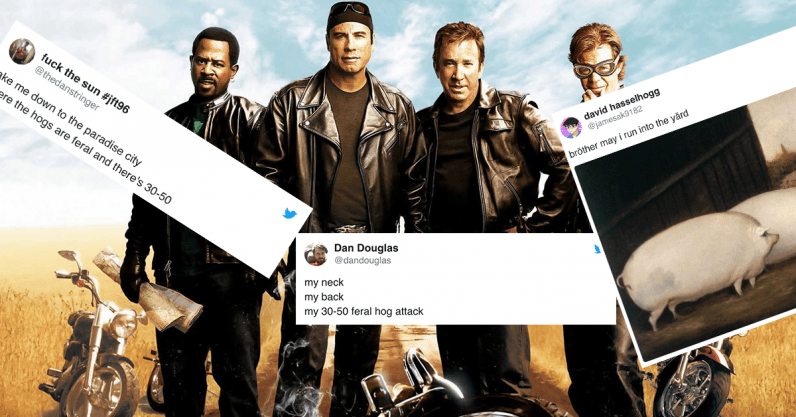 If you’ve opened Twitter today, you’ll likely have been inundated with a single theme: feral hogs.

Yep, when I stirred, and flipped open my phone this morning, my feed was filled with memes about garden-roaming, kid-attacking wild swine. I was utterly confuddled.

After a bit of digging, I found the tweet that started it all:

Legit question for rural Americans – How do I kill the 30-50 feral hogs that run into my yard within 3-5 mins while my small kids play?

Now, anyone who spends any sort of time online knows memes aren’t newsworthy by themselves. Yes, they’re an integral and longstanding part of internet culture, but are generally fast moving and light by nature.

But the feral hog meme is different. It stood out in a way that’s representative of a very online way of dealing with tragedy.

Of course, things on the internet spread quickly, but the feral hog appeared faster than most. When I went to sleep, it was nowhere. When I woke up, it was unavoidable. This graph from Jason Baumgartner highlights its sheer scale:

But the real meat of the meme is its context. You don’t need reminding about the two horrendous mass shootings in El Paso and Dayton over the weekend.

The origin of the meme (the aforementioned tweet) is a ridiculous response to a post condemning the ownership of “assault weapons.”

Whenever a mass shooting occurs, the issue of gun regulation rears its head, yet nothing ever changes. Hell, I don’t even live in the US and I find the discussion demoralizing and exhausting. No other country in the developed world has the same lack of gun regulation and the same sort of murders. I mean, as of October 2018, 61 percent of Americans wanted stricter gun control.

But everything stays the same.

The feral hog meme isn’t just about making fun of someone who believes they need a machine gun to protect their children from a swarm of swine — although that is definitely part of the joy. No, it’s something more than that. It’s a way of taking control of the uncontrollable.

There’s a powerlessness in watching the same awful, preventable thing happen time and time again, and no one in power lifting a finger. It’s a dreadful, crushing feeling, but humour gives people an escape, a way of finding some connection and humanity in a monstrous situation.

The feral hog meme is a mass in-joke, a reversion of order, a serious point swaddled in mirth. In other words, it’s seriously online.

It’s the way we make sense of tragedy today. It encapsulates the best side of the internet.

In my mind, there’s only one way to conclude this. So, please, sit back, and enjoy some of my favorite feral hog memes:

ME, SEEING EXACTLY ONE ADDITIONAL HOG RUNNING INTO MY YARD: pic.twitter.com/6MTXSDK8qb

In ~72 hours this will be completely incomprehensible pic.twitter.com/QljE5XSWHM

AITA: Me and 29-49 of my friends rush this guy’s garden every morning trying to eat his kids

30-50 feral hogs? At this time of year? In this part of the country? Localized entirely within your yard? pic.twitter.com/h1qtP2IFbq

This is Just to Say

I have eaten
the kids
that were in
the backyard

Who you
probably left for
three to
five minutes

Forgive me
I am thirty to
fifty
feral hogs

Read next: Meet the YouTube Mortician teaching people not to fear death