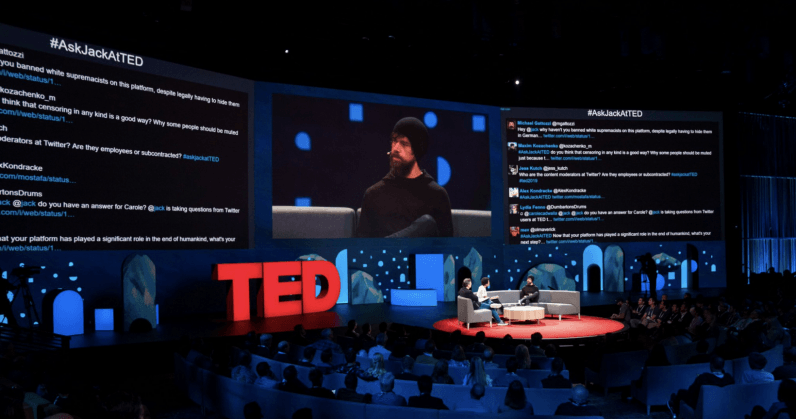 Ted Talk organizers today hosted a conversation with Twitter CEO Jack Dorsey. The conversation went mostly as planned. It centered on opportunities and challenges faced by the platform, and what it was doing to address them. But in one bit of poor planning, someone decided it’d be a good idea to feature a hashtag, #AskJackAtTED, on a projector screen behind Dorsey during the talk.

#TED2019, were you overwhelmed or distracted by the questions on the screen? Take a look at what everyone asked on #AskJackAtTED.

Thank you to everyone who participated in our conversation with @jack. The video of the interview will be available on https://t.co/YLcO5Ju923 soon. pic.twitter.com/PYqX2l5vfR

Put a reviled public figure before a giant screen and let the Internet tell him what they think of him? What could possibly go wrong. It didn’t take long for Twitter trolls to sink their teeth in, reportedly forcing TED’s social media crew to pull the plug on what ended up being a really bad idea.

TED hasn’t published a link to the talk yet, but we’ve got a few examples to report thanks to images shared on, well, Twitter. They ranged from the obvious…

#AskJackAtTED Now that your platform has played a significant role in the end of humankind, what's your next step? Have you considered blowing up the sun? It seems like a logical next step.

to questions about Dorsey’s appearance…

Wow. Just wow. #AskJackatTED @jack – is your health ok? You look so different from the pic in the program. pic.twitter.com/03qyVtATJe

and the one question we all wanted to ask:

How do you feel about giving a platform to literal Nazis? #AskJackAtTED

For good measure, a TED employee even weighed in to make this comparison, which we fully agree with:

Black hole turns out to be less enigmatic than @jack and information escapes with considerably more urgency #AskJackAtTed #TED2019 pic.twitter.com/eABAKVhFnM

And that, kids, is why we don’t put controversial figures in front of a screen with live tweets. It’s eerily reminiscent of the time that Jonah Lehrer, a popular science writer, got Twitter-roasted in front of a similar setup while delivering a ho-hum apology speech after plagiarizing the New Yorker and Bob Dylan.

Update: A representative from TED reached out to let us know that Dorsey’s trial by fire (or tweet, as it may be) was never intended to last for the entirety of the talk. The organizers had always intended to shut down the board at some point during the talk.

Read next: Logitech's new Harmony Express is a universal remote powered by Alexa