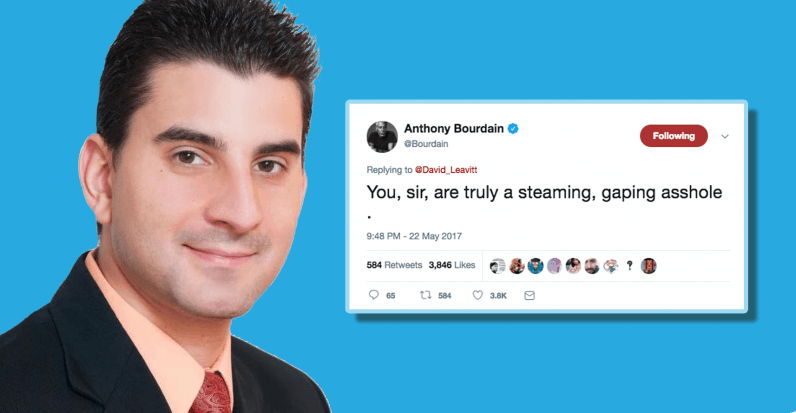 The dust hadn’t even settled in the concert venue before David Leavitt’s first ill-advised joke. After an explosion killed 22 people, including children, and wounded 59 others at a Manchester, England arena, Leavitt didn’t hesitate. Being first matters, even in tragedy, and especially on Twitter.

With a click of the send button, the tweet landed with a thud to the disbelief of nearly all who saw it. But Leavitt, a freelance writer with bylines at “CBS, AXS, Yahoo, Examiner, etc.” remained oblivious.

The last time I listened to Arianna Grande I almost died too.

Anyone who uses Twitter knows it isn’t exactly a wholesome place. Its alumni consists of Milo Yiannapoulos, a man who once defended pedophilia, David Duke, former Grand Wizard of the Ku Klux Klan, and Martin Shkreli, the infamous “pharma douche” who raised the price of a life-saving drug by over seven thousand percent before later being sent to prison on an unrelated fraud charge.

But even on Twitter, a place routinely described as “toxic” by those who use it, this attempt at humor made a mark.

While routinely playing host to racists, bullies, and all matters of undesirables, Leavitt’s tweet crossed a line. It wasn’t a jab at a “leftist snowflake,” or a racist rant about Muslims, it was an intentional smearing of dead children and the performer on stage who witnessed it, Arianna Grande.

Needless to say, it didn’t go over well.

Perhaps oblivious to what he had already done, Leavitt doubled down on the remark with another joke about Grande minutes later.

Honestly, for over a year, I thought an Arianna Grande was something you ordered at Starbucks.

Without context, the joke is a reasonable, if unfunny, attempt at humor. It’s a lighthearted swipe at a celebrity who, presumably, is used to hearing much worse. But in context, when layered over the recent events that transpired in the minutes and hours before, it’s abhorrent, reprehensible.

So abhorrent, in fact, the New York Times picked up the story, but not before Leavitt attempted twice more to insert his foot into the back of his throat.

The first attempt, a few hours after the first tweet, read:

And then there’s this… which I think is an apology?

Pro tip: Starting a tweet with “MULTIPLE CONFIRMED FATALITIES” and then later saying you didn’t realize the magnitude of the tragedy is not the strongest approach at damage control. Call me calloused, but the apology didn’t really strike me as sincere. But if you’re the optimistic type, Leavitt removed all doubt with a followup tweet the next day.

Which brings us to today.

On the internet, all things have a way of coming full-circle. Today served as a bittersweet reminder of this, and it’s thanks to Leavitt, who again found his foot ankle deep in his pie hole.

After the Manchester tragedy, celebrated chef, TV host, and author Anthony Bourdain was just one of many to express his thoughts about Leavitt’s reprehensible comments. The response, found below, is in reference to the original inflammatory tweet about the Manchester bombing, which Leavitt has since deleted.

You, sir, are truly a steaming, gaping asshole .

In an attempt to secure the grand prize in what I can only assume is a tournament to be the biggest asshole on Twitter, Leavitt decided to try his luck once more. This time, he used a tragic death to remind us all that Bourdain was obviously a good judge of character, and Leavitt is indeed a “steaming, gaping asshole.”

Selfishly taking your own life and hurting your friends and family makes you the steaming, gaping asshole Anthony Bourdain. pic.twitter.com/hBOxQ1W32e

But after taking his life this morning in a French hotel room, Bourdain won’t be returning fire this time.

For Leavitt, and others like him, tragedy presents opportunity. And the 3,000-plus followers he’s lost since using Bordain’s death as a springboard into the spotlight is a minor price to pay for this type of recognition. His comments, while utterly ridiculous on their own merit, did indeed shine a spotlight. This spotlight, however, only revealed the true nature of the man standing beneath it, a man willing to take a victory lap while mocking mental illness and suicide.

Unfortunately there’s nothing in Twitter’s terms of service that forbids one from being a pretentious schmuck.

My mom, who struggled with mental health issues of her own before passing away late last year after a long battle with cancer — in case Leavitt wants to take a jab at her — once told me that only the weak prey on the tragedy of others.

If that’s true, and I believe that it is, Leavitt is undoubtedly the type of man she was talking about.

Read next: Crocodile snacks on internet-famous terrier after years of torment (Warning: Graphic)