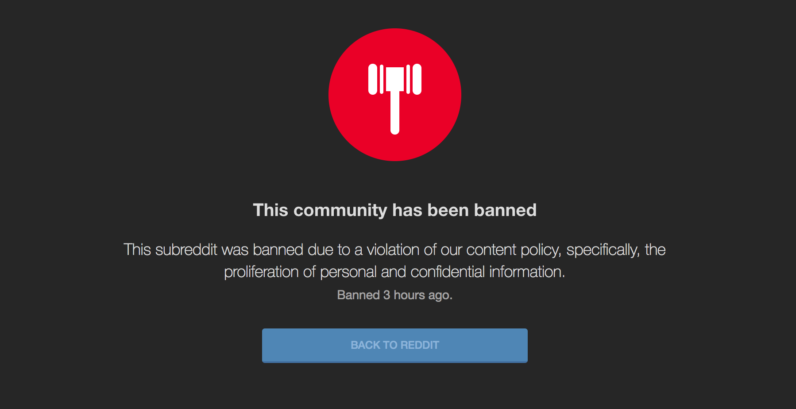 Reddit today blocked two prominent alt-right subreddits over “the proliferation of personal and confidential information.” Commonly referred to as ‘doxing,’ it appears a user (or users) of r/altright and r/AlternativeRight intentionally disseminated personal information of the man believed to have punched alt-right mouthpiece Richard Spencer.

We are very clear in our site terms of service that posting of personal information can get users banned from Reddit and we ask our communities not to post content that harasses or invites harassment. We have banned r/altright due to repeated violations of the terms of our content policy. There is no single solution to these issues and we are actively engaging with the Reddit community to improve everyone’s experience.

Controversy surrounding the alt-right started before the election and doesn’t seem to be going anywhere. The fringe conservative movement serves as an amalgamation of several other loosely-knit, right wing, political groups. Inside the group you’ll find a curious blend of white nationalists, Trump supporters, and various stragglers who took a wrong turn at a tea party rally, among others.

Many believe the groups motives are inherently racist, although they do seem to agree on some policy-related decisions such as immigration, taxes, gun ownership, and the desire for a smaller government.

At the republican national convention last year, de facto spokesperson — and former executive chair of Breitbart News — proudly declared Breitbart to be the “platform for the alt-right.” For a more thorough picture of what the group stands for, you need look no further than the incendiary site, or its vile headlines:

Reddit’s move today shows the company is interested in hosting a platform designed around free speech, but is willing to take a stand when subbreddits push the envelope to far.

It’s unclear if this move will have any real impact on the alt-right. The group is tech savvy — unlike most conservative fringe movements before it — and appears to be capable of finding new corners of the internet to lurk in. After the ban, the community moved to a Reddit-like alternative, Voat — where conversation about the ban is still happening.