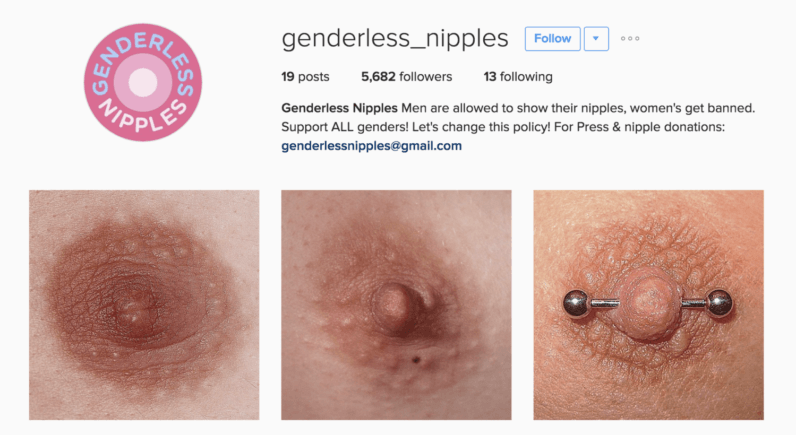 And I just learned a third thing: I’ve now used “nipple” four times in the first 50 words of an article (this mention included) — achievement unlocked.

Genderless Nipples’ Instagram account has over 5,000 followers and subscribes to a single mission: nipple equality. According to its bio:

Men are allowed to show their nipples, women’s get banned. Support ALL genders! Let’s change this policy!

To raise awareness of the social network’s hypocritical stance, the account features images of both male and female nipples. Each are cropped close enough to make it impossible to tell the difference. This puts Instagram in a rather precarious place, as the gender-neutral nipples are both acceptable and unacceptable under its current Community Guidelines — Schrödinger’s Nipple, if you will.

We know that there are times when people might want to share nude images that are artistic or creative in nature, but for a variety of reasons, we don’t allow nudity on Instagram. This includes photos, videos, and some digitally-created content that show sexual intercourse, genitals, and close-ups of fully-nude buttocks. It also includes some photos of female nipples, but photos of post-mastectomy scarring and women actively breastfeeding are allowed. Nudity in photos of paintings and sculptures is OK, too.

Every part of that rings as hypocritical. Boobs are fine, so long as they’re removed or there’s a baby hanging from one. They’re also fine in paintings and sculpture, but the real thing is akin to sexual intercourse and genitals — at least according to Instagram. In a comment to Wired, Instagram said it was “deeply invested” in creating a space for people to “express themselves” but warned it had to be mindful of “different ages, backgrounds and beliefs.”

Fair enough. So, for the sake of argument, are we to believe that this (NSFW) is fine on Instagram, but this is damaging our children if it were to contain a nipple?