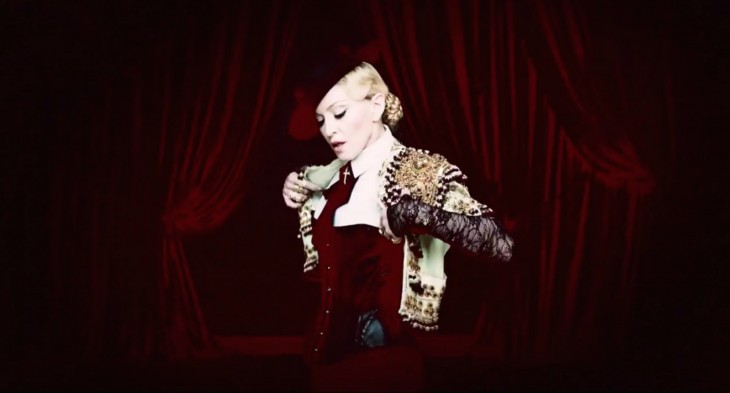 Madonna premiered her new video, Living for Love, on Snapchat this week. And you’ve got to hand it to her: No middle aged lady can pretend to be a millennial quite like Madonna. She has reinvented herself more often than Apple has disrupted markets by releasing a new iProduct. In fact, I quite like the latest incarnation of Madonna, “Lady Gaga.”

But I find the video release a bit confusing. First of all, if you’re a real Madonna fan, you must be, what, in your 30’s? If you’re in your late 30’s, what are you doing creeping around on Snapchat? Stop sending pics to my niece and get your old ass back on LinkedIn or Facebook where you belong.

It’s gotta be a bit confusing for Snapchat users too. They must be like, “Who’s this old lady and why does she think I’ll watch her sing to a minotaur for 4 whole minutes? She should get her old ass back to LinkedIn or Facebook where she belongs.”

Even Madonna must be thinking, “Snapchat? In my day, when you wanted everyone to see you naked, you had to publish a book!”

Right? Sex? You remember, the oh-so-naughty coffee table book Madonna dropped the same year she released the underrated, Erotica? Just me? That’s cool, I’ll get my old ass back on LinkedIn or Facebook where I belong.

Madonna wants to be relevant again. She wants to reach fans the same age as the fans she reached back when MTV was relevant.

But a few things have changed since then. First, her brand of eros seems a bit 50’s-TV-couple-sleeping-in-separate-beds for this millennium. Her peek-a-boo videos and cinematic Truth or Dare are nothing compared to the pics sent back and forth on the very same Snapchat on which her video premiered. Her message of open sex and backup-dancers-with-benefits is now called Tinder.

Plus, whereas Madonna has always led musically, or at least she was always the first to borrow an underground trend and popify it, she has some catching up to do when it comes to social platforms and reaching the group she likely refers to as “young people.”

The new her, Lady Gaga, has 44 million followers on Twitter and 5.2 million on Instagram. Madonna’s numbers are half a million and 2.9 million. (Mine are less than a thousand and 60 – so if you’re reading this, Gaga, can a little monster get a retweet?)

Of course Snapchat wants this to work so it can deliver, and eventually monetize, content. It did so with its original content last week, and this week, a music video (both of which are lengthy for the platform, all things considered). The real question is, who is this music video helping: Snapchat or Madonna?

Madonna, unfortunately, didn’t include that in her video. Early Madonna would have.

Read next: Curioos augmented reality art market lets you view prospective purchases on your own wall