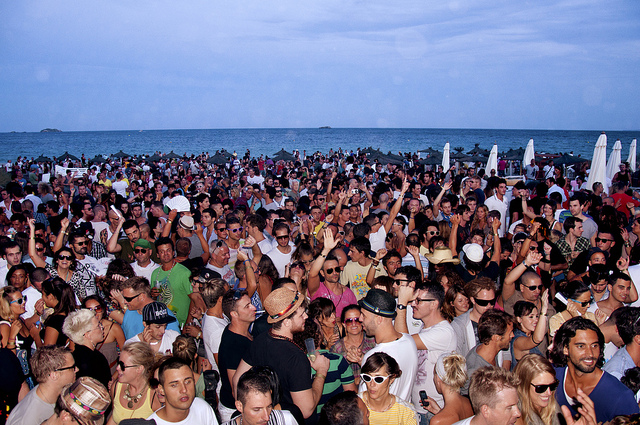 As you may remember, the agency already attracted a lot of attention last summer when it first showcased this technology at the Ushuaïa Beach hotel in Ibiza. With the public launch of its concept, it is now taking things to the next level, and potentially enabling any event organizer to do the same as Ushuaïa.

In practical terms, Wesharephotos.com’s service consists of sending its promo team to your event, where they will take pictures of the attendees, which will be automatically shared on their Facebook walls thanks to the wristbands they are wearing. Here’s how it works:

From the visitor’s perspective, it makes things easier than fumbling with your phone and Facebook account in the middle of a party. If you are wondering what’s in it for brands, Dorst & Lesser points out that the wristband and picture’s border can be customized, which makes them an interesting advertising and marketing support for companies keen to go viral on Facebook.

Here’s an example of what it looks like in the real (albeit glamorous) world:

Pacha and Ushuaïa are only two of Dorst & Lesser’s clients, as the agency has also worked for Renault, MINI and Transavia, showing that Wesharephotos’ potential could go beyond nightclubs.

On a higher level, it also shows once more how technologies such as RFID and QR codes can have concrete applications, and bridge the gap between online and offline.

Read next: Wander unveils its invite-only beta as a beautiful new way to share and experience the world