Emtrics‘ service is now publicly available to businesses, the Spanish startup announced during the Wayra Madrid Demo Day. As we reported, it lets companies of all sizes collect customer feedback in real-time at their point of sale locations.

As a matter of fact, its technology was already in use during the Demo Day itself, thanks to printed QR codes which let the investor-sprinkled audience give their opinion on each pitch.

From the user’s perspective, the process is very simple: all you have to do is to scan the code with any reader on your smartphone. This will then take you to a very short and well designed 5-question survey, where you only have to click on the emoticon that best describes your view.

According to Emtrics’ co-founder and CEO Iñigo Serrano, its solution will mostly appeal to businesses that heavily depend on customer satisfaction, such as restaurants, hotels and retail stores, who don’t necessarily have online support and may struggle to collect private feedback. In its perky introduction video, it uses the example of a restaurant owner:

As you can see in the video, businesses get access to a dashboard, where they can track their own surveys. While Emtrics’ service isn’t free, it is relatively affordable, even for small operations – its basic rate costs 30€/month, and the startup currently offers a one-month free trial on all plans. 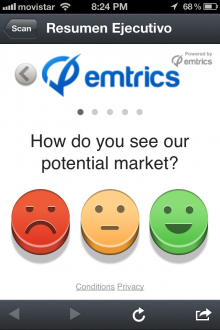 Emtrics’ pitch was particularly well received at the Demo Day – and not only because of its neat design. Beyond its cute emoticons, the startup has what investors crave: product/market fit, supported by strong numbers. During its acceleration cycle at Wayra, Emtrics tested its concept at 150 points of sale, belonging to 50 companies such as Muji, Movistar, Reebok Sports Clubs and NH Hoteles. Over that beta period, it collected over 4,000 comments and 50,000 ratings from 10,000 clients.

If you are wondering how it compares to traditional offline methods, such as printed surveys, Emtrics says that its system boosted the number of collected answers by as much a 50 multiplier. Based on these encouraging figures, it expects to close 2012 with over €100k in revenues.

Unsurprisingly, these early results didn’t go unnoticed; besides the founders’ initial investment and the seed capital it received from Telefónica’s accelerator, totaling €120k, Emtrics has secured an additional €100k since we first met its team in February. According to the startup, it now expects to close another round of up to €300k by the end of the year, which it will mostly use to recruit staff.

There’s no doubt that Emtrics’ team is one of its main strengths. Its CEO is also the former head of Meditel (Telefónica Morocco) and regional director Mobile at Telefónica Latin America, while its CTO Eduardo Giménez used to be a senior backend engineer at Tuenti, the Spanish social network which is now part of Telefónica Digital’s portfolio.

On a final note, it also shows how clever it was for the telecommunications company to launch its own accelerator and keep on working with talent who would have entirely left otherwise.