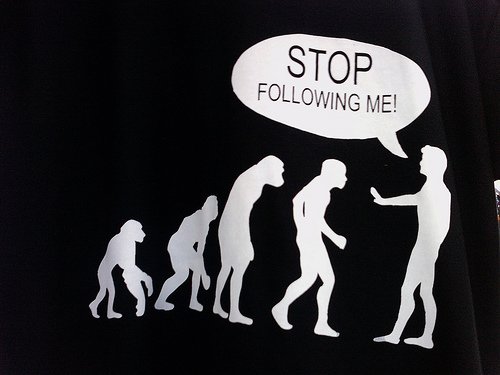 This is something that’s been bugging me for a while now, so I figured that this was as good of a time as any to let it out there.

Who and what you retweet is not a sign of the influence you have. It doesn’t make you cooler. It isn’t a “Hah! Look at me!” moment. It is simply a way of saying “Hey, I found this interesting, and you might too”.

With the sudden influx of sites that are attempting to use Twitter to measure a person’s influence, it’s no surprise that we’re seeing more and more retweets of things. The problem with that, however, is that those of us on the blogging side of the world can see some pretty ridiculous trends.

I wrote an article on my personal site (which I won’t link to here, but I’m sure you can find via a quick Google search) that brought this right into the forefront. I screwed up, one day, on TNW. I posted something that I quickly thereafter found out was really old. So I pulled the post down with a 301 redirect that went to the TNW front page.

That non-existent article got over 100 retweets in less than an hour. At last count, actually, it was nearing 200 as the title continues to float around the Twitterverse.

Tossing out an educated guess, I’d say that a typical TNW article gets retweeted about 1/4th as much as it is read. So if you see 250 retweets, you can bet that roughly 1000 people have read it. That number fluctuates, of course, but that should be pretty solid.

With that in mind, we sometimes see articles (like one that @m4tt wrote today) that have huge retweet counts that can even surpass their read counts.

It seems to me that most retweets happen because people find something interesting and want to pass it on to their friends/followers. However, in doing that, often times it happens before someone actually reads what they’re tweeting.

What happens, as a result of this, is an overall watering down of the quality that gets pushed around Twitter. The service that can sometimes be the fastest way to disseminate can also be diluted of quality content so quickly that it becomes momentarily irrelevant

Then, of course, there is the flip side. Some folks will retweet things very quickly, without so much as reading the story behind it, simply so they can be the “source”. The problem with that, however, is that they’re not the source. The source is what they’re retweeting.

It goes along with an article that @Alex wrote about things that you need to stop tweeting about. The fact is, the majority of huge people or sites get their stuff retweeted. So much so, in fact, that when you add to that it just becomes spammy.

In the world of Twitter, it is everyone’s job to play “Miss Manners“. If someone’s being spammy, call them out on it. This includes me, as well. I want to know when I’m annoying people, because it can happen easily given the amount of things that catch my attention.

If someone’s being a douchebag, retweeting the things you’ve already seen a few hundred times, there is one simple solution: Unfollow.

And finally, for the love of God, don’t retweet an article before you re-read it. The next thing you know, you’re retweeting a catchy headline that has nothing to do with the actual content. Egg on your face? You bet.

Read next: Could this be the dumbest forum post ever?