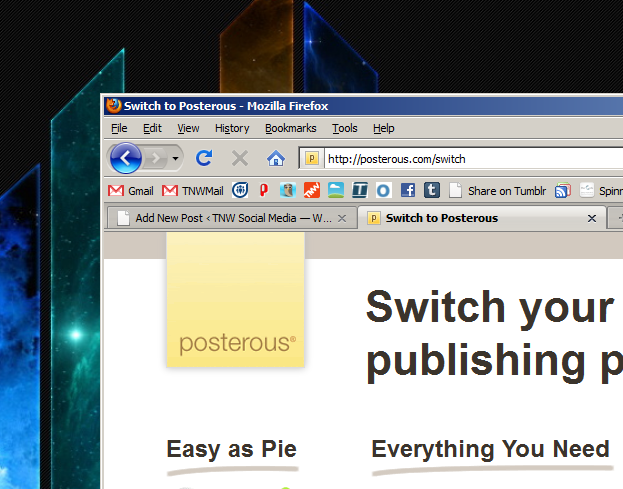 There’s some mumbling going on in the blogging world about the new toys released from Posterous.  The ideas, in theory (and often in practice) are great, but the latest seems to be a bit overhyped.

What Posterous has done, in the past few weeks, is make it very easy to import your content and then switch over to its platform.  While it’s a welcome feature to be able to switch from some services, Posterous is next setting its sights on WordPress, and that just doesn’t make much sense.

As the story goes, as of tomorrow, you’ll be able to import your WordPress content directly into your Posterous account.  That import, apparently, is all-inclusive.  You’ll not only have your articles imported, but also the tags, images and even comments.

With that function, Posterous will take a nice position in the hierarchy of blogging platforms.  As Dave Winer explained in a great post recently, Posterous presently sits at the lower end of the platorms, just above Twitter.

Having more function, and essentially offering the same base substance of WordPress would open a lot of doors for Posterous.  Instead of just being somewhere that you could stick random items, the site is positioning itself to become a viable blogging platform.

The question, of course, is whether anyone will bother.

Of course you’ll have a few who will jump ship from WordPress, because the platform just isn’t fit to the type of content that they are producing.  However, I’m going to venture out on a limb here and say that it won’t make anything more than a light ping in the surface of the overall WordPress user base. Why, you might ask?  The answer comes down to a difference in user.

Don’t get me wrong, Posterous is a great service.  I have one of my own, and I update it when I find cool things.  It’s often useful for quick posts, and I could easily see it becoming a main platform for a lot of users who don’t have in-depth blogs.

But then there’s the other side of WordPress.

From the ground up, especially with the latest version, WordPress is built to be a monster of a platform.  Its depth and ability are, seemingly, endless.  This is what sets it clearly apart from the rest of the micro-blogging world.  And let’s face it, the majority of Posterous sites that we see are micro-blogs, only a touch longer.

So while we welcome more choices, WordPress is far from the graveyard.  In fact, the service seems to be at a crossroads of maturity where it’s finally reaching its full potential.

Our own Chad and Alex bring up interesting points: Maybe the whole move at overthrowing WordPress is simply just a great piece of marketing.

Read next: Posterous will import Wordpress...and few users will care.