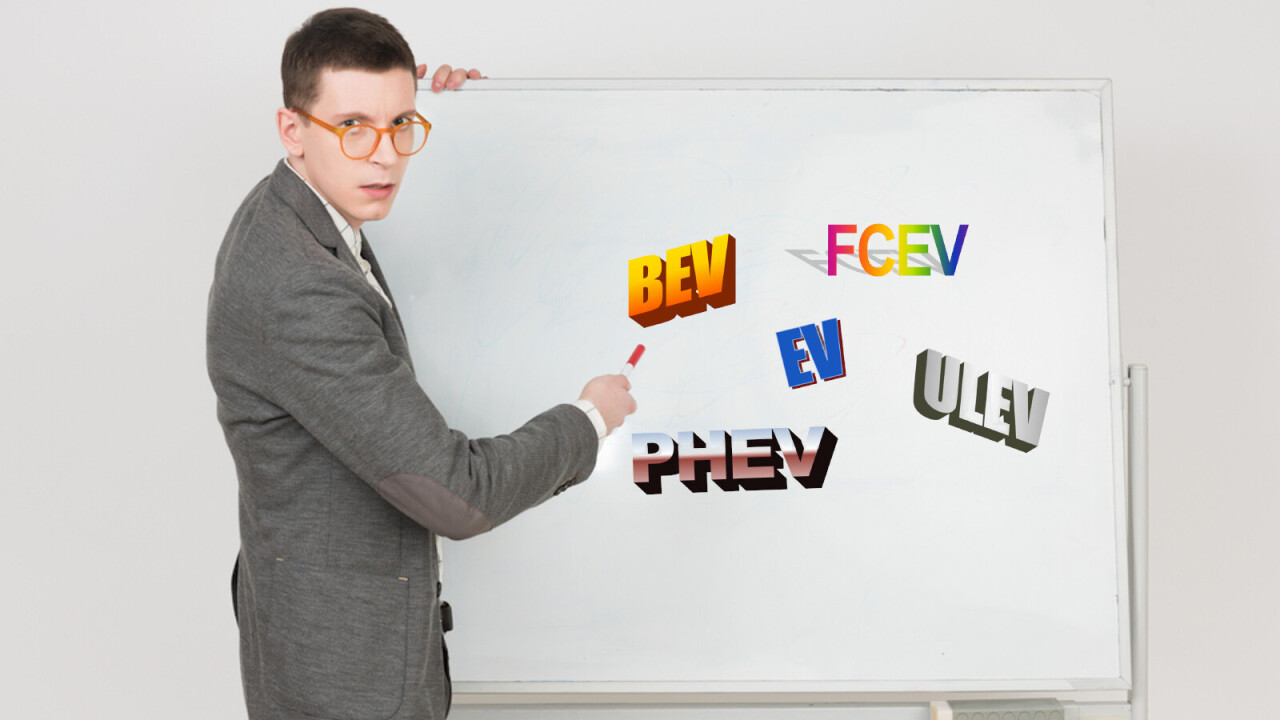 When it comes to more sustainable driving, there is a whole host of options now and it can be confusing knowing what’s what. In the olden days you pretty much had the choice of diesel or petrol, but with the ever-evolving market of low-emission vehicles, there’s more choice than ever.

When it comes to “EVs,” you can choose from BEVs, PHEVs, HEVs, or FCEVS, all of which are classed as ULEVs. But what do all these acronyms actually mean?

If you need some quick pointers on what all these acronyms stand for and what they refer to specifically, look no further.

Let’s start with the most common type of EV, and the type of vehicle we usually refer to when we’re talking about EVs: the battery electric vehicle, or BEV.

As the name suggests, a BEV is an electric vehicle that uses batteries to store and deploy power which powers electric motors to drive the wheels. It’s also common to see words like “pure electric,” or “all-electric” when you read about battery electric vehicles.

Popular BEVs include cars like the Nissan Leaf, the whole range of Teslas, the Polestar 2, the BMW i3, Hyundai Kona Electric, Kia Soul EV, VW’s ID.3 and e-Golf, the Jaguar i-Pace — you get the idea.

It gives you the flexibility to drive and use your PHEV like it was a BEV and not rely on the combustion engine, for very short journeys at least. They typically have very small batteries and are only capable of driving between 30 and 50 miles on all-electric mode.

Regular hybrid vehicles (HEVs), like the original Toyota Prius, can’t be plugged in and the only way to charge their batteries is from regenerative braking or by using the engine like a generator.

Some companies have even referred to these vehicles as “self-charging hybrids,” as if not having to plug them in is a benefit. That phrase has been branded as misleading, and Toyota and Lexus ads in EV loving Norway using the tag line have been banned for being misleading. In reality, to charge them, you need to fuel them with gasoline.

FCEV stands for, Fuel Cell Electric Vehicle. These are a small offshoot of EVs that use hydrogen fuel cells to create an electrical charge that’s used to power motors that drive the wheels.

Most FCEVs use a small battery or super capacitor to act as a buffer between the fuel cell and the motors to ensure power delivery is consistent and reliable.

Some tout fuel cell vehicles as a better option than batteries for the future of sustainable transport. They can be filled up in the same way as a combustion engine vehicle, hydrogen is the most abundant element in the world, and their only waste product is water vapor.

The main issue with this is that there’s hardly any hydrogen infrastructure and very little choice of hydrogen vehicles. The Toyota Mirai is one of the few H vehicles currently available, in fact, James May, of Top Gear/Grand Tour fame, has one.

GM recently said that it would be building Nikola’s hydrogen truck but that’s a few years off, so maybe things will change.

Ok, ok, I know; technically Ultra-Low Emissions Vehicles shouldn’t be in an explainer about hybrids and battery electric vehicles. But it’s a common acronym used to describe the whole collection of vehicles that produce very low amounts of CO2, in the UK it’s a class of vehicle that produces less than 75 grams of CO2 per kilometer. In the US, it’s vehicles that produce less than half the CO2 per km of the current year’s average models.

By definition, battery electric vehicles and plug-in hybrids are all ULEVs, when driven appropriately. Take the Range Rover PHEV for example, according to EV Database, it produces 71 g CO2 per km, when driven in hybrid mode. If the battery is flat though, that figure shoots up to 214 g CO2 per km, which is, ahem, a lot. So take the ULEV moniker with caution.

So there you have it, now when you’re browsing the electric vehicle world you’ll be able to tell your PHEVs from your BEVs at a glance.