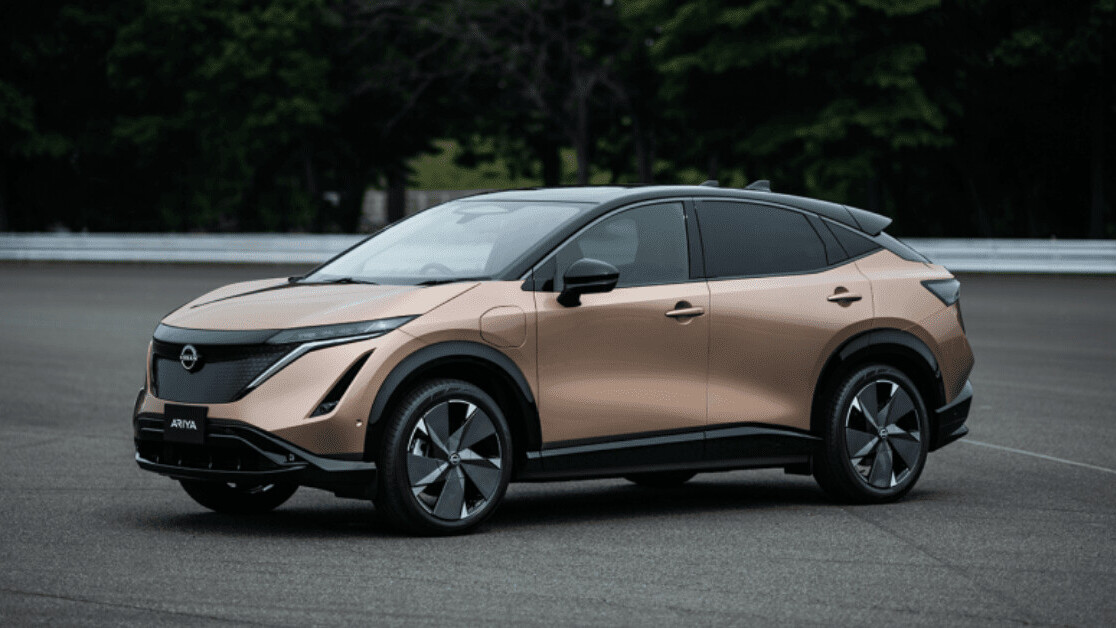 The Ariya is similar in size to Nissan’s best-selling Rogue crossover, but aimed at a new audience. The all-electric compact SUV will come in front-wheel drive and all-wheel drive (dual motor) versions. It offers two powertrain packages, a 63-kilowatt-hour (kWh) battery pack mated to a single 215-horsepower (hp) electric motor or an 87 kWh battery with 389 total hp from two motors. Range is estimated to be 267 miles for the smaller battery and 379 for the larger one, based on the generous WLTP test cycle. In the U.S., Nissan said it hopes to exceed 300 miles of range with the larger battery in a two-wheel drive configuration. Pricing in the U.S. will start “around $40,000,” according to Nissan.

Inside, the Ariya concept had a minimalist dash with two large (12.3-inch) display screens and haptic-touch control buttons. It will come with the latest version of Nissan’s Safety Shield 360 that will allow some hands-off-the-wheel driving. The Ariya will launch in Japan mid-2021 and arrive in the U.S. market before the end of next year, joining a crowded electric crossover field.

The Ariya will be Nissan’s first full electric model since the Leaf was introduced 10 years ago, but represents the tip of the iceberg for a Nissan new model push, according to COO Ashwani Gupta.

“The Ariya, a key model in Nissan’s plan to roll out 10 new models in 20 months, demonstrates our commitment to meeting customer demand for crossovers with the most advanced electrified, automated and connected technologies,” Gupta said. “The company expects sales of its EVs and E-power electrified models to be more than one million units a year by the end of fiscal 2023. The Ariya will play a significant role in attaining that goal.”

Following the Leaf is one challenge for the Ariya, since Nissan has sold almost 500,000 units worldwide during the past decade. But the real target has to be the Tesla Model Y, which was introduced this year, but has yet to take off in sales. Unlike the Ariya, which has the profile of traditional crossover, the Model Y looks more like an expanded sedan. Nissan said the key attribute for the Ariya will be “sports car-like power,” which translates into 0-to-60 mph performance in the 5.1-second range.

Nissan is also promoting the technology that will be available in the Ariya, a logical tie-in with an watershed vehicle like this. Featured will be Nissan’s next-generation ProPilot Assist 2.0 advanced driver assistance system (ADAS) that monitors driver attention to enable hands-off single-lane highway operation. The Ariya will also have a one-pedal operation mode that allows a driver to start, accelerate and decelerate to a stop using only the accelerator pedal.

Nissan is moving to over-the-air (OTA) updates on Ariya firmware to keep its software current. It will also include the Amazon Alexa app as well as Apple CarPlay and Android Auto to integrate the operator’s smartphone into the vehicle.

The Ariya represents a new design language for Nissan EVs, which it has labeled Timeless Japanese Futurism. It appears to be a refinement of its existing design patterns externally. Inside, the flat floor enabled by the EV platform and thin-profile Zero Gravity seats make for a more spacious cabin than is found in current gas-powered models.

Specs for the Ariya could change by the time the car arrives in the U.S. next year, but this is Nissan’s current configuration.