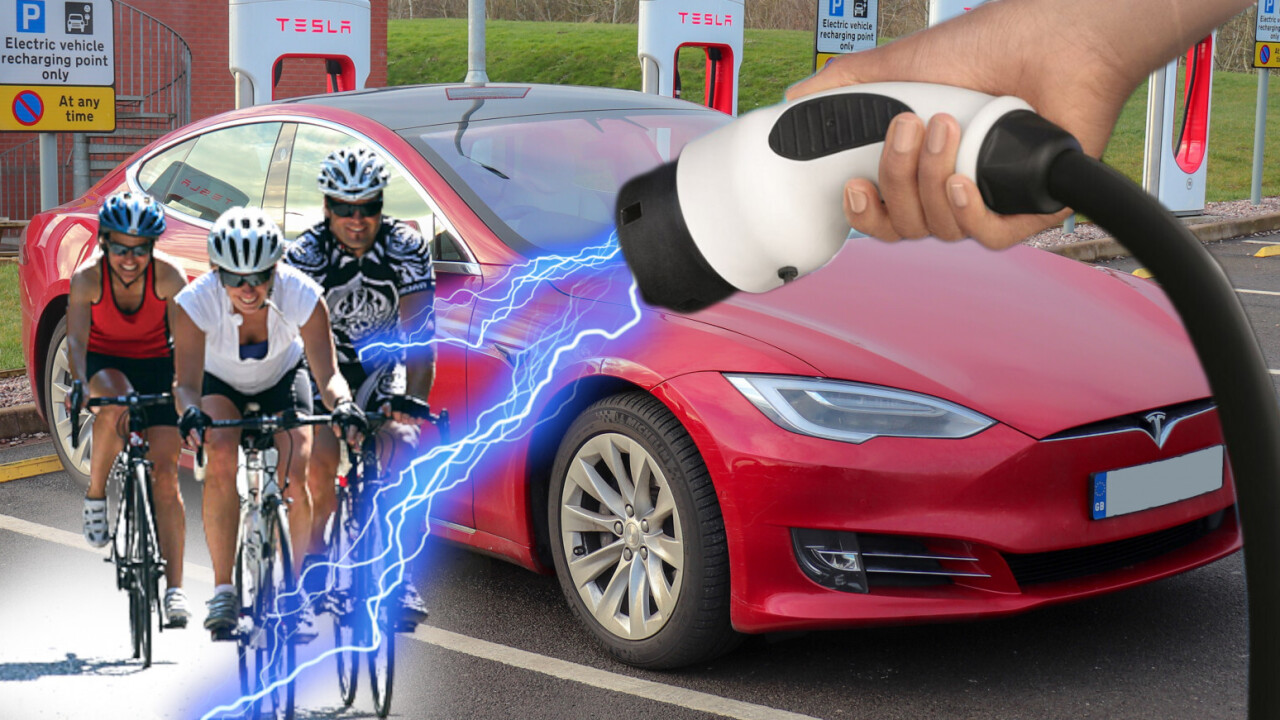 How many cyclists does it take to charge a Tesla?

No, this isn’t the start to a bad joke, it’s a legitimate question. It’s also one that Finnish record breaker show Ennätystehdas (or The Record Factory) managed to answer. Whether you actually should charge your Tesla using captive cyclists is another question entirely, though.

Given how little power the average cyclist generates compared to cars and how big Tesla batteries are, it should come as no surprise that you’d need a hell of a lot of cyclists to charge a Tesla at rates comparable to its supercharger network. But how many exactly would it take? Glad you asked. Before we dive in and figure that out, take a look at the video below.

In the video, which was shared by the concept’s creator yesterday, we’re told that the group of nine (quite fit looking) cyclists managed to generate 1 kW for 20 minutes. Assuming they could maintain this power output for an hour, that would be 1 kWh of energy.

If these cyclists were able to maintain their 1 kWh power output indefinitely though, it would take them 85 hours to charge an 85 kWh battery. But who can wait that long? No one, so what should we do? Get more cyclists obviously… but how many?

On the Tesla Supercharger network, Tesla vehicles can charge at a peak of 150 kW. This is enough to charge large battery Tesla EVs from zero to 80% in well under an hour.

Given that nine riders can produce 1 kW, to get to 150 kw of sustained power, we’d need 1,350 cyclists. I know they seem to be everywhere these days, but that’s a heck of a lot of two-wheeled friends. It’s about nine Tour de France worth of riders.

It’s also worth pointing out that while I say these are “quite fit looking,” they just so happen to be some of Finland’s top track and road cyclists. So their ability to maintain high power outputs for long periods of time will be significantly greater than the average untrained individual.

If we were using regular folk to charge a Tesla, we’d probably need twice as many to produce enough power to compete with the Supercharger network.

Let’s put this in context of one bad cyclist, me. I have a functional threshold power (FTP) of around 250 watts. That’s a quarter of a kilowatt, so to produce 1 kWh worth of electricity I would need to pedal at threshold for four hours.

If you’re not up to speed on cycling performance metrics, FTP is the estimate maximum power that a rider can maintain for just one hour going absolutely flat out. So um, yeah, good luck going four hours at that pace.

If it was me going it alone, charging a Tesla with an 85 kWh battery, I’d have to pedal at a pace I can only really sustain for an hour, for 340 hours, or two weeks straight, without stopping. Yeah, I don’t see it happening either.

If this doesn’t make you realize how much energy it takes to power an electric car, I don’t know what will.

If you’re still not convinced about how much electricity it takes to power these kinds of appliances, watch this video of world-class German track sprinter Robert Förstemann AKA Quadzilla (see video for proof) powering a toaster.

All things considered, if you want to charge your EV on pedal power, don’t. It’s probably easier to just cycle wherever you need to go.

After all, it took nine cyclists 20 minutes to add two kilometers of range to a Tesla Model X. On a bike you could easily go twice as far in that time.