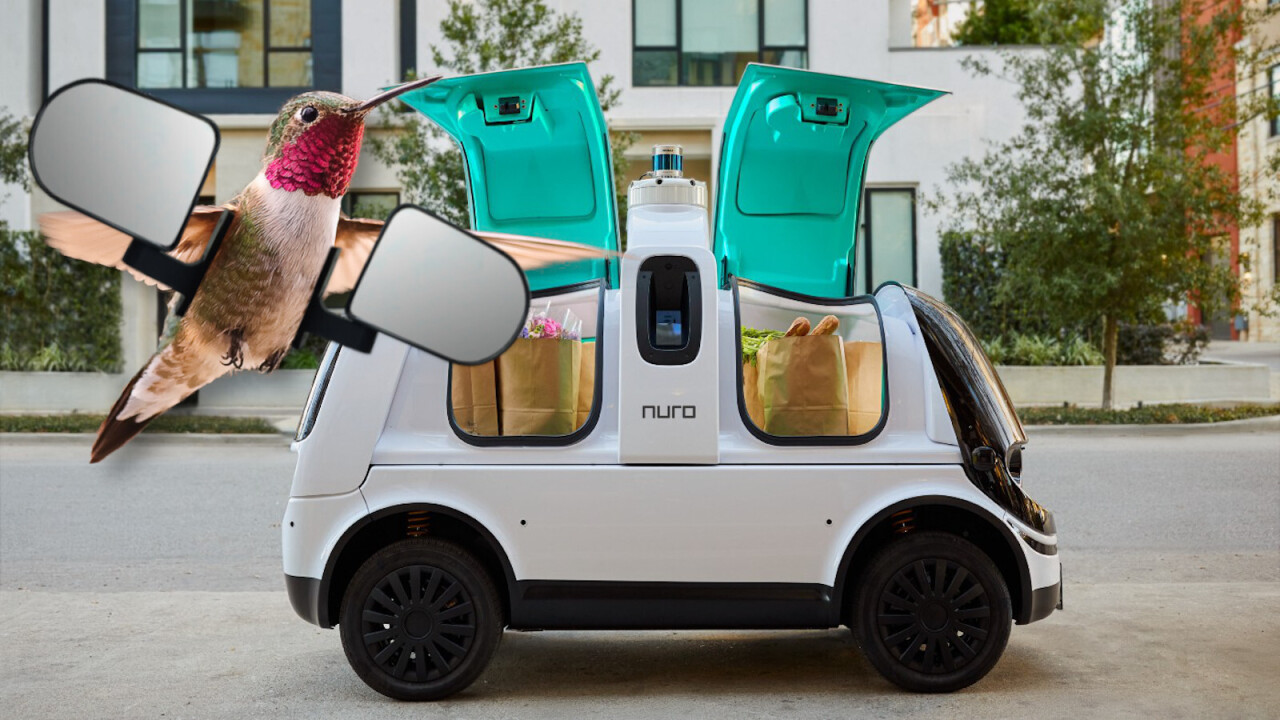 Last week, TNW reported on driverless autonomous vehicle company Nuro getting the go ahead to test its vehicles in some Californian cities. As I was reading up on the company, I watched one of its early promotional videos which featured a driverless autonomous delivery vehicle with wing mirrors. But why? Why would a vehicle packed with sensors and no space for a human driver require physical wing mirrors?

At one point, I thought it was all part of a big conspiracy and the Nuro vehicle featured in the video wasn’t autonomous, but was just a mock up with a human driver inside, and the wing mirrors were there to provide rear vision. This isn’t true, though.

Even though Nuro’s R1 vehicle is capable of driving with no human intervention, it needed wing mirrors because regulations said so. How boring.

According to a Nuro spokesperson, the company’s first generation vehicle that was tested in Scottsdale, Arizona, also needed a fully rigid windshield designed to protect passengers. Passengers that it doesn’t actually have.

Regulations also required it to deactivate any rear cameras when the car moves forward to prevent distracting its drivers. Drivers that it doesn’t need or have space for.

It should be fairly obvious that an autonomous vehicle doesn’t actually require any of these features to operate safely. In some cases, the regulations are actually counterintuitive; rigid windshields are actually less safe for pedestrians, for example.

Back in February, Nuro was the first company to receive a regulatory exemption, meaning that the company doesn’t have to install wing mirrors anymore.

The benefit of removing the mirrors is more than just aesthetic. The company says it can now make the vehicles edges rounder and remove protruding edges to make it safer. Nuro’s R2 is packed with sensors, including lidar, radar, and cameras, to provide a 360-degree view, so it’s not like it’s going to miss them.

What’s more, if the vehicle doesn’t need to protect any internal passengers, more focus can be placed on designing it to be safe for pedestrians and other road users.

Nuro has replaced its originally rigid windshield with an impact-absorbing front-end that can “collapse inwards in the case of a collision,” it said.

In the grand scheme of things, it seems that current laws will serve as nothing more than a stepping stone toward new regulations that will better support emerging autonomous technologies. For now, companies that don’t get an exemption will still have to put wing mirrors on their driverless vehicles — even if they are totally useless.

Nuro may have been the first company to be granted an exemption from current regulations, but it’s unlikely that it’ll be the last.