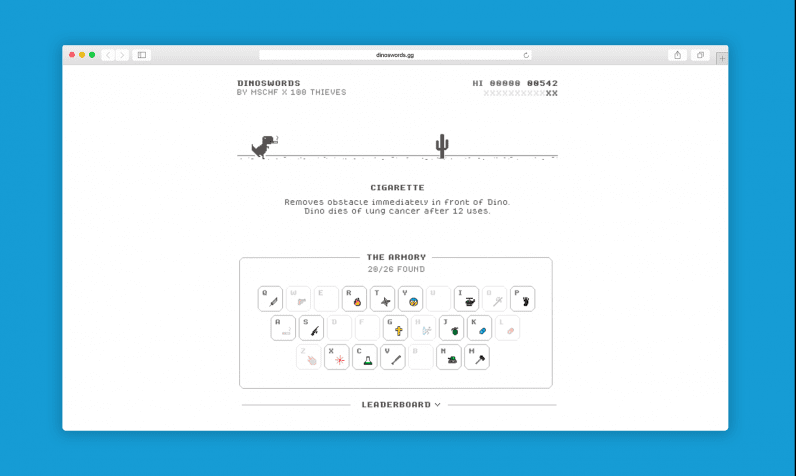 I’m sure you’ve played Google Chrome‘s hidden dinosaur game — but never with a bunch of guns and performance-enhancing drugs involved.

Enter Dino Swords, an outlandish mod of the popular game that spices things up with the addition of AKs, bows, swords, and time-slowing pills, among other things.

It pretty much relies on the same gameplay as Google’s version, with the exception that you can acquire other tools and weapons along the way. Each time you pick up a new accessory, the game prompts you to use it by highlighting a key on your keyboard.

“We have all played the Dino game in Chrome, and I don’t know about you, but on our end, we always had these fun ideas of how you could mod it — so we just decided to do it,” told me Daniel Greenberg from MSCHF, the creative agency behind Dino Swords. “Also, anything we can take from a big company (like Google) and mess with we will.”

When I asked Greenberg about his favorite weapons, he had a couple in mind. “The first is the double-edged sword not only because it looks sick, but the fact that it can and will kill you, is just so funny to me,” he said. “The second is the portal gun because its an insanely cool mechanism to have in a 2D game.”

Other stunts the creative agency has previously pulled include a pirate radio that streamed Netflix, HBO, and Hulu for free, a live remake of The Office in Slack, and this unholy Frankestein of MasterClass and wikiHow.

The game is a collab between creative agency MSCHF and esports clan 100Thieves.

“Dino Swords is our take on the classic Chrome dinosaur runner game, made extravagant with 26 weapons to help your runs,” 100Thieves founder Matthew “Nadeshot” Haag told TNW. “Many of them pay homage to classic video game weapons, some of them are totally OP, and some are completely useless. There’s even a few easter eggs that are pretty hard to unlock.”

Read next: This Philosopher AI has its own existential questions to answer