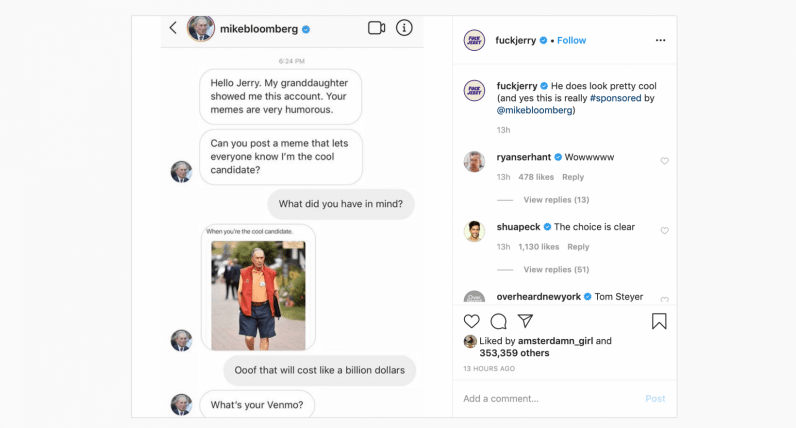 Presidential candidate Mike Bloomberg wants internet-savvy voters to know there’s a “cool” guy in the running — and what better way to appeal to younger audiences than memes… and Instagram.

Bloomberg has contracted a bevy of influencer marketing agencies to run a satirical meme campaign in support of his election bid. Honestly, it’s not even that cringey for a paid campaign. I hate to give this boomer any credit, but some of the memes are actually kinda funny.

Joking aside, the memes are somewhat self-aware. The whole meta approach with the DM screenshots doesn’t feel forced, and it also pokes fun at “Cool guy” Mike himself.

Of course, Trump gets this sort of meme material for free, but Mike is cool enough to pay for it. Good that Bloomberg has no restraints when it comes to spending, I guess.

“Mike Bloomberg 2020 has teamed up with social creators to collaborate with the campaign, including the meme world,” Bloomberg’s senior national spokesperson Sabrina Singh told CNBC. “While a meme strategy may be new to presidential politics, we’re betting it will be an effective component to reach people where they are and compete with President Trump’s powerful digital operation.”

[Read: Why Jeff Bezos might run for president to spite Elon Musk and Donald Trump]

The New York Times previously reported Bloomberg’s team had reached out to Meme2020 — a firm with ties to owner of FuckJerry, Jerry Media — to develop “a self-aware ironic character” around Bloomberg.

You might know FuckJerry as the monumental twerp that built a media empire from stealing other people’s memes. “Cool guy” Bloomberg has no problem with that, though, it’s all about being vibing with the youngins. I get it, 350,000 likes ought to earn a few new voters, and I’d be willing to put my integrity in the backseat for that, too.

It’s now entirely obvious Bloomberg has no holdbacks when it comes to unorthodox approaches to capturing voters’ attention.

Earlier in January, his campaign team had to confirm his social media accounts weren’t hacked after a series of bizarre tweets during the Iowa debate, including his thoughts on meatballs, how many batteries he could fit into his mouth, and the best body part to get a  Bloomberg 2020 tattoo.

That’s a bold strategy. Let’s see whether it pays off.

Read next: NASA, PayPal, Reddit, and Spotify are coming to TNW2020 – don't miss their talks