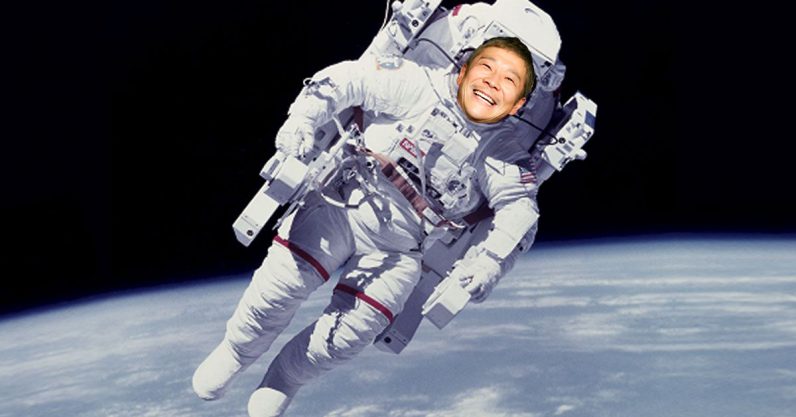 Back in 2018, SpaceX revealed its first passenger for a trip to the moon will be none other than Japanese entrepreneur and billionaire Yusaku Maezawa. The space voyage, which is slated to take place in 2023, has since generated quite a buzz. So much so, that a local streaming service has picked it up as a serious matchmaking documentary, dubbed Full Moon Lovers.

As part of this reality TV extravaganza, Maezawa is hoping to find a female playmate to accompany him on this stellar journey. Today, Reuters reported applications for this girlfriend vacancy have topped 20,000 entries, which, quite frankly, is ridiculous. But there was another tidbit that caught my attention.

[Read: SpaceX is flying a Japanese billionaire to the moon in 2023]

According to Reuters, the application form now includes a “love diagnostic test” which potential entrants can take to asses their compatibility with the billionaire. Here’s where things get spicy, one of the questions included in this quiz is: “If Maezawa farted in front of you what would you say?”

Ah, the deeply coveted first fart — it’s a “make it or break it” moment in a relationship. It could be a true sign of the maturation of a life-long soul-bonding experience between two humans, or a harbinger of an inevitably heart-wrenching break-up. It all depends on how you or your partner respond to this occurrence.

The social implications of ripping a phat one in front of your partner are already tough to unpack down here on Earth, but the stakes are even higher when it’s happening in space — because of science.

“If you fart,” Pitts continued, “the gas stays right there. It doesn’t go anywhere. It hovers right around there.”

That leads to another issue: Since they are flammable, farts are literally a fire hazard on a space shuttle.

“If you’re an astronaut, every fart is a ticking time bomb,” wrote Discover Magazine in reference to a 1960s study on the difference in fart flammability between different diets.

“The gases in farts are flammable, which can quickly become a problem in a tiny pressurized capsule in the middle of space where your fart gases have no where to go,” Discover continued. “[Scientists] discovered that the space diet actually produced more gas than the control diet, and noted that ‘volumes would be larger at reduced spacecraft and suit pressures.’ This explains why astronaut food doesn’t include freeze-dried beans.”

Explosion dangers aside, cutting the cheese in zero gravity is straight-up foul etiquette.

“[In space,] farts can kind of hang out,” American austronaut Mike Massimino told Gizmodo. “There’s not as much airflow as on Earth. You gotta introduce airflow to get rid of contaminants and carbon dioxide. We kind of have that going on too in space. The nice thing to do is to go to the restroom where there’s more ventilation to take the odor away.”

Unleashing flatulence in unventilated space areas can also cause civil disorder. “Probably similar to the way it happens on Earth, if you have to do it, either you do it in private or get people mad at you,” Massimino elaborated. “That’s the kind of thing that can lead to crew disharmony.”

Crew disharmony. I mean, read between the lines. It’s practically the space-couple equivalent of “you better change your ways or I’m filing for divorce.”

Now that we’ve done a proper literature review of the phenomenon of expelling gasses in space, let’s go back to the question that started it all: “If Maezawa farted in front of you what would you say?”

A thoughtful question like this demands an equally thoughtful response. Considering the whole space context, it’s safe to assume Maezawa is not simply testing respondents’ reaction to flatulence on Earth, but also in space. As we’ve demonstrated, that adds a whole new dimension to this dilemma, considering all the risks involved.

While you could laugh a fart off here on Earth (unless of course your partner is doing it too often, which could be a sign of selfishness), you should show more concern for a space fart — but without sucking the levity out of the situation. With this in mind, a thoughtful response would be something like that:

While they’re not exactly an aphrodisiac, I’ve learned to tolerate your farts. However, since we’re no longer on Earth, I think we need to clear the air (make sure you giggle when you’re saying this in order to nail the timing of this pun). You know I love you, which is why I’m asking you to stop farting in the open, and head to the lavatory next time a wave is bubbling up. As studies have indicated, farts are flammable, and pose a fire hazard in space, which — by extension — threatens our whole relationship. I just want us to make it.

For the record, there are no wrong answers, so feel free to re-word to your liking, as long as you honor the science.

In the meantime, Full Moon Lovers is still accepting applications for female companions. Those interested can hand in their resume here. Good luck on the fart exam.