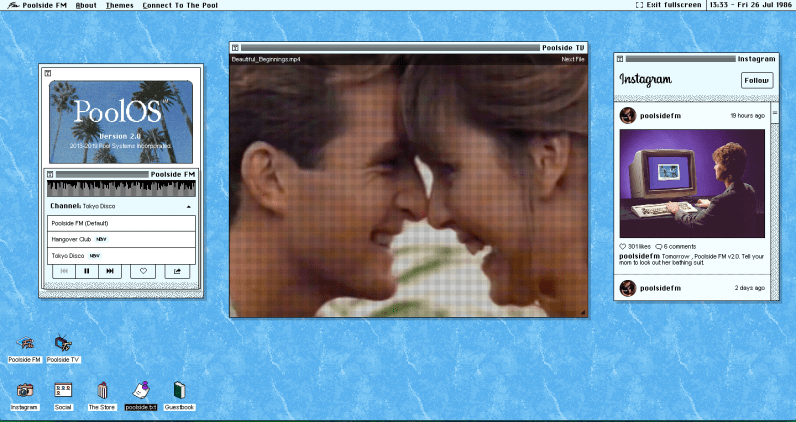 I’m a sucker for old-school operating system aesthetics – especially when they’ve been repurposed to run modern web services. This is why Poolside.FM – a gorgeous music and video feed disguised as a retro Mac OS – immediately piqued my curiosity.

The summer-styled website comes with its own music player, a video player with a selection of 80s and 90s footage to accompany the tunes, and an Instagram launcher that lets your browse through Poolside.FM’s feed. It also lets you choose between five different color themes for its PoolOS layout.

Currently, PoolOS supports three separate playlists – the default Poolside.FM, the Hangover Club, and the Tokyo Disco – to fit your mood. The cool thing is that you can create a PoolOS account to favorite tracks, submit new joints to the playlist, and write in the site’s guestbook.

The design was inspired by some of the most influential OS aesthetics from the 80s and the 90s.

“The main inspiration was Mac OS 9 (which has so many lovely details), but we looked at early Windows and Xerox OS as well,” Poolside.FM designer Niek Dekker told TNW. “We put in extra effort to get the typography and pixel rendering true to that form.”

“I’ve always loved 80s and 90s design, and I knew that nostalgic interface would perfectly match the retro positivity of the tracks and videos,” founder Marty Bell told TNW. “We’ve tried to stitch together as many good-vibes things together as possible to create the ultimate serotonin-inducing, mood-lifting website possible. A virtual getaway in your browser.”

For the record, Poolside.FM has been around for years now, but it just launched its PoolOS redesign today. Here’s what it used to look like in the past:

Check out Poolside.FM’s new look and turn it up like they used to in the 90s by clicking here.