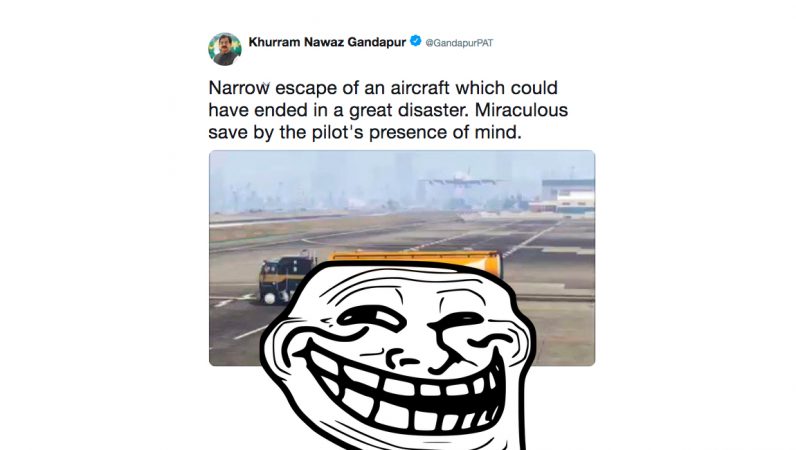 As the world gears up to deal with the confusing future of deep fakes, Pakistani government officials are still struggling to tell apart real world footage from computer-generated imagery.

A local politician was caught praising an aircraft pilot for using their “presence of mind” to narrowly avoid what could’ve been a disastrous collision with a truck. The politician even shared a video of the occurrence. But there’s a catch: the footage wasn’t real – it was an outtake from Rockstar’s iconic game Grand Theft Auto V (GTA V).

“Narrow escape of an aircraft which could have ended in a great disaster,” tweeted Secretary General of Pakistan Awami Tehreek, Khurram Nawaz Gandapur, on July 5. “Miraculous save by the pilot’s presence of mind.”

The politician eventually realized he’d been fooled by CGI and deleted the tweet – but not before eagle-eyed users were able to archive it.

As you can expect, Twitter’s troll army swiftly swarmed Gandapur with ridicule.

“This is a simulation video,” one user wrote. “Such things aren’t possible in real life situations. If so the KLM [and] Panam crash would have been avoided.”

For those curious to have a gander, here’s the original video Gandapur tweeted:

Gandapur is hardly the only Pakistani office qholder to have struggled with tech in recent times.

A couple of weeks back, another local politician made headlines after accidentally turning on the cat filter during a press briefing livestream, which was later uploaded to Facebook. In another similar goof, a Pakistani news anchor confused iPhone-maker Apple Inc with the fruit.

Thanks for the lulz, government officials of Pakistan – keep them coming.