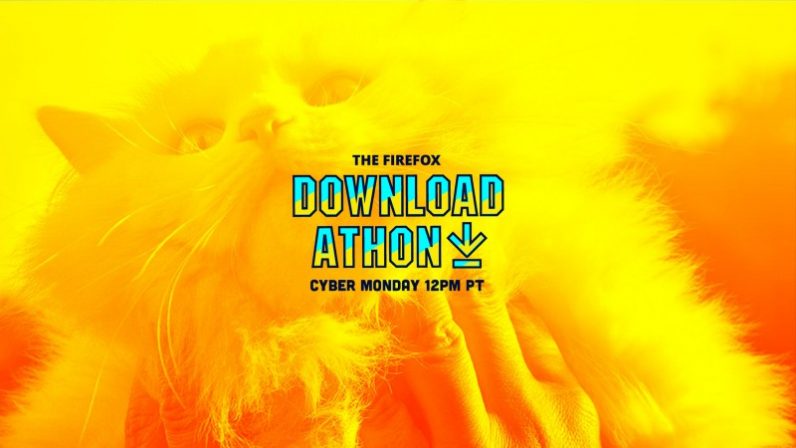 The awfulness of Black Friday has passed. Now, we’re into the awfulness of the (truly porny-sounding) Cyber Monday. To divert our collective attention spans from the myriad of sites trying to get our money, Mozilla is running its first-ever “Download-A-Thon” alongside Open Signal, a public TV station from Portland, Oregon.

What’s a “Download-A-Thon” you ask? Nothing. Mozilla literally just made it up for the purposes of this event.

It sounds interesting though. The event takes place from 12PM Pacific Time, and runs for just shy of ten hours. Mozilla plans to broadcast the download-a-thon over Facebook Live, and it promises to be pretty weird: there’ll be eating contests where the audience can vote for what’s on the menu, an interpretive dance competition, and an improv comedy segment.

We don’t know much more either, but could turn out to be cool. Especially if it keeps us from spending hard earned cash on dumb shit.

Mozilla calls this an “an oasis in the midst of the Cyber Monday insanity,” adding:

Just keep one tab open to the Download-A-Thon and when it feels like the entire internet is a used car salesman trying to bully you out of every dollar, you’ll have an ad-free sanctuary to go laugh and unwind.

Just keep one tab open and when you realized with a shudder that you just spent your last Bitcoin, you’ll have a place to go that hearkens back to a time when the internet was about questionable green screens and innocent doggo memes, not commerce.

Just keep one tab open and when your boss walks by you’ll be just one click away from making it look like you’ve been watching a speed eating contest, not shopping for decorative Nicolas Cage pillows (which are a real thing for real)

Consider our interest piqued. You can read more about it on the Firefox blog, and tune in here.

Read next: Everything you need to know about the TNW contributor platform