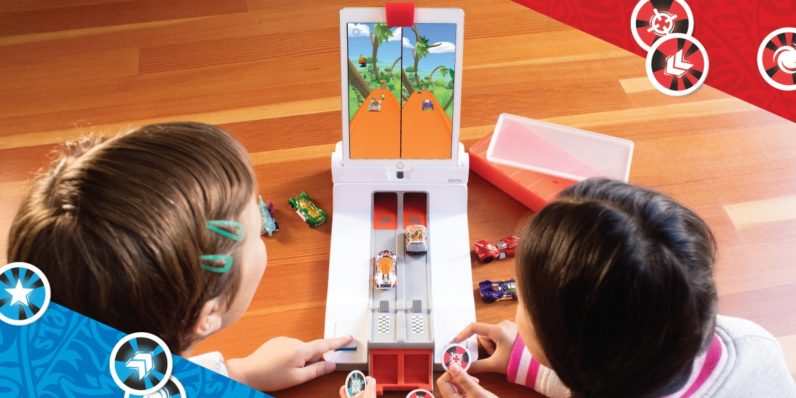 Mattel and Osmo today announced the launch of MindRacers — a new iPad-based game that lets you race the iconic Hot Wheels car toys in an augmented reality world.

The Osmo MindRacers package costs $59, and includes the racetrack, plus a fleet of six Hot Wheels cars to race. Osmo’s iPad stand and camera reflectors — which allow the tablet to pick up on the motions of the cars — are usually sold separately, but are included as part of a $79 kit from Best Buy. It’s a much simpler set-up than the twisting plastic tracks of my childhood, and perhaps a little more tidy.

MindRacer’s gameplay is a mix of physical and virtual. You start the race by hitting the device’s launch button, which sees the cars accelerate on the iPad screen. Then it’s up to you to make it past the finish line. To get ahead, you have to throw tokens in front of the iPad’s camera. These can be used to accelerate, slam into other cars, or use power-ups. To me, it looks like a reverse Pokémon GO, with players throwing real objects at a screen to make the action happen.

In a statement, Pramod Sharma, CEO of Osma, said:

Hot Wheels created an iconic childhood toy by inspiring imaginations with healthy play centered on physical cars. Now, we’re taking that beloved experience and blending it with the power of computer vision and AI to bring these cars to life.

If you enjoyed Hot Wheels as a kid, then you might enjoy getting this modern upgrade on the traditional tracks. Sets are available starting today, and will be on sale on Osmo’s site, Amazon, and Best Buy.

Read next: Google killed a handy safety feature without ever notifying Android users