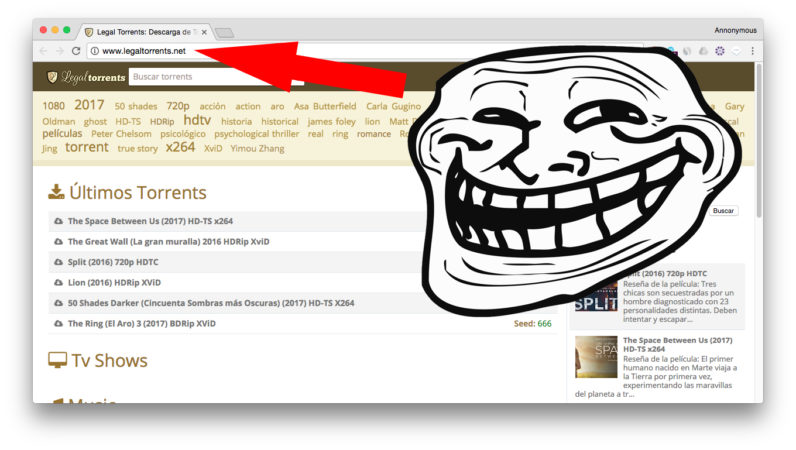 Costa Rican film distributor Romaly has come up with an amusingly elaborate and creative scheme to convert pirates into legitimate customers.

The company has set up a fake clone of popular torrent portal KickassTorrents hoping to lure in illegal downloaders and steer them away from actual torrent sites. Much like the real thing, LegalTorrents.net contains images and screenshots, IMDB rating as well as download links, but all of this is a front.

Once you try to download one of the movies, the website proceeds to play a short trailer of the movie accompanied by a short message warning against the negative effects of piracy. But while most pirates would find this sort of lecturing condescending, Romaly gets one thing right: It offers illegal downloaders something real in return.

To make up for its ‘trickery,’ the company is also providing an email address where pirates can claim two tickets for the movie they’ve been trying to download – entirely free of charge.

“With the creation of our own torrent download page we seek to approach all those who try to carry out this type of illegal action and create awareness on the subject through positive reinforcement,” said Romaly marketing head Alonso Solís to TorrentFreak.

While it’s refreshing to see a company take the peaceful approach to marketing when titans of the movie industry are actively trying to censor the web, Romaly missed one crucial thing – it forgot to really seed the fake torrents.

As pointed out by TorrentFreak and confirmed by TNW, none of the torrents appear to have any seeders… which means no pirate will ever get to download the cheeky hidden message.

Still, we applaud them for their courage. I’d much rather get a friendly lecture and some free tickets than have Hollywood pressure Google and Bing into automatically filtering out all content on torrent sites – much of which is entirely legal to distribute.