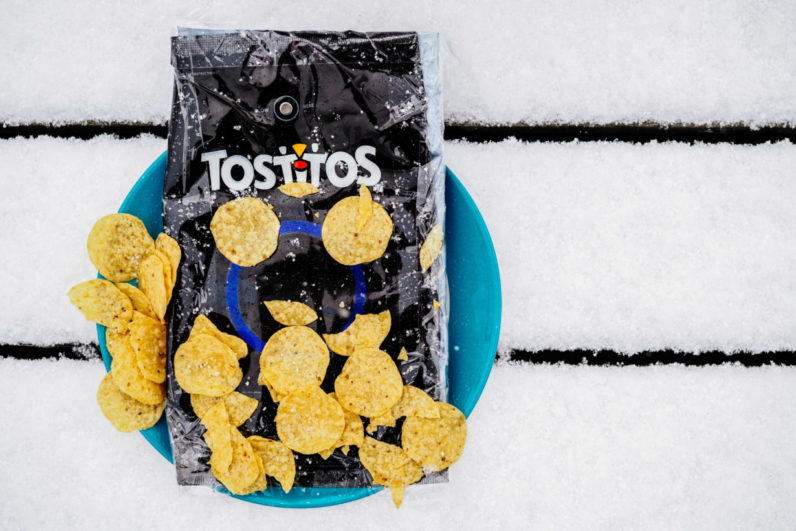 The Super Bowl incites copious consumption of alcohol. While you’re getting wasted, there’s a fair chance you’ll be eating chips too.

As we reported last week, Tostitos thought it could help make sure you get home safely with its latest creation: a bag of tortilla chips with an embedded alcohol sensor. If alcohol is detected in your breath, it’ll help you order an Uber. Genius.

(In all seriousness though, please don’t drink and drive.)

While I pondered the implications of this new technology, it turns out Tostitos had already sent a sample bag to my apartment. A roommate overheard a neighbor say something along the lines of “I can’t believe someone actually bought that!” I would’ve react the same way, mystery neighbor, but I’m just here wondering how Tostitos got my home address.

Unfortunately, Tostito’s chose the wrong writer: Although TNW loves a good party and I like me some tortilla chips, I don’t own a car, don’t care about the Super Bowl, and don’t consume alcohol beyond the occasional accidentally swallowed Listerine.

Still, I carried the (ridiculously oversized) box up to my apartment and opened it up. Inside, I found a cornucopia of protective confetti, a large traditional bag of Tostitos, some cheesy sauce, and the pièce de résistance:

To use it, you first turn it on by holding a corner of the bag.

A blue light will swirl at the front of the bag, mesmerizing you as it boots up. You then blow into a sensor at the top of the bag. It will shine green for clean, red for wasted.

(Tostitos also makes sure to note the bag is not an actual breathalyzer with a numeric value or particular accuracy. It makes no mention of how much alcohol-breath is required to activate it).

If alcohol is detected, you are offered a $50 Uber Code, and you can even tap your phone to open Uber directly. The code is actually printed on the back of the bag, rendering the pseudo-breathalyzer superfluous as you can just type it in. But where’s the fun in that?

The technique takes a little getting used to and a fair bit of air pressure, but I quickly got the hang of it. To my relief, if not surprise, the bag found no alcohol in my system. Phew.

But I mean, does it even really detect alcohol? I don’t drink, so I couldn’t ever get it to go red. Thankfully, another roommate of mine was planning on drinking that night – bless her soul. So around 3AM, I received a photo captioned: “It works!” Huzzah!

Unfortunately, the above Uber offer had apparently run out, even though the code didn’t expire until the night of the Super Bowl. Boooo. (You’re also offered a separate $10 coupon with the other bag of chips in the box, or any other participating Tostitos bag, which is the main point of this whole marketing shebang).

As I brought out a proper camera to take some fancier photos. I was dismayed to find the bag stopped working. So like any good reporter, I had to investigate. Time to open it up!

In a case of bagception, you’ll find the a smaller bag of chips inside (I’d forgotten this thing actually included, you know, tortilla chips).

You can also see the components are hidden within a plastic cover.

Peel an adhesive layer away attaching the plastic to the front of the bag, and you can see the breathalyzer unit, NFC tag, and some ribbon cables. Time to remove the last plastic cover.

Tada! Here’s the final stash of chips, albeit of the silicone variety. Also, I found the source of the problem: the batteries were dead.

Time to put back together. I used some tape, and now it’s basically like new:

Finally, I was ready to take fancy photos on a snowy afternoon. Because tortilla chips are meant to be eaten in any weather.

So, real talk: If you need a bag of chips to tell you if you’re too drunk to drive, you shouldn’t be driving. But as goofy as the entire concept is, I’m in favor of anything that reminds people not to drive while intoxicated.

The company told AdWeek that it’s looking to get 25,000 cars off the road on the night of the Super Bowl Sunday; even if you just have a standard Tostitos bag, you can get $10 off an Uber on Sunday by simply entering the last five digits of the UPC code (more on this here).

Thanks Tostitos. Nice to know that if I decide to start drinking, I’ll be all set.

That's How We Party on Tostitos

Read next: This disposable drone could one day save your life