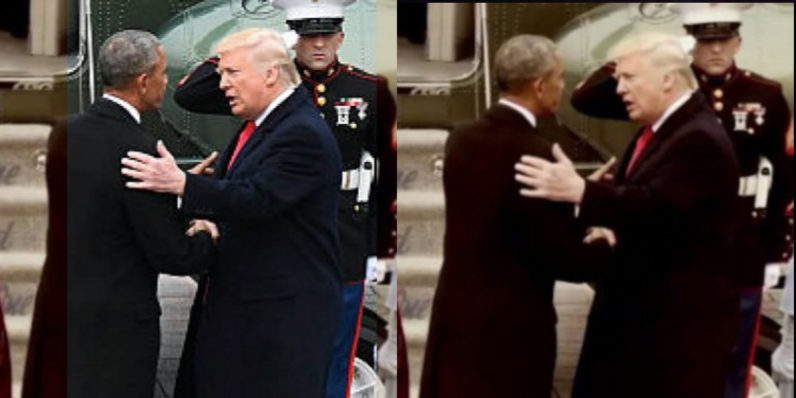 Update (because everyone likes a conclusive answer): Evidence suggests the image shared during the ABC broadcast was not modified from the original stock photo. The original tweet from Dana has since been removed and replaced with an apology, which seems to put this conversation to rest.

Keen eyes and photographs are often all it takes to spell scandal. Granted, this is the sort of scandal that’s more laughable than impeachable, but the keen eye of Dana Schwartz, Arts and Culture writer for the New York Observer seems to have spotted a discrepancy in two Donald Trump pictures — maybe.

The first image, left (and seemingly-altered), is hanging in the White House, as shown on ABC last night. The second image, right, is the original from Getty Images. When overlaid in GIF form, it seems some Trump staffer took the liberty (or was ordered to) make Trump’s hand appear larger.

@DanaSchwartzzz Here, this is the absolute most precise I could get it. The color & contrast changes, but nothing moves. pic.twitter.com/zHFItu8Knx

Others tried to play detective as well.

These Twitter users were quick to point out that the original doesn’t actually appear to be an original, as the one shown on ABC  seems to better match the comparisons of those on the un-altered side.

For you, this means Trump’s small hands prevail, and Photoshop wasn’t the tool used to bring down democracy.

Remember when we argued over simpler things, like the color of a dress?

And here you go: A GIF that I just made. Not aligned perfectly (my fault), but the hand is the same. pic.twitter.com/N7Zii1qRMY

I lined up the Getty Images source file to the White House print. It's a warp deformer, look at the helicopter behind it. pic.twitter.com/kJB2T8U5yh

Funny. I did the same thing. And this is bullshit. https://t.co/xKulBObi3b pic.twitter.com/UsKnLXvviu

So, what do you think? Is the President photoshopping his hands to make them appear bigger?