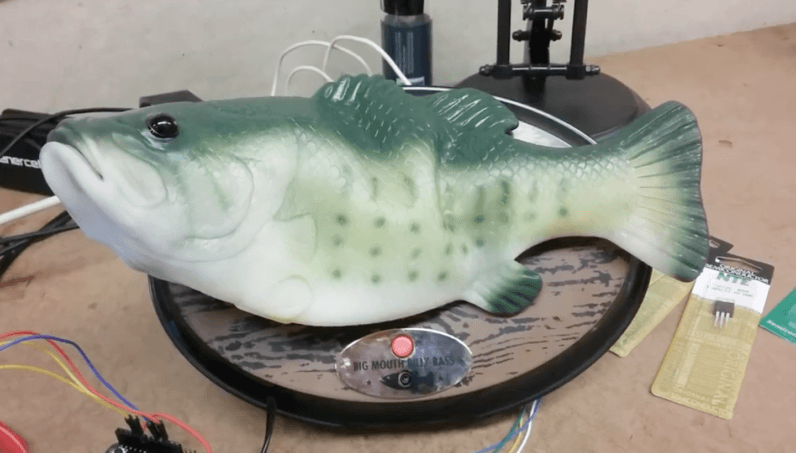 Amazon’s ‘Echo’ is pretty damn cool. You know what’s cooler? Hacking it to work with one of those singing fish your grandparents have been annoying you with since the late 90s.

Artist Brian Kane recently demonstrated what happens when you do just that. He hacked together the soul of Amazon’s smart assistant ‘Alexa’ into the body of a ‘Big Mouth Billy Bass.’ If that’s not worthy of an award, I really must not understand science.

If you haven’t seen a Big Mouth Billy Bass, consider yourself lucky, or European.

These things were all over television once upon a time and you could get yours for the low, low price of $19.95 plus shipping processing, and just a touch of your self-respect. Don’t get pissed if the price has gone up; I haven’t checked in a while.

The fish, unfortunately, sings anytime someone touches the red button beneath him. Some howl in laughter, others turn and run, but Billy, Billy’s seen some stuff and you know he’s just waiting to tell you about it… after he’s done singing ‘Don’t worry, be happy’ for the 30,000th time.

It’s unfortunate that the creator of this ingenious concoction of nostalgia and modern technology didn’t give us a glimpse at how he was able to do it. From the video, it’s hard to tell if he used an Arduino (or Raspberry Pi) and the Alexa API, or if he just stuffed the guts from an Echo into a rubber fish. Either way, bonus points for originality.

Our hats off to you, good sir.

Read next: This awe-inspiring 4k video of the Northern Lights is the perfect start to the weekend