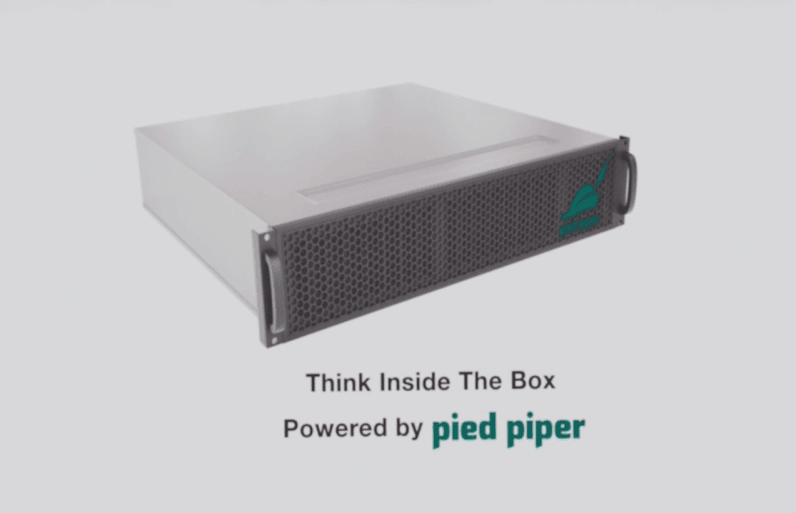 HBO’s ‘Silicon Valley’ is a great show for many reasons: most importantly, it’s freakin’ hilarious – and its ability to satirize the tech industry while maintaining a high level of authenticity is truly commendable.

Spoiler warning before we move forward with this post: If you haven’t seen the second and third episodes of season 3, you might want to return to this afterward.

Anyway, the show keeps it real again tonight with “the box” – a new product by the Jack Barker-ran Pied Piper that has pivoted completely from what Richard originally envisioned with his technology. If this box seems familiar to some of you, it’s because it’s based on a real thing that’s already on the market.

‘Silicon Valley’ teamed up with data infrastructure solutions company SimpliVity to create a spin-off version of its OmniCube that can essentially fit enterprise data centers into a box. In a blog post, the SimpliVity team said the crew visited its headquarters in Massachusetts to learn more about what goes into the OmniBox to order to create a believable prop and realistic scripting.

The lower end model of the SimpliVity OmniCube, which holds four 400GB SSDs and eight 1TB HDDs, starts around $30,000 – so Action Jack wasn’t wrong when he said he was looking to make Pied Piper stocks profitable as quickly as possible.

Season 3 of ‘Silicon Valley’ is already off to a strong start – so keep up with the remaining episodes to see much of a documentary this show actually is.