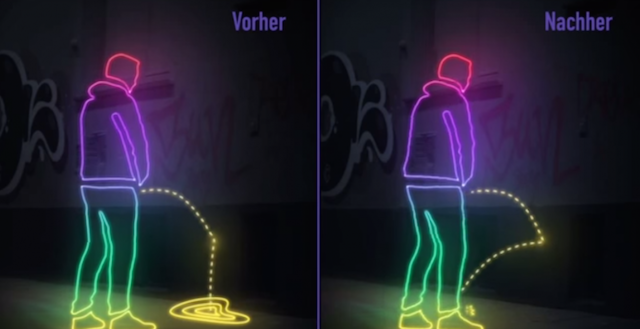 Forget the pay wall, San Franciscans have got a lot more to worry about when it comes to technology infiltrating their daily lives.

To combat public urinators, SF’s Department of Public Works has announced that it has coated nine different walls around the city with hydrophobic paint so those who pee on said wall will get a taste of their own golden shower.

The Ultra-Ever Dry paint has been implemented in a few different use cases before, but not something of this prank-tastic scale.

Testing out a new pee repellent that “pees back” to prevent public urination. pic.twitter.com/6eDJ4w9MWH

Currently, the nine coated walls are located around the Mission and SOMA districts. According to the San Francisco Chronicle, it costs several hundred dollars per wall to get a coat of the pee-repelling paint. But if the pilot program works out well, the city will expand the paint job to other neighborhoods have consistently received requests to remove urine from walls.

“The team that did the testing [were] excited because the liquid bounces back more than we thought it would,” Public Works chief Mohammed Nuru told the Chronicle. “We will send people to see, visually, if there are any wet signs to indicate urination has happened.”

I’m not a dude, but I assume the easy way to work around this is to just pee a few steps away from the wall, or go in at an angle. After all, those who pee in public probably have minimal regard for whoever might be watching.

Who will win San Francisco’s pee-gate? We’ll have to wait and see how this elaborate joke plays out between the city and those with poor bladder controls. Meanwhile, those with dogs might want to watch where they let their pups take a leak as well.

➤ Pee on these S.F. walls? Be prepared for them to pee back [SF Gate]

Read next: A 250-year history of music subscription services